I just learned that Jerry B. Jenkins has closed the Christian Writers Guild.

And that news brought back a host of memories. Jerry didn’t start the Christian Writers Guild; that was done by another man.

Back in the fall of 1972, I was newly married and working as a supply teacher in a new city.

I’d always wanted to write, so, with my husband’s encouragement, I took a correspondence course from Norman Rohrer. Because I’d been thinking so much about teens, it seemed natural that my first stories were aimed at teenagers. I’d seen his ad in various magazines many times. “I Fire Writers!” His address was La Canada (soft c), California. I found that amusing for some reason.

Norm apparently started the Christian Writers Guild in 1965 in order to raise the quality of Christian writing.

I paid my money—not a huge amount as I recall—I think around $150. 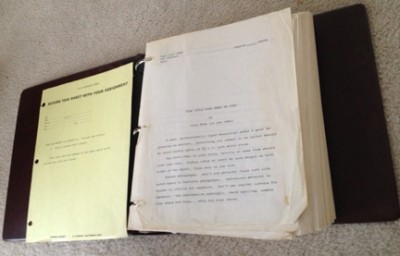 Before long a large brown binder showed up.

Each lesson had information followed by a yellow page with the assignment.  (See photo on the right.)

You had two years to complete the course.

Some of the topics were: 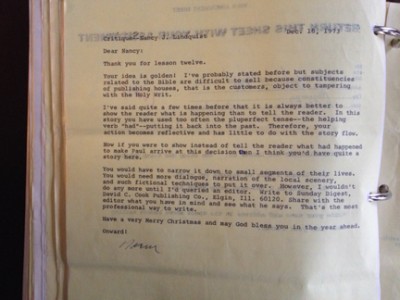 I’d write my assignments by hand and then type them on an old typewriter I could barely navigate, and mail them to him. (More than 15 books published and I still don’t know how to type!)

Norm would go over the assignments and type a response on the back of the assignment sheet. He’d first tell me what I’d done well and then give me suggestions as to how my work could be improved, and mail everything back. (See photo on left.)

If he thought what I’d written might have publishing potential, he’d offer suggestions as to places to submit.

Overall, he liked my work. But I got sidetracked. I never actually finished all the assignments. I managed to do roughly half of them. The fiction half.

A short story somehow grew and grew, and I eventually finished one novel and parts of two others before the two years was up. I realized I had little interest in nonfiction so I didn’t worry about completing the rest of the course.

Norm’s last letter to me (yes, I still have it) said he’d love to introduce me to editors. But I was stuck in the Canadian prairies, and he was in California, and there was no social media in those days. So aside from having one article and one short story published (I think it was published—I never got a copy), nothing much happened. And by then I was busy with a young family and church leadership. It wasn’t until 1991 that my first book was published.

I started teaching and mentoring other writers in 1992 and co-founded The Word Guild , a Canadian writing community, in the fall of 2001 (officially January 2002). My goal has always been to pass on what I’ve learned, just as Norm passed his knowledge to me.

Norm kept on until 2003,  at which point author Jerry B. Jenkins purchased the Guild from him. Norm remained on the Editorial Board. It became the Jerry B. Jenkins Christian Writers Guild. And more recently began publishing. And today it closed.

Would I have become a writer without Norm Rohrer? I’m honestly not sure. He gave me not only the information I needed but the encouragement to keep at it. He helped me believe that I had the ability to write without glossing over the things I needed to learn or making me think it would be a breeze. And all these years later, I’m still at it; not only writing my own books but also helping other writers raise the quality of their work.

Even though $150 in those days was a lot more than it is today, given the number of hours he spent going over my assignments and writing his responses, I’m pretty sure he lost money on the deal. In other words, he really was doing it to help writers, and not looking for ways to part them from their money.

The world of publishing is going through a huge number of changes right now and no one knows where we’re going to end up.  I have to say I’m in favour of much that’s happening. Even though I’d had three royalty publishers, I long ago gave up on the old model where publishers controlled what made it into print and on the shelves of bookstores. Anyone who thinks the best books sell the most copies needs to take another look at the way the system works.

What I do find sad in the closing of the Guild is that I tried to find a bio of Norm online and failed. But then, it’s not unusual for us to fail to remember and honour those who have paved the way for us.

You can see some of Norman Rohrer’s books here.