Basketballs in the Living Room Are Part of Life 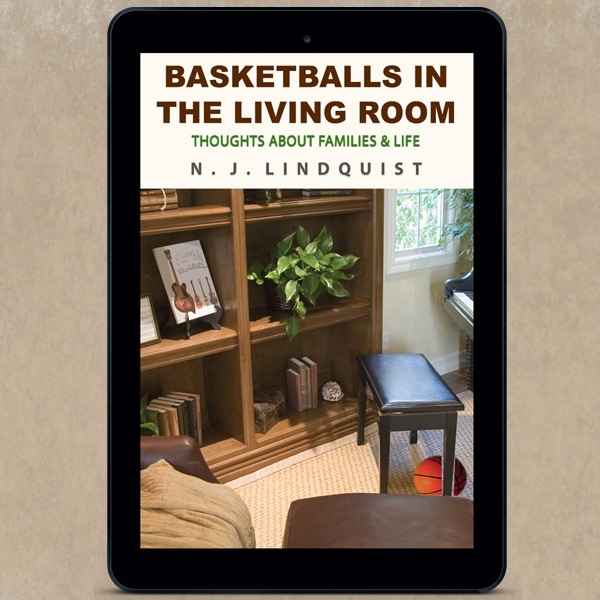 While entertaining guests in our living room one day, I happened to glance under the piano bench, and there in all its splendour sat—a basketball.

Was I embarrassed? Well, yes. But I remembered, not for the first time, a column by Erma Bombeck I read years ago. It was about her embarrassment at having a basketball in the living room when an important visitor dropped by.

With four active sons, I’ve had my share of basketballs in the living room—and soccer balls, volleyballs, footballs, baseballs, tennis balls, frisbees...I could go on. But the neat thing is that because of Erma’s column, I’ve been able to smile and say, “Erma would understand.”

As long as I can remember, I’ve enjoyed columns about ordinary life. As a child and teenager, I rushed to get the newspaper first so I could read Gregory Clark. Later, it was Erma. It was my dream to one day write like them.

At university, I double-majored in Psychology and English, and I found the combination very meaningful—the one giving great insight into the other.

But practical matters needed to come first. Instead of living in a garret with my journals, I opted for teaching high school. (Much better pay.) And then came marriage and kids and....

When my husband and I moved from western Canada to Toronto, I thought it would be neat to write a column from the viewpoint of a newcomer to the city. I even managed to put a few thoughts on paper. But with three children under four—there was no time for more. And soon I discovered Gary Lautens, who wrote for the Toronto Star. Like Gregory and Erma, Gary helped me see ordinary things in a new way. Though I was living in a strange city where I knew no one, I wasn’t alone as long as I could read Gary’s column.

Time passed. In 1986 we were transferred to Markham after a year in Calgary. More experiences.

But I was busy homeschooling three kids while looking after an active toddler, added in 1984. No time yet to write.

When Gary Lautens died suddenly, there was such a hole where his column used to be that I longed to be able to write—not for the sake of writing, but because I missed his insights.

Quietly, I began to put down ideas as they came to me. Perhaps some day.... One by one, my children went off to high school and my homeschooling load diminished.

Shortly after my youngest son turned five, I began to find time to write. In fact, during the next eight years, I turned out over 60 magazine articles, several short stories, four novels for teens, a mystery....but never a column. In 2001, I decided the time had finally come, so I set some goals. What I wanted to write was the kind of column I’ve always enjoyed--talking about day-to-day life from a positive viewpoint.

I began by buying every “how-to write a column” book or tape I could find. I also attended a workshop taught by an experienced columnist. Afterwards, I pulled out the ideas I had jotted down over the years. Yes, there were things I could talk about. And there are other things, too. Having lived this long—over half a century—I have accumulated a whole host of experiences and ideas. And all of them will fit into my theme: life is what we live each minute of the day—good or bad, boring or joyous, tragic or comedic—and we need to make the best of it. By the middle of October I had 10 columns written.

Now came the hard part. I dusted off my business suit and made the journey to the Economist-Sun office, and...there I was—a columnist!

That job lasted exactly five months, but I loved every minute of it. Right up until a new publisher bought the paper and fired all freelance writers on the spot!

Today, my sons are grown up and I have three grandchildren. And my writing is doing okay. I have 12 books in print with my name on them and others on the way.

But I still have all these thoughts about life that I want to share with others. I could have dusted off my resume and gone down, cap in hand to an editor. But...this is so easy!

So I write about all sorts of things that matter to ordinary people: living in community, handling relationships, homemaking, juggling a career, raising children, living with teenagers, becoming an in-law and grandparent, taking responsibility for elderly parents, being aware of the environment, making it through the day, and, of course, not losing your cool when you find a basketball in your living room. :)

This is the first column in my book, Basketballs in the Living Room., which you can buy or read on Amazon.

On taking things for granted

On taking things for granted

Can’t I Buy Groceries Without Getting Depressed?

Can’t I Buy Groceries Without Getting Depressed?