Looking back, I realize that my symptoms had begun at least five years earlier. 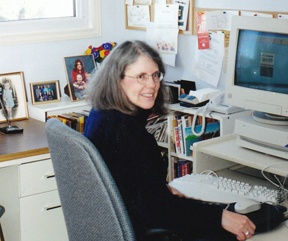 I was often tired. My bed time kept getting earlier. I had to drag myself out of bed in the morning. My skin, especially on my back, was itchy. I bought lotions and bath oils to use but they only eased it a little. My hair, which had always been naturally wavy, became dry and straight—like straw in a broom.

I had periods of depression where I felt tired and unable to cope. Words I was looking for—usually words I knew well, would completely evaporate when I needed them. I knew I was getting older. But did I just have to accept it?

I took an assortment of vitamins. I tried to exercise, but it was an uphill battle to find the energy. I told my doctor, but he could find nothing wrong.

For the first time in my life I gained weight and considered dieting. But again, weight-gain is “normal” for women my age.

By Christmas of 1998, I could no longer handle making meals. My husband took that over along with everything else. I felt tired and worn-out and worthless.

One day I realized I had all the symptoms of clinical depression. A light went on. I do not get depressed. In every other way, my life was going great—I had no reason to be depressed. There must be a physical reason.

In January, I had a complete checkup and went on hormones because I was post-menopausal. Much of the depression lifted, but the tiredness, the dry skin, all the rest, remained.

I would lie on the couch and be hungry. It was too much effort to even go and get an apple out of the fridge. I would have to get up, walk there, open the fridge door, open the crisper drawer, reach in, get the apple, close everything, wash the apple, bite into it, chew it, do something with the core…no, it was too much for me.

My doctor said my thyroid level was a bit high but didn’t require treatment.

I was thrilled by his first words—something tangible we could treat! And depressed by the next—how high did it have to get before it was bad enough?

I hit the Internet and found books. I became convinced low thyroid was my problem, but how could I persuade my doctor it was already bad enough to treat?

He tested it again a few months later. A little higher but not high enough. He had learned the rules in medical school. You treated it at a certain number. Or if it became more serious. Like if you had swollen feet and ankles.

He sent me to a specialist who, quite frankly, was rude, inconsiderate, and patronizing. He, too, knew the rules: not high enough to treat. If only my body had known.

At the end of summer, I went back to my doctor, this time armed with a book that listed the symptoms of hypo (not enough) thyroidism.

I set out the book and said, “I have all but a couple of these symptoms. Please do something!”

Sighing, he reached for his notepad. “We can do another blood test.”

As an afterthought, I rolled up my pant leg and added, “Oh, yes, I also have a rash on my ankles. We went to the Ex two days ago. Funny. I had something like this once before when we were at Disneyworld. Several years ago, in fact. I thought that was caused by the low-voltage shocks in one of the exhibits. But there was nothing like that at the Ex. It seems to be a rash of some sort.”

He took one look at my “rash” and said, “It’s tiny capillaries bursting because of swelling.”

That was the only low-thyroid symptom I hadn’t had!

Then and there he wrote out a prescription for synthetic thyroid.

In September of 1999, my doctor put me on synthetic thyroid medication for hypothyroidism. We have been monitoring it ever since to make sure it gets to the optimum level and stays there. All of my symptoms have completely disappeared. 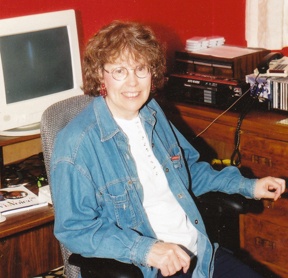 In April of 2000 I cut my hair because I wanted to see if my “new growth” was as dry and straight as the old. My hair came out soft and wavy—almost curly. (See the photo which was taken that day. No, the colour didn’t change—I had decided earlier to cover the grey. :)) After that, I had long-time friends not recognize me. It wasn’t just the hair—I looked younger, more alive.

I told people that the change they saw on the outside was a reflection of how I felt inside. I had energy once more! Enthusiasm. My mind was back! Mentally and physically, I felt like a new person.

My symptoms had come on so slowly and gradually that I truly forgot what it felt like to have energy.

And I almost didn’t have the strength to fight it.

No, my thyroid level never came close to the number (10) at which my doctor thought he should treat it. I have talked to other women whose doctors treated them when their level reached 3. I now tell anyone who is as high as 3 to persuade her/his doctor to do something!

See these web sites for helpful information about symptoms and so forth.

Thyroid Sourcebook: Everything You Need to Know by M. Sara Rosenthal, Robert Volpe

If you have a book or web site to recommended, please add it in a comment. And yes, having hyper (too much) thyroid can also be a big problem.