N. J. Lindquist Closes a Chapter at The Word Guild and Write! Canada to Focus on Writing

Markham, Ontario—After helping to equip Canada’s Christian writers for 11 years, N. J. Lindquist is stepping aside from all leadership roles in Write! Canada and The Word Guild in order to concentrate on her own writing and speaking career.

Lindquist is an award-winning Markham-based writer, editor, publisher, and speaker who has authored 10 books, edited and published two bestselling Hot Apple Cider books, and spoken at conferences and churches across Canada. In 2001, together with writer Wendy Elaine Nelles of Toronto, Ont., and backed by a small group of writers and editors, as well as Lindquist’s husband Les, she co-founded The Word Guild and assumed responsibility for directing it as well as Canada’s largest Christian writers’ conference.

“We started The Word Guild,” Lindquist explained, “to connect and develop Canada’s Christian writing and publishing community, with the long-term vision of impacting the Canadian cultural landscape. On a personal level, I’m passionate about seeing people become everything God created them to be. I also strongly believe Christians ought to work together and lead in both creativity and excellence.”

She added, “Over the 24 years that I’ve been involved with the Write! Canada conference, and the last 11 years with The Word Guild, it’s been amazing to see what God has done in bringing hundreds of people together to work as a team, encouraging and challenging one another.” 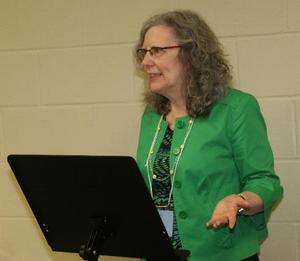 The Word Guild, a national organization of writers, editors, and speakers who share a Christian worldview, has grown to 350 members. It provides professional development for both beginners and professionals through multiple channels, including writing contests and awards, newsletters, Internet discussion groups, manuscript critiques, workshops, and conferences.

During her years with The Word Guild, Lindquist has worked in a number of areas, including serving as executive director until 2008; revamping and directing the conference; expanding the awards programs; creating and maintaining websites; teaching at Write! events across Canada; representing The Word Guild at numerous events such as Word on the Street, Book Expo, Equip, and Church Library Association of Ontario conferences. She’s also been heavily involved in strategic planning, public relations, and advertising. Except for small honoraria, this has all been done as a full-time volunteer.

Lindquist and Nelles both received the Leading Women Award for outstanding achievement in Communications and Media in 2006, for their work in co-founding The Word Guild. Bill Fledderus, senior editor of Faith Today magazine, said at the time, “Lindquist and Nelles have raised the bar for excellence in their sector of Christian ministry and encouraged many young and aspiring writers to make a difference in Canada through the written and spoken word.” 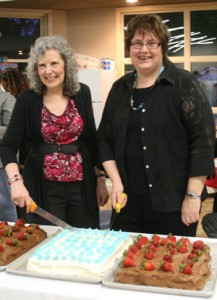 In recent years, Lindquist has continued to invest many hours in behind-the-scenes work in The Word Guild, including evaluating several hundred books as part of the judging panel for the Grace Irwin Award. In order to ensure the continuation of the Write! Canada conference, she also committed to directing the 2011 and 2012 editions while developing more volunteers who could assume future responsibilities for this flagship event.

“I’m really looking forward to devoting all my energies to my own writing and speaking career from now on,” Lindquist remarked. In particular, she wants to finish a memoir, LoveChild: Life Lessons from an Ugly Duckling, which will focus on how God was there for her long before she became aware of Him. She’s also recently chosen a pseudonym—J. A. Menzies—which she’ll use to write more adult mysteries.

As well, Lindquist will continue speaking and teaching in both Canada and the United States, beginning this January at Breakforth Canada 2013 in Edmonton, the largest equipping and renewal conference in North America. She’ll teach a pre-conference writing intensive learning workshop, “The Ministry, Art, Craft & Business of Writing,” plus two additional sessions.

“Establishing a new organization takes many hours of hard work, on many levels. N.J. Lindquist’s ability to see the big picture, while recognizing which details are essential, has been invaluable to the setup and development of The Word Guild. Her commitment, sacrifice, work ethic, and faith have underlined her belief that God has been in this organization from the beginning. It’s been a pleasure to work alongside N. J. and to learn from her. I’m delighted that she is now able to concentrate on her own writing and speaking,” said Denise Rumble, The Word Guild’s Managing Director.

More information about The Word Guild can be found at https://thewordguild.com.