A Birthmother Remembers – My Review of the Book, The House of the Broken Two 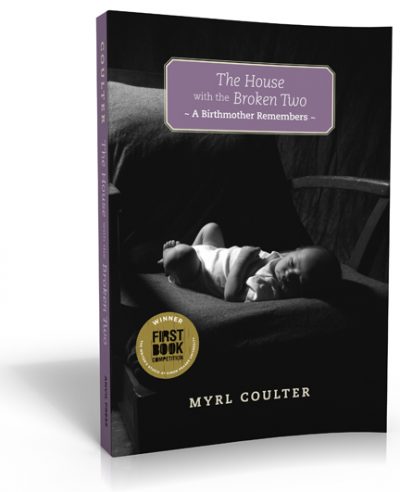 After deciding I wanted to learn more about what it was like for a woman in Canada’s prairies to be an unwed mother in the late 1940s to the late 1960s, I was pleased to discover our local library had a book written by a woman who grew up in Winnipeg, Manitoba.

In 1968, I was a 20-year-old student in my final year of university in Brandon, Manitoba. Myrl Counter, the author of this book, was an 18-year-old high school graduate who was about to have a baby, but not become a mother.

The House with the Broken Two: A Birthmother Remembers
Myrl Coulter
Published by Anvil Press Publishers, Inc., in 2011
Winner of the First Book Competition by The Writers Studio at Simon Fraser University

1. She was from Winnipeg, Manitoba.

I grew up in a small town a couple of hours from Winnipeg, and had often visited the city with my parents for both business (my dad went to the wholesales there to order stock for his clothing store) and pleasure (many of my mother’s relatives lived there). Plus, after getting my BA, I lived in Winnipeg for more than a year to further my education. So I knew the area very well. Reading a book where you know the location makes it that much more real.

2. Although many of the people Myrl had to deal with seemed to look down on her, she was simply a “normal” teenager who got caught up in the moment and wasn’t actually sure what she was doing or what the consequences might be.

There was very little information given to kids in those days. Myrl says, “My memory is somewhat fuzzy here, but I think that’s where we finally had sex…. Afterwards, I do remember being puzzled by what all the fuss was about. I wasn’t even certain we really had ‘gone all the way.’ If we had, I thought (and kept this thought to myself), this thing called sex was a little disappointing.” P. 78

As I recall, my sex education consisted of a pamphlet my mother got from a public health nurse who was a friend of my hers. She gave it to me to read around the time I started menstruating. Anything else I learned from books, magazines, television, or movies. I realized that I could very easily have been in Myrl’s shoes. I’d had boyfriends. While I chose to wait for marriage, something could have easily happened to overrule that choice.

I knew at least one teenage girl a year or two older than me who left town for a few months. My mother told me that it was because she was pregnant. So I knew what happened to you if you got pregnant, but that was about it. I don’t remember ever talking about it with any of my peers. I think part of the reason for the lack of communication from one generation of women to another was that the previous generation didn’t have much information either, and found that difficult to acknowledge. I remember Mom telling me that her only teaching about sex was from her mother the day before she got married when my grandmother basically told her that sex might hurt but to endure it.

3. As the daughter of a young woman who gave birth to me but then gave me up for adoption (through no desire of her own) just as Myrl had done, I was very interested in the physical and emotional details Myrl shared.

Myrl’s parents’ reaction was to hide her pregnancy. Make it go away. Which was a normal reaction for many families at those times. “Unmarried women did not keep their babies in the sixties. I was to discover during the next year than any young woman in my situation who dared to say that she might keep her baby was immediately discouraged from doing so. Whether from a parent, a doctor, or a social worker, the message was always the same: you have nothing to offer a child; you’re not ready to be a mother; you’re being selfish; you’ll be ruining his or her chances for a good life; you’ll have more children when you’re ready and forget all about this one. Underlying these professional words of advice was also the tacit suggestion that an unmarried teenage girl who was pregnant either lacked good moral character or was psychologically deficient, or both.” P. 80

My own birth mother has told me how little she understood about what had happened to her (no sex education at all), and how she really had no choice as to what would happen to me. She wasn’t even certain she was pregnant until she was seven months along, at which point her parents drove her to a home for unwed girls in Regina which I assume was much like the one Myrl went to. Like Myrl’s, my grandparents’ instinct was to hide the pregnancy and pretend it hadn’t happened.

My birthmother also told me that her mother was annoyed they didn’t find out she was pregnant earlier so they could have “done something about it.” My birth mother says she was so glad abortion wasn’t an option.

Myrl chose not to even consider an abortion—which in those days was illegal and much more risky than today. She says, “My aversion to abortion was more than just being terrified about the process itself. I also knew that I didn’t want to harm the little life growing inside me. I wanted to do everything I could to make sure that my baby was born healthy. I didn’t realize that the time that I was already feeling what my society was convinced I couldn’t offer my child: maternal love.” P. 82

As for the homes, Myrl says, “To call those places maternity homes is a highly ironic misnomer: maternity homes were not homes, nor did they function to promote maternity. They were institutions to house and hide those deemed maternally inappropriate.” P. 84

4. I related in many ways to Myrl’s assessment of what life was like for women in her mother’s age group in those days.

My mother (and to some extent my birth mother, too) were products of the culture that evolved after World War II. It directly affected how they looked at themselves and their worth. After the war, with the men returning home, even women who had been encouraged to work because of the shortage of men during the war were now encouraged to stay home and be wives and mothers.

Myrl writes of her mother, “She became [a} mother… during the June Cleaver and Betty Anderson era, those television versions of motherhood that refused to acknowledge women is anything but mothers, that denied them their multiple talents and unrealized potential, that erased them as thinking beings capable of contributing to life beyond that stupid, imaginary white picket fence that may as well have been constructed out of barbed wire.

“Completely indoctrinated into their social climate, many women who became mothers in that suffocating era totally lost touch with who they were or could have been. Any visions they may have had of themselves that fell outside society’s version of how good wives and mothers should behave soon dissipated as the realities of their domestic lives took over. As they grew older women like my mother needed reassurance that they had performed their prescribed roles successfully and appropriately. They needed this reassurance so that they would never have to see how the rigidity of their society’s values and beliefs had constricted their lives.

“Indeed, I don’t think women like my mother could’ve handled the realization that the trajectory of their lives had been shaped by anything other than their own freely made choices. In fact, I think that if they suddenly did have insight into how their culture had trapped them, the realization of what they had lost would be too much. To avoid this realization, women like my mother worked hard to hang onto the very structures that contained them.” Page 161-162

My mother, after working from the age of 16, had married at 27 and become a stay-at-home wife. However, she was unable to complete her role by having a child. Ten years after their marriage, she and my dad were finally able to adopt a child. They had wanted to adopt two, but decided they couldn’t afford to raise more than one.

My mother struggled with various illnesses as well as “nerves” all of her life. I really wonder how much of it was depression because she didn’t enjoy housework or cooking and was likely bored to tears much of the time. She was also an extrovert, but never learned to drive a car, so she was far too dependent on my dad. Without newspapers to read and Johnny Carson to watch at night after Dad had gone to bed, I’m not sure she would have survived.

For a brief time, I was the centre of her world, but when I left home at eighteen, she had a nervous breakdown. I know my dad did everything he could, but much of the problem was the culture of the times. Ironically, some of her happiest years were later in life after my dad sold his store and they moved to the small city of Brandon. Mom got a job at a new Reitmans store and became one of their best clerks, working well past the age when she was “supposed” to retire.

5. Much later in life, Myrl realized she’d been lied to.

She says, “I remembered what the den mothers at the home and the social worker had told me: it’ll be like it never happened, you’ll have other children, you’ll forget about this one. I didn’t yet recognize the biggest lie I’ve ever heard. Birthmothers never forget.” P. 94

One of the first things my birthmother told me when we spoke was that she’d prayed for me every single day.

I’ll have a lot more to say about this last point in upcoming reviews.

I thought The House of the Broken Two: a Birthmother Remembers, was very well-written. I was cheering Myrl on, hoping for a happy ending, as I read her story. And I wasn’t disappointed.

I highly recommend this book to any woman or man who gave up a child for adoption, who was an adopted child, who is an adoptive parent, or who works with women.

More information about this book and links to stores