Outside the Gate: The Inspiring True Story of an Orphaned Girl Who Survived the Abusive Canadian Foster System 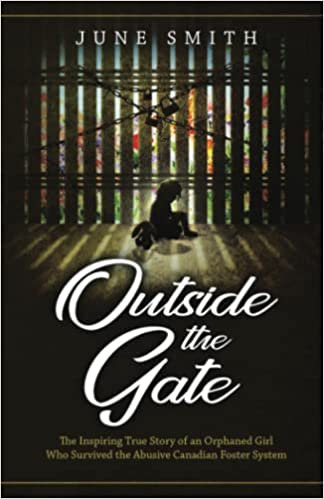 I've reviewed a number of books about birth mothers and adoption. This book is similar in many ways, yet different. It's about a young child who was forcibly taken from her mother and put into the foster child system, where she was never given the chance to be adopted by a loving family.

A friend of mine, who was herself a foster child before being adopted, gave me the book. I started reading it late at night and finished it the next morning. It's pretty much impossible to put down.

Outside the Gate is written from the viewpoint of a little girl who survives the many abuses that come her way.

The storyteller, June Smith, was four years old and living in Toronto when she and her six-year-old brother were taken from their cold, dingy basement apartment by child welfare workers, separated, and made Wards of the Crown by the Canadian Child Welfare System. (The picture above is of June and her brother Freddie at 3 and 5.)

June was declared an orphan and sent to an orphanage for young girls. She was safe there, at least for a time. And her memories of that happy place and one of the women in particular helped her through the worst times. But she had no idea what was happening to her or why. And she longed for her brother, who had been her constant companion.

When June was seven, she was deemed old enough to be put into a foster home, and her life changed again.

First there came the inspections. Later came the foster homes she was placed in, neither of which should have passed a responsible inspection.

Eventually, afraid for her life and trying to protect herself, this sensitive, intelligent little girl was declared "incorrigible."

What bothered me the most throughout the book was that no one ever explained anything to June about what was to happen or why. And when she tried to explain what was happening to her, she was either ignored or talked over by adults who thought they knew better, or perhaps just didn't care. No one listened to her. It was all threats. "Do this. Don't do that. Or else."

I found this lack of communication horrendous. As a mother, I explained everything to my kids as they were growing up, whether they were old enough to fully understood or not. I believe that when a child understands what's happening and why they should or shouldn't act in certain ways or say certain things, and when they can ask questions and give their opinions, they not only grow in their understanding, but they learn to trust. When they're simply given rules and threatened if they disobey, they learn to hide their emotions and either pretend to agree or become bullies themselves.

Incredibly, June survived, and her story has a happy ending.

I highly recommend Outside the Gate to anyone who has children, works with children, or struggles with memories from their own past.