So where do birds sleep? Presumably in trees. Had the small bird been afraid to stay in the tree, even with an adult? Had it tried to get back into the nest, and either be unable to do so, or possibly prevented from doing so by its parents?

I honestly have no idea whether it was a smart idea or a foolish one, but Baby Robin had created its own sleeping spot on the narrow ledge next to the window above our door, not far from the nest.

When I came down the stairs on the morning of May 29th, my eyes, from habit, began to look up, preparing to check the nest for the mother bird. But something stopped me. 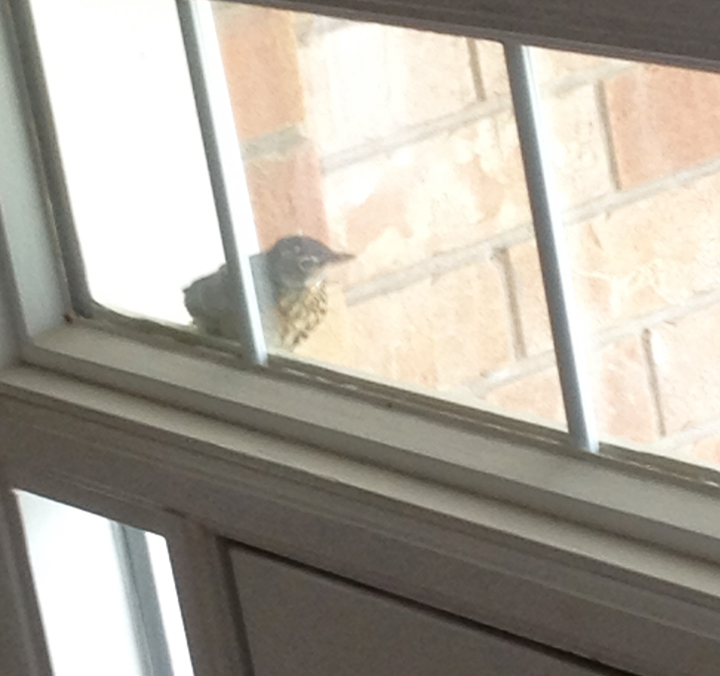 Wondering if the adults had left their baby behind, I looked around.

And, of course, there was Mama Robin, sitting on the post she had flown to so many times after we'd disturbed her—the same post from which she'd often looked me in the eye as if daring me to try something. 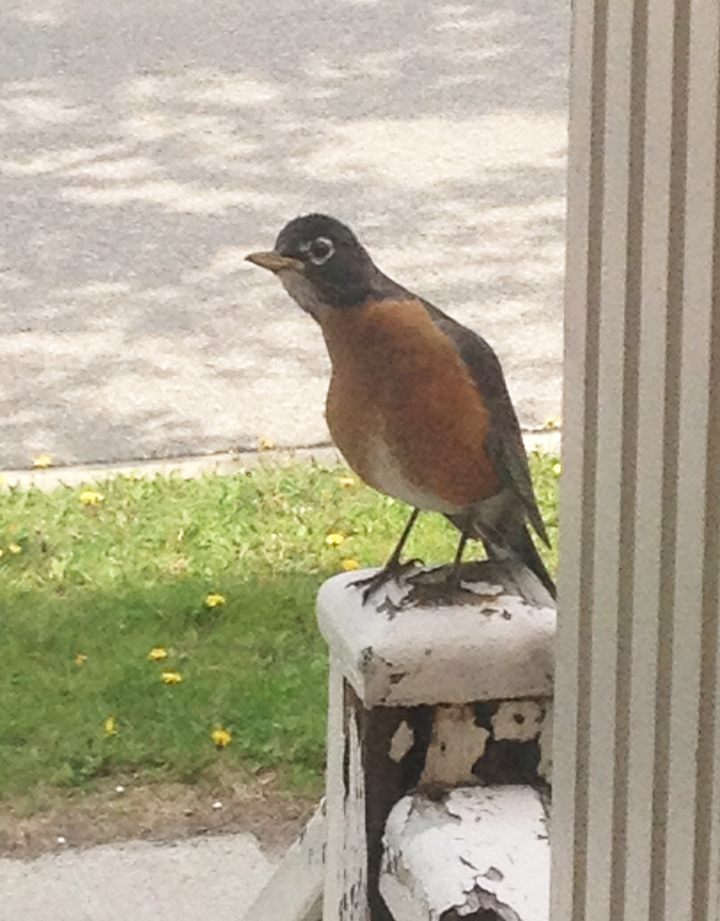 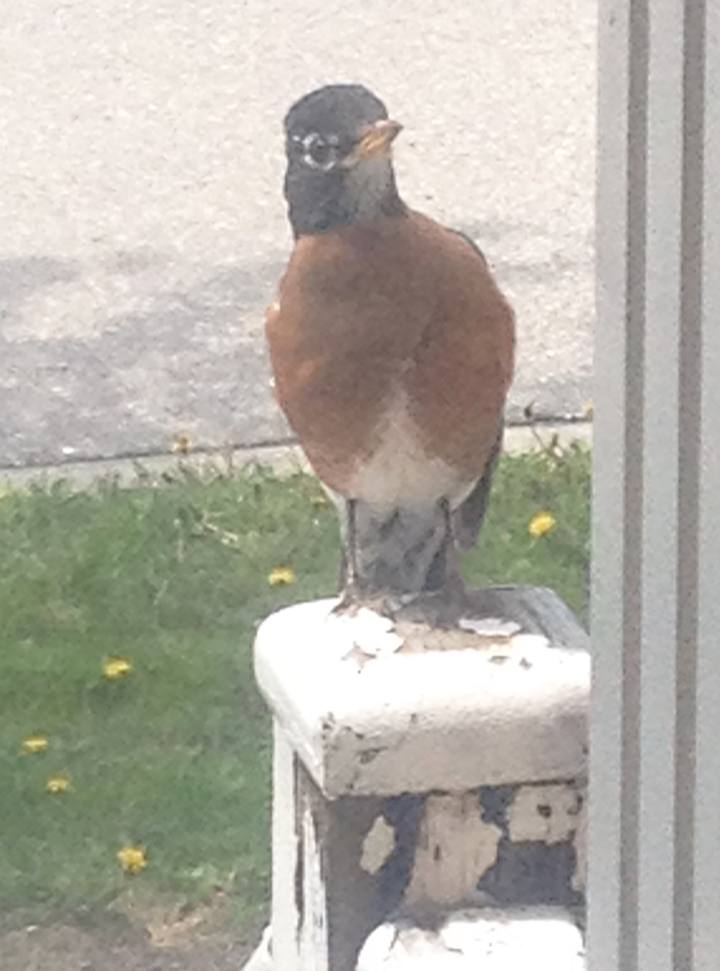 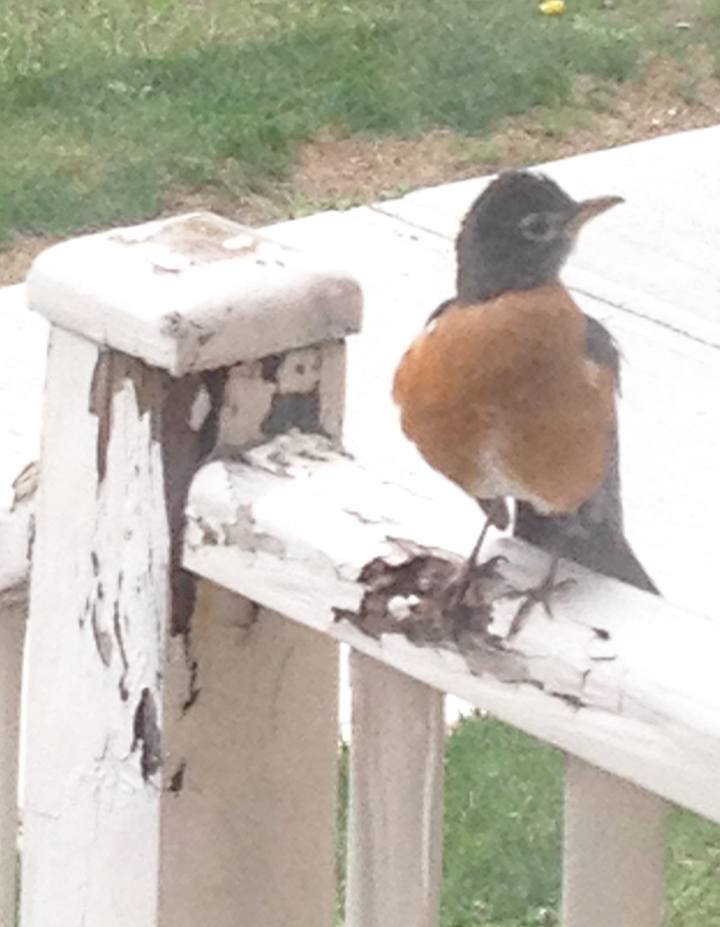 I looked toward the trees. Yes, Papa Robin was still in the area, too.

Over the next hour or so, Baby Robin stayed on the window ledge, moving a few inches now and then.

At one point that morning, I saw Mama Robin in the nest.

And Mama and Baby on the bannister again.

I love this picture of the two of them! Mama Robin looks so fierce! And Baby Robin so trusting. 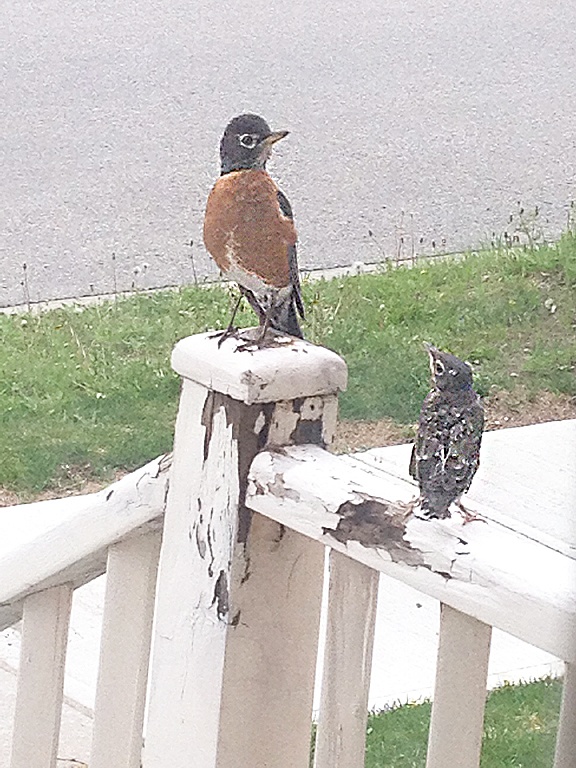 But I got busy, and didn't look out front again until later in the day.

I didn't see them. They were likely in a nearby tree, but no longer making the nest or our front steps their home base.

I really don't know if there was a second baby in the nest that I hadn't seen, and it had flown away with them that day or not.

We never saw any broken eggshells. Apparently robins are known for keeping the area around their nest clean so predators don't see evidence of their continued presence.

The next morning, May 30th, there was no baby robin on the ledge, and no sign of any robins in the area.

A few days later, I was in our back lane and I thought I caught a glimpse of a young robin near our neighbour's house.

I also saw one who looked a lot like the mother grabbing a raspberry from a bush at another neighbour's house. I tried to get a picture but it flew away.

A week passed. I decided they must have moved to a new area, perhaps to join other robins.

We had a lot going on, so a couple more weeks passed, but eventually we had time to make plans to get the railing replaced and redo our front yard. We started the process for someone to come and start the upgrade.

I discovered I had so many pictures of robins that they needed their own folder.

I wrote a blog about the robins, and prepared to move on.

But no one thought to take down the old nest... 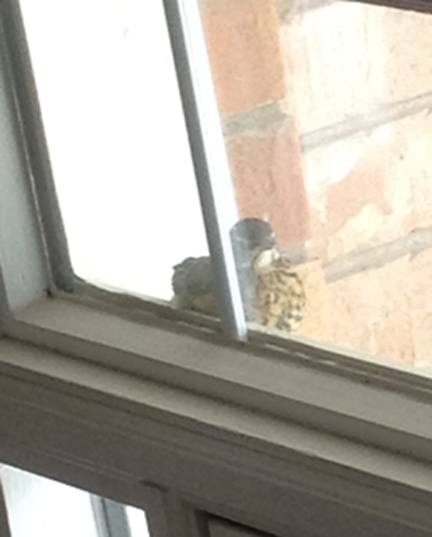