“All of our ancestors live within each one of us whether we are aware of it or not.”

My mother's heritage/ancestry was very important to her. She often reminisced about the few stories she'd heard. Especially her father's side of the family.

So, before we go further, I'm going to share with you some of the things I've learned over the years about my parents' families and ancestry.

I love discovering hints about how people become who they are.

Maybe this is where I should mention that my degree is in psychology as well as English, and although I never actually became a psychologist, (a story for another day) I'm always interested in discovering clues about what makes people who they are. And that most definitely included my parents.

Naturally, the more you know about someone's family and how they were raised, the more clues you have.

However, I’m going from rather limited documentation here. My Uncle Hughie’s oldest son Dale MacDonald and his wife Barbara tracked down a lot of information a number of years ago. I got that from my mother. Some things I tracking down on Ancestry.com, etc. And a  fellow-writer, Gloria Phillips, was a big help. She even found my great grandparents’ wedding certificate!

The first person I’m aware of is Duncan McDonald, who was apparently known as Duncan the Civil. He was my mother’s great, great grandfather. He lived in Inverness County, Scotland, and he married Jessie Macdonald from Dornoch, Southerland Shire.

Duncan’s son, Alexander McDonald, was born at Fort Augustus on the Caledonian Canal in 1815. (That’s near Loch Ness for those like me who have no idea where anything is in Scotland.)

Alexander came to Canada in about 1832. (By my math, that would have made him about 17.) According to reports, he became “a big powerful man with black curly hair, a true man and good, a staunch Liberal in politics.” He took part in the rising under William Lyon MacKenzie in 1837, and was forced to flee to the United States for three years until the trouble had passed away.

Alexander married Mary Macpherson, the daughter of Hugh Macpherson and Mary Fraser of Strathcrae/Strathcare. Alexander and his family settled in Ontario, in Dundas Wentworth County, at West Flamboro, Bullock’s corners, where he worked as a blacksmith and their children were born. In 1849 they moved to Puslinch in Wellington County, Ontario.

Alexander was buried in the Crown Cemetery at Puslinch, along with his two sons, John and Hugh. There were at least three girls and two other sons, including Alexander Jr., who was born in 1857. 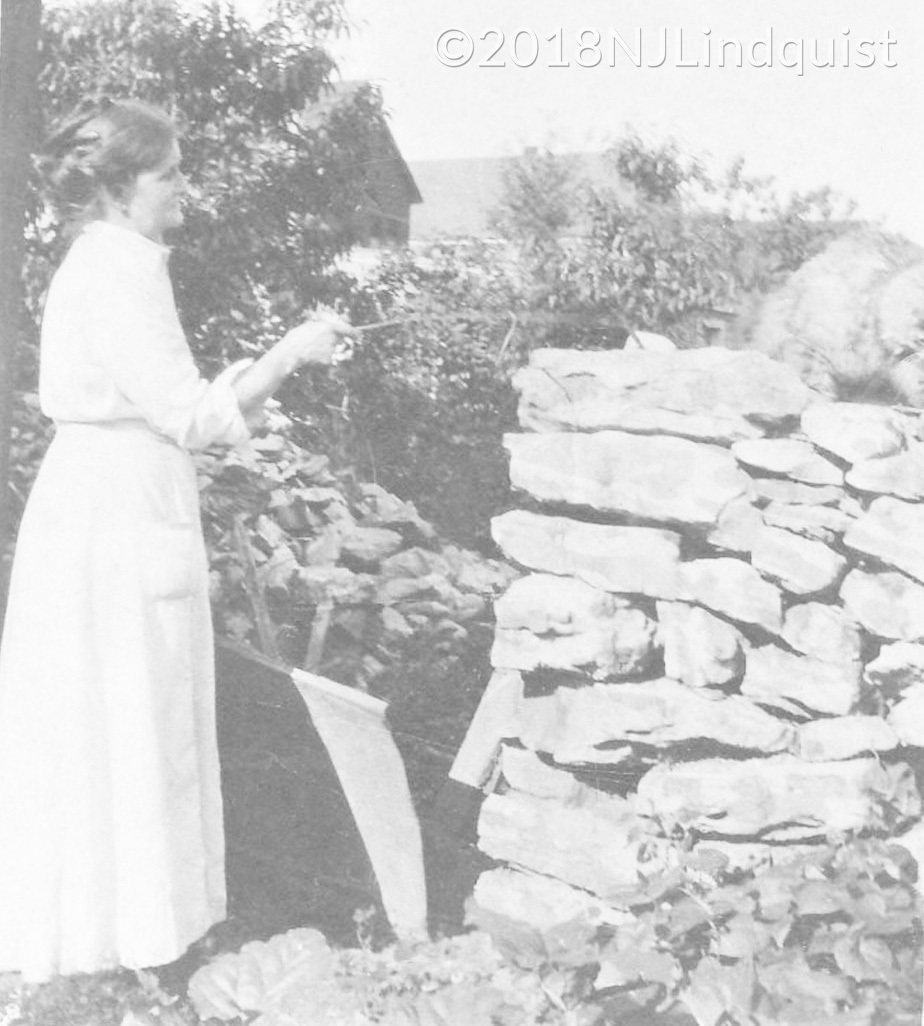 Anna and a large cat

In 1881, at the age of 23, Alexander Jr. married 17-year-old Margaret Ann (Anna) Casselman, the daughter of William and Jane Casselman, in Orillia, Ontario. William was a hotelkeeper, and he and his wife had seven children, of whom Anna was the eldest.

The picture here shows Anna with their 32-pound cat, who is sitting on the right at the top of the stone wall.

According to his marriage license, Alexander was a “filer” and according to the 1881 Canadian census for Simcoe North, he was a “sawyer,” both occupations being connected with working with saws, sawing wood, and might include working in the logging industry or a sawmill, or even being a carpenter.

Alexander and Anna appear to have made their home in a settlement on Georgian Bay originally called Hogg, but later named Victoria Harbour. There were lumber mills in that area from the 1830s on. The Victoria Harbor Lumber Company was at one point the second-largest lumber mill operation in Canada and the third-largest in North America.

Unfortunately, I haven't been able to get any more information about the Casselman ancestors beyond Anna's parents and their family.

Alexander and Anna had two children: a daughter, Olive Margaret, who was born in 1881, and a son, William Bruce, born October 20, l883.

This is the only picture Mom had of her Aunt Olive and her father (Bruce) when they were children. It was taken by a photographer in Orillia, Ontario.

However, in 1885, perhaps soon after this picture was taken, Anna emigrated to the United States with her children, where she lived in Buffalo and worked as a baker while also renting out at least one room to a boarder. 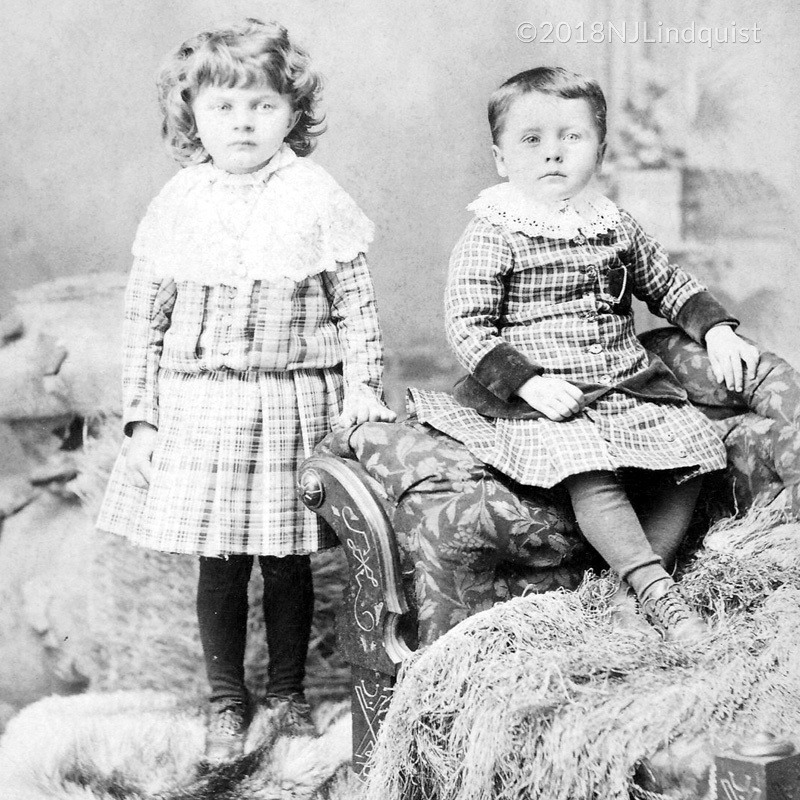 While Olive and Bruce were with their mother for most of the time, they seem to have visited or lived at least part of the time with members of Anna’s family. For example, the 1881 Canadian census shows 10-year-old Olive and 8-year-old Bruce living with Anna’s sister, Sarah, and her husband, Dan Grant, in the Orillia area.

However, the 1900 U. S. census shows both Olive (age 19) and Bruce (age 17) living with their mother in Buffalo, where Olive was a clerk in the bakery and Bruce was attending school. I'm not sure why McDonald became Macdonald, but it did. Anna, Olive, and Bruce used MacDonald on this census.

A 1906 Canadian census shows 20-year-old Bruce McDonald as a boarder in Assiniboine east in Saskatchewan. 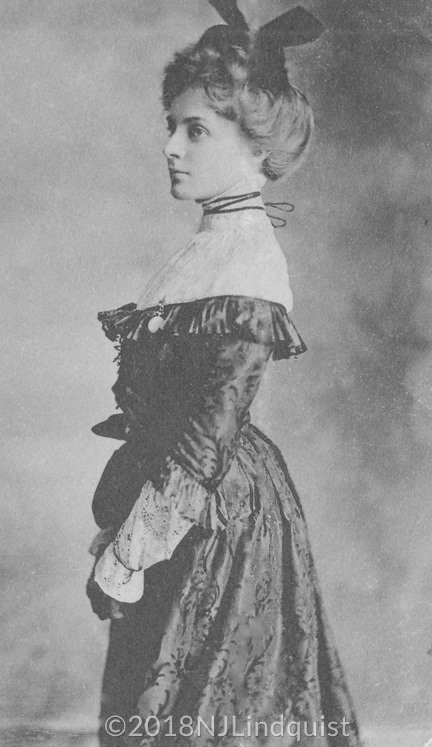 My mother's grandmother, Anna MacDonald, died in California in 1923. They never met.

I found this poem written in blue ink in large letters on a large yellowed sheet of paper among Mom’s letters. It appears to have been written by Olive and sent to Bruce's family. 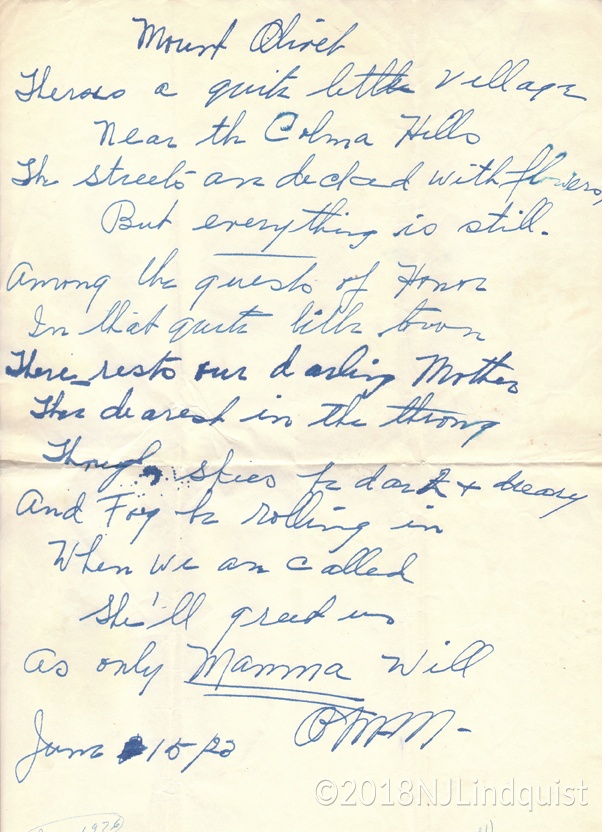 Mount Olivet
There’s a quiet little village
Near the Colma Hills
The streets are decked with flowers
But everything is still
Among the guests of Honor
In that quiet little town,
There rests our darling Mother
The dearest in the throng.
Though skies be dark and dreary
And fog be rolling in
When we are called, she’ll greet us
As only a Mama will.

From what I've been able to discover, Mom's grandfather, Alexander McDonald Jr., who she also never met, died at Powasson, Ontario, on April 14th, 1937, where he owned a woodmill. He was buried at the village cemetery. Powasson is just a little south of North Bay, Ontario.

I can only guess why Anna left, or why Alexander seemed to have no interest in his children. Of course, as a writer, I could easily imagine things. But instead, I feel sad because I know his parents actions affected my grandfather and his children—especially my mother.

Mom was actually quite proud of the fact that her family had distant connections with a few important Canadians.

Alexander McDonald senior’s mother had two brothers who were killed in the massacre that followed on the battle of Ticonderoga between the French and British in the days of Wolf and Montcalm.

The explorer Simon Fraser was also connected through marriage.

One of the members of the MacDonald family, Black Donald, was with the forces of General Wolf at the capture of Quebec. He was killed in the sortie at St. Foy in March after the fall of Quebec.

John, a son of Duncan the Civil, was a surveyor and civil engineer. He was appointed Sheriff of the County of Hurand and Goderich Ont. John married one of the Ryersons, a relative of Dr. Eggerton Ryerson of the Methodist Church Publishing House Toronto, Ont.

A brother of Duncan the Civil, Jonathan, was a newspaper man and owned the Inverness Courier.

Dr. John Macdonald, a Gaelic preacher, known as “The Apostle of the North” was also related to the family of Duncan the Civil.

When family history isn't written down or passed on, it's easy for things—even people—to be lost. Is there a story you need to write down or pass on to your children?

Are there secrets in your family? Or maybe black holes with no information? Could you do some detective work?