More From the Year I Was Six

I need to make it clear that most of the things I'm posting from the past are things Mom saved (and that survived various moves and a couple of unhappy events, primarily an attack by moths and a basement flood (will detail them later). Obviously, the things she kept meant something to her.

The fact that I've kept them is due to the fact that I find it hard to give or throw away things that have memories attached. Which turned out to be a good thing when I decided to write a memoir. (Why do I feel I need a smiley face here?)

So, we come to the certificate below, which shows that I graduated from Baby Band to Mission Band at the United Church in Crystal City on June 14, 1954.

1. I find it really odd that they kept us in the "Baby" Band until we were six. I'm sure I didn't realize that's what it was called or I'd have been highly offended. Did they really think we were still babies? I doubt if anything much changed with the new group, except that I and the other children who were my age were now the youngest instead of the oldest.

2. I don't have any specific memories about what we did or the leaders, but I assume it must have made an impact on me. I loved learning and doing new things, so that would have been a plus. I do know I was always happy to go.

3. What I find interesting, and rather appropriate, is the photo of children of a variety of ethnicities. We are all one race—the human race. And we ought to play and work together in harmony as this picture suggests.

The picture reminds me of a song I've sung many times. No doubt you know it, too. It was written long before I was born.

all the children of the world,

red and yellow, black and white,

they are precious in his sight,

Jesus loves the little children of the world.

4. At the same time, I find it horrifying that the so-called Sixties Scoop, in which more than 20,000 babies and young children of First Nation, Métis, or Inuit families were forcibly taken from their homes and parents and either given to white families to be adopted or put in abusive Residential homes, actually began in 1951.  And the United Church was one of the groups that participated in this. In fact, there was a United Church residential school in Brandon, where my grandmother and several of my aunts and uncles lived.

Of course, I wasn't aware of any of this then. I lived in a small town—really a village, where everyone was white. 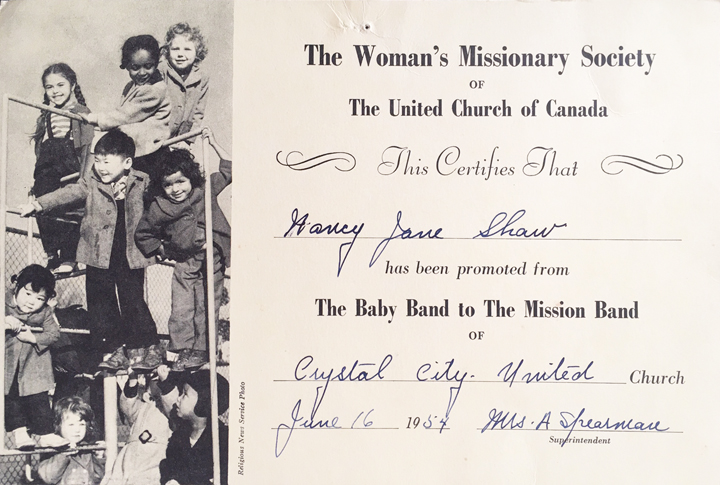 A Reminder That We Had an Extended Family

My mother's sister Brucie gave birth to a daughter, who became my cousin. In this picture, we had driven to Winnipeg, and stayed at my aunt and uncle's house in Charleswood.

I had a lot of cousins, especially on my dad's side, but most of them were quite a bit older than me. Although six years younger, Shelley was the closest female cousin to my age. 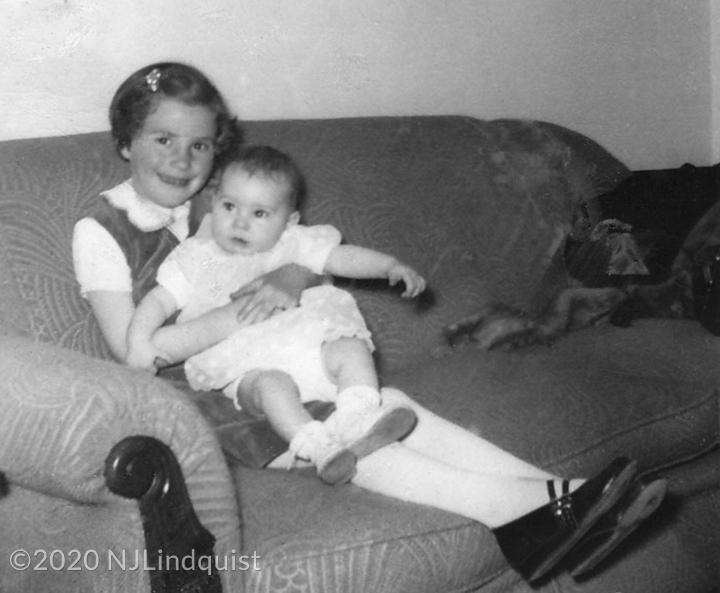 Meeting my cousin Shelley for the first time. 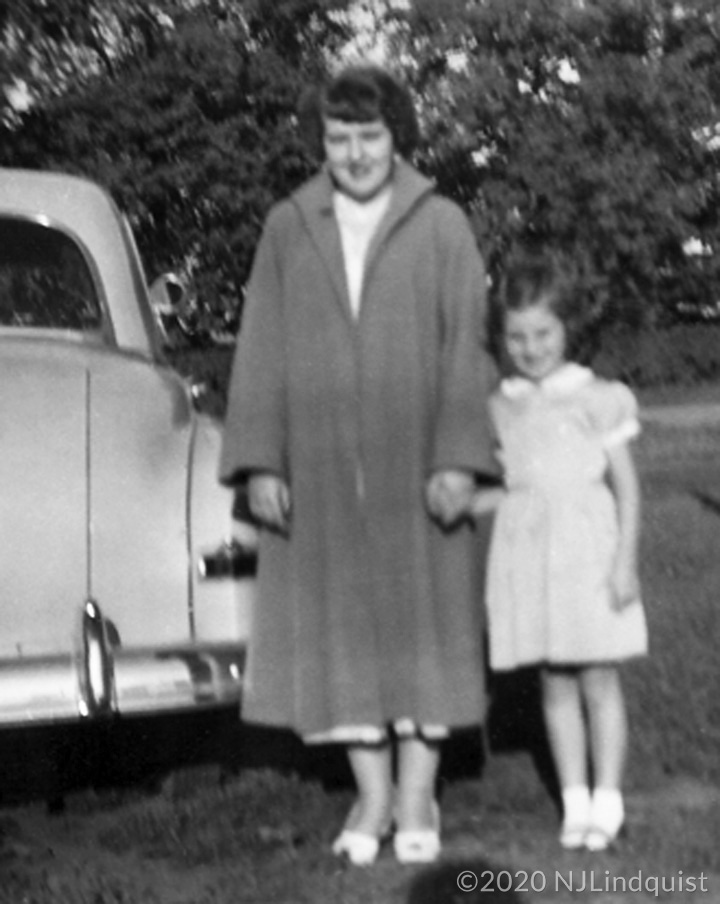 My cousin Joan, me, and Dad's new car.

Speaking of cousins, this is me with my cousin Joan, who was my dad's younger sister Jean's daughter. She and her dad and mom had come to visit us in Crystal City.

Although Joan is roughly ten years older than me, we still stay in touch and she gave me a few pictures, including this one.

There were a few other female cousins in my dad's family who are or were around Joan's age. I'll post a few more pictures of them later.

I should probably mention that I loved any chance we had to get together with members of Mom's or Dad's extended families. Many of the kids I knew in Crystal City had extended families who lived in the area. Some even had cousins who were in the same church or the same grade at school. But my family—the three of us—were newcomers to the town, and we had no roots there, so in a way we didn't quite belong.

And yes, even at six, I realized that we were somewhat different because we were new to the town and we had no relatives living close by.

Being with Mom's or Dad's families, even though it was infrequent, reassured me that the three of us weren't all alone in the world the way it sometimes felt.

I wish I had a memory of my first day at school, but I don't. For me, it was a simple matter of walking across the road and entering the building, so that made it easy. I'd been watching kids go in and out of the school for two years and of course I wanted to see for myself what happened.

I know that Mom was sad and happy at the same time. I was growing up and I'd be gone all day, so she'd be alone except for Bozo and Tippy. At the same time, she knew I needed to be with the other kids and to be learning.

Since Dad only had grade 8 and Mom grade 10, they weren't that well educated and I'm sure they were somewhat concerned for me. But they knew I was a fast learner, and I expect Mom was somewhat relieved that I'd have someone else to talk to when I had questions she couldn't answer.

I was in a split grade 1/2 class, and I already knew many of the kids from living nearby, going to the same church, or because their parents knew my parents. Dad in particular got to know a lot of people because of the store.

The teacher was Miss Gilbert. She was an older woman. I believe her hair was white, and she'd been teaching for quite a while. Of course, when I say older, I'm thinking sixties or seventies, but she was likely in her late forties or early fifties. Many of my teachers seem to have been much younger than I thought they were.

And yes, Mom kept a picture of the grade 1s. I debated whether or not to post it, but I decided that I would because for all I know, my mother is the only one who kept a copy and someone out there might like to see it. Mom also wrote almost all of the names on the back. I don't remember everyone but I do remember most, in particular Louise, Diane, Barbara, Judy, Margaret, Guy, Royden, and Ian. I do have a picture of my teacher, and I'll post it in a couple of weeks when I get to grade 2.

Yes, I'm in the back row on the right.  I'm a little baffled, because I always thought the girls had uniforms, but only Louise and I are wearing them. So did we have uniforms or not? Maybe we didn't have to wear them on picture day, or maybe it was a choice? It sure looks like a uniform.

What Do I Remember About School That Year?

Dick and Jane and Sally and Spot and Puff. Those were the characters (boy, girl, dog, cat) in our primary readers. When I got a new book, I took it home with me and sat at the dining room table with Mom or Dad or both and excitedly read the book over and over and over until I basically had it memorized.... Seriously, I could already read when I went to school, but I was so thrilled to have something new to read that I couldn't get enough.

I'll close with Christmas that year because Mom kept two Christmas cards that were both for me.

The first is from Granny Shaw. It's funny because Mom and Dad always referred to her as "Granny Shaw" (except when Dad called her Mother), but I see that she signed my card "Grandma Shaw." 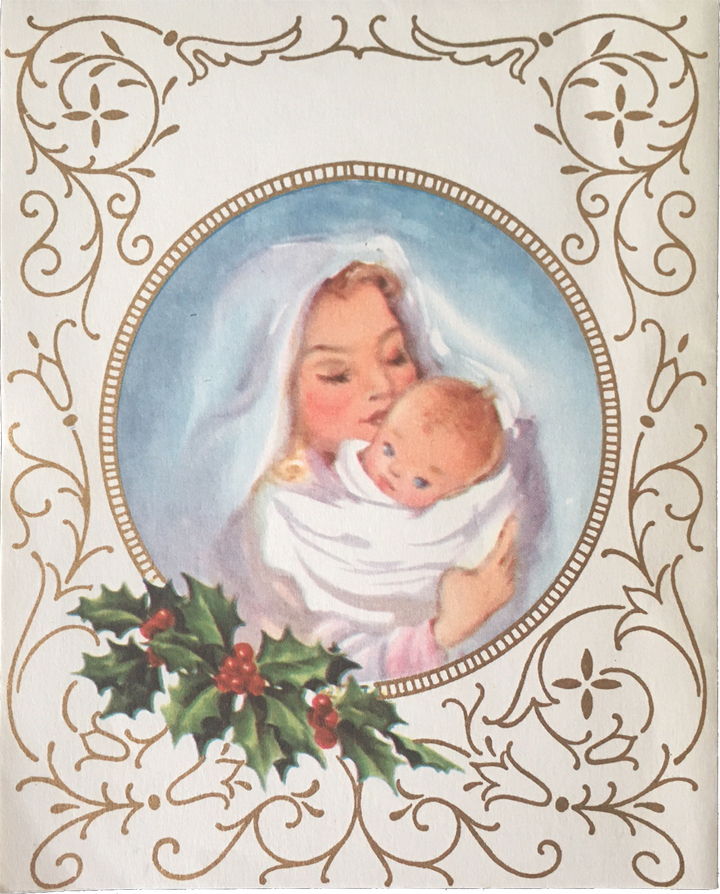 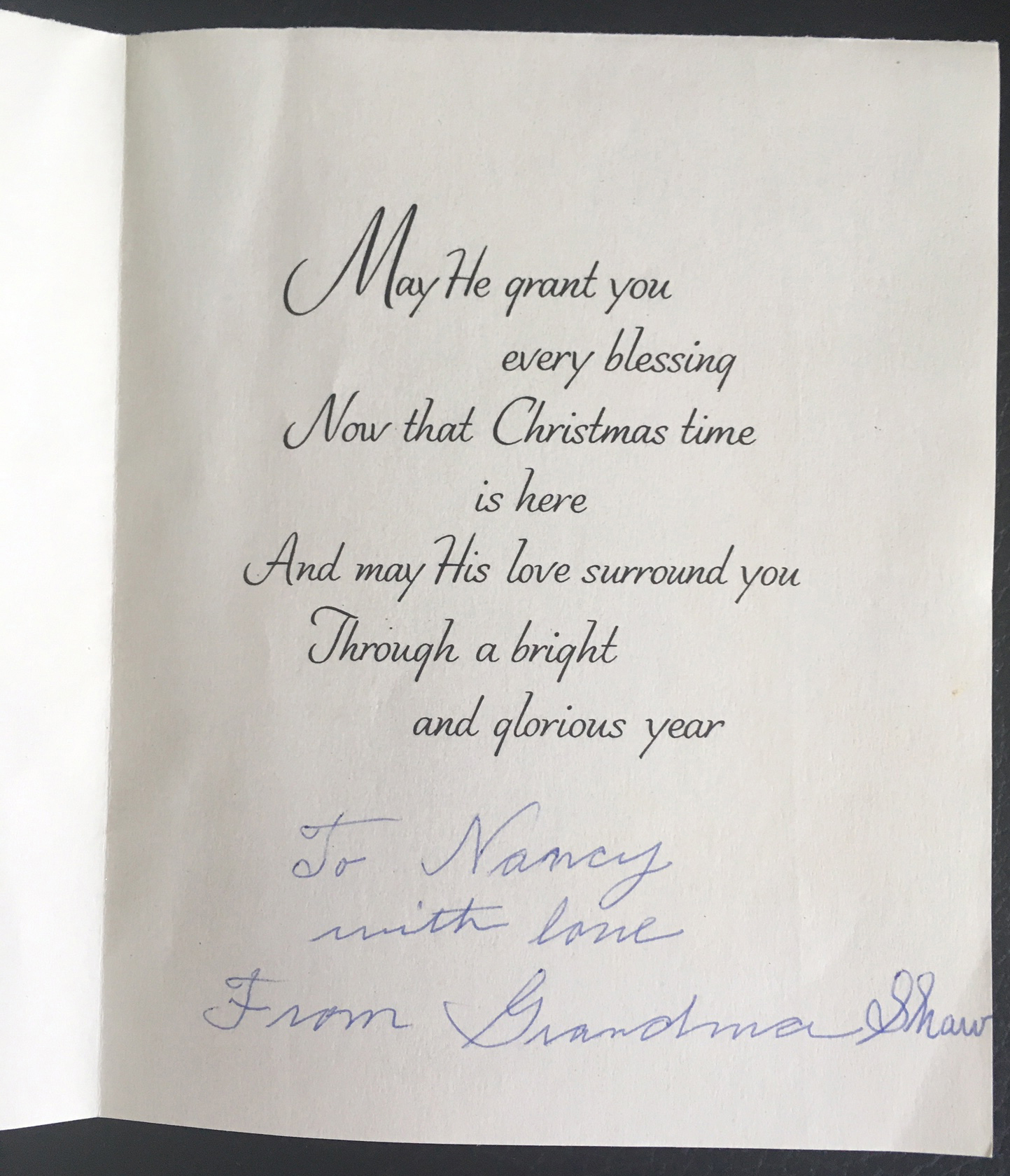 The second card is from Mom and Dad. Of course, Mom signed it. She always wrote the letters and signed things. 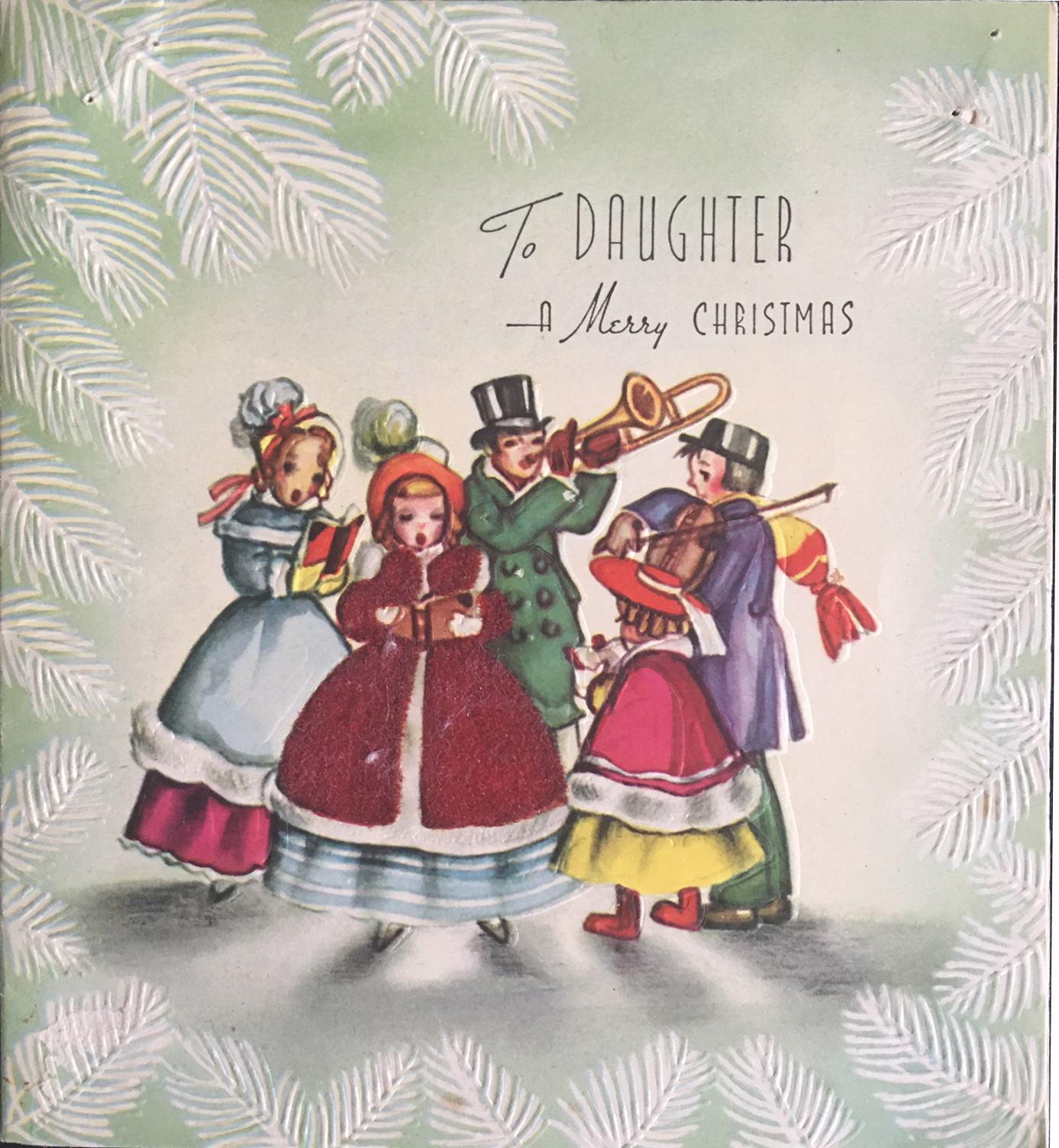 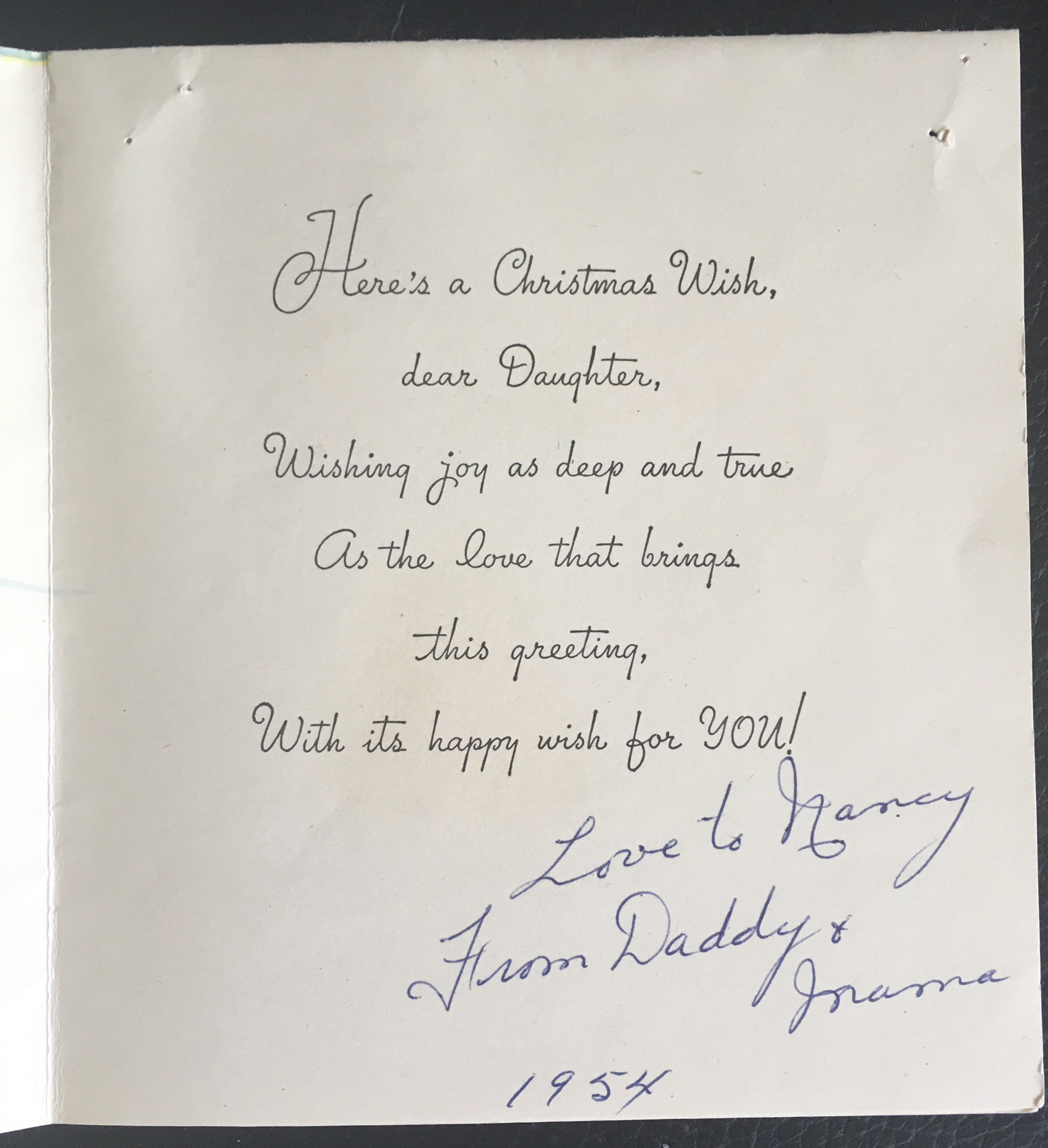 In any case, it became one of my most prizes possessions. I have no idea how many times I've read it, but let's just say I lost count years ago.

Yes, it's pretty well falling apart, but I still love that cover and the pictures inside.

And in case you're wondering, I completely identified with Jo. 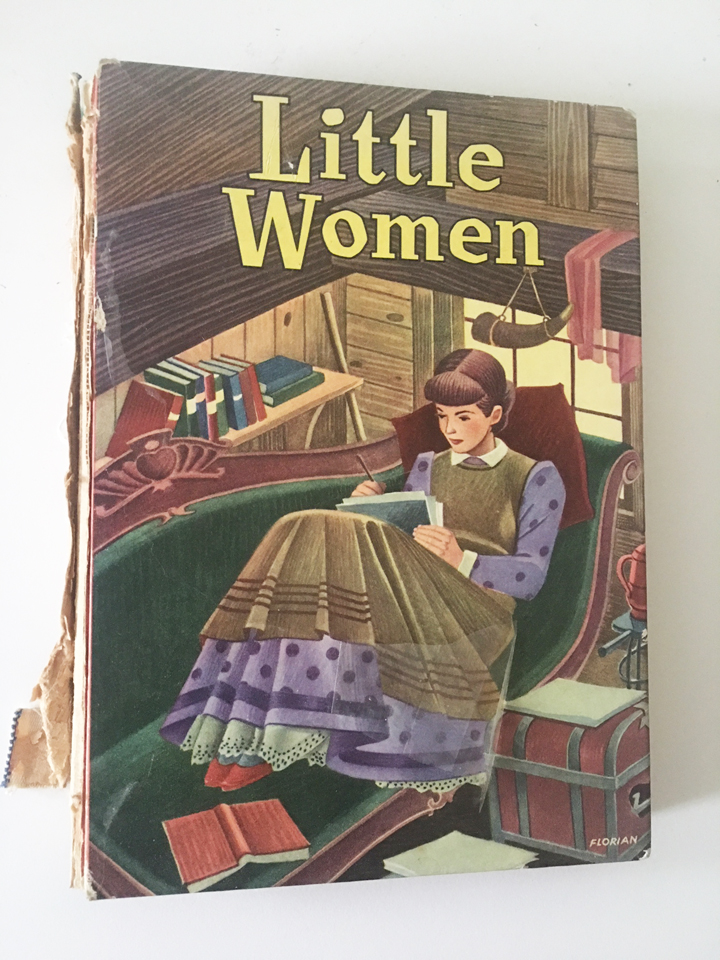 Do you remember your first day at school, and how you felt? Or mementos  from those days?

LoveChild 34: What I Knew When I Was Six