LoveChild 3: I Meet My New Parents

“Other things may change us, but we start and end with family.”

On the stairway leading to our second floor, I have two photos of each of my four sons. The smaller pictures were taken at the hospital the day each one was born. Below each birth picture is the corresponding high school graduation picture.

I have my own high school graduation picture; but there’s no corresponding newborn baby photo.

Of course, it's a lot easier to take pictures today than it was when I was born.

My sons, at birth and high school graduation.

In the earliest black and white pictures my parents had of me, I’m almost three months old.

That’s because, to all intent and purpose, my life began, not early in the early morning hours of Sunday, January 4th, 1948, when I was born, but in late March, on the day a childless couple in their late thirties took me from the arms of a social worker in the city of Regina, Saskatchewan, and drove 40 miles east along the Trans-Canada highway to the small house they were renting in the small town of Indian Head.

At the age of two months and three weeks old, I was transported by the Department of Social Welfare for the Province of Saskatchewan out of one world into a completely different one.

This, as far as I know, is the earliest picture of me. It's kind of blurry and therefore hard to make out my face, but I think I look content. Definitely not upset.

Named after her father’s only sister, Olive Margaret, Mom chose to use her middle name. A couple of her brothers and some of her friends shortened it to Maggie, but Dad always called her Margaret.

Mom was five foot two, one hundred and ten pounds, and had brown eyes and dark brown, very fine, hair that had to have frequent perms to give it some body.

She was known for wearing the latest clothes, make-up, and hair styles in spite of her small budget. When outside the house, she always wore high heels.

Mom and me. Not quite 3 months.

While his mother and several of his siblings always called him Robert, to everyone else, he was simply Bob.

Bob was six feet tall, with dark brown hair. He had small feet for such a tall man, wearing only size eight shoes, and he was always fairly thin, so in spite of his height, he wasn’t an overly imposing figure.

He was 26 years old when he married, and 36 when I came into his life. Margaret was 11 months older Bob.

They had hoped to start a family shortly after their marriage, but it didn’t happen, and when Margaret had to have a hysterectomy in her early thirties, they were devastated.

After much thought, they applied to adopt a baby girl. When I arrived, just before their tenth wedding anniversary, they were thrilled.

Judging from the way I'm smiling in this picture, I was thrilled, too.

I have no idea where “Nancy” came from, except my mother chose it. Mom told me years later that my dad wanted to call me “Deidre.” Nothing against any Deidres out there, but while I’ve never been crazy about Nancy, I have trouble pronouncing “Deidre” and I’m so glad Mom won that one. My second name, “Jane,” was for my dad’s mother, whose given name was Mary Jane. 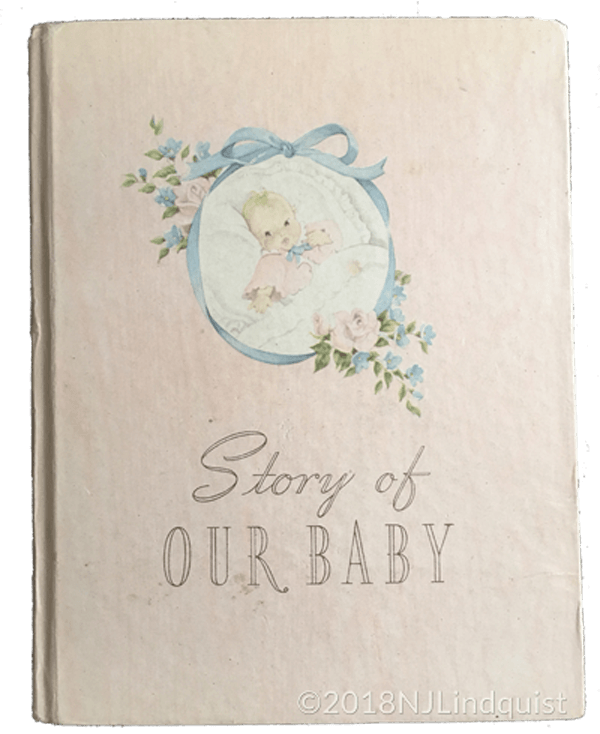 According to the small “Baby Book,” a gift from friends of my parents, I weighed seven pounds, four ounces when I was born. I had fair hair and dark blue eyes (which soon turned hazel).

I assume I was a healthy baby because when Bob and Margaret took me home to Indian Head, at two months and three weeks old, I weighed 10 pounds, eight ounces.

The baby book also has a long list of gifts we received from Mom and Dad’s family and friends: diapers (cloth in those days); several dresses (white, pale pink, or pale blue); a pink plastic cup, plate, and bowl set (I still have the plate); a silver cup; a hot water bottle with pink bunnies etched onto it; an electric bottle heater; crib blankets; two knitted sweaters; a brush; a dollar; a piggy bank; a jacket; and assorted booties, mitts, bonnets, bibs, etc.

There were also several “soakers,” which apparently were wool covers for diapers invented in the 1940s to keep the moisture in. There was also one “plastic” diaper, which I assume was a plastic outer-lining.

If, like me, you’re surprised by the hot water bottle, I discovered several similar ones on eBay, and my memory kicked it. Ah, yes. Mom put it in my bed to warm the sheets on cold winter nights before I got in. Mom also gave it to me whenever I had a stomach ache. There was one more use, but I’ll wait to talk about that.

Do you have pictures from when you were born? If so, what do they say to you?

Do you have pictures of you with your parents or other caregivers when they were young, or other mementos like my baby book? What can you learn from them?