"Rincewind tried to scream through gritted teeth. His ankles were already beginning to sweat. 'I'm not going to ride on a magic carpet!' he hissed. 'I'm afraid of grounds!'
'You mean heights,' said Conina. 'And stop being silly.'
'I know what I mean! It's the grounds that kill you!'”

Up to the fall of my third year, as far as I can recall, the only fear I'd felt was that my mother would be angry with me and either spank me or wait until my dad got home from work to tell him what I'd done so he would spank me. I was a little afraid of Mom, but, aside from the one time I mentioned earlier, not to the point of being fearful of her. And while I wasn't really afraid of my dad, I didn't want him to spank me, so her warning worked fairly well.

However, something happened the summer I was three that really scared me. 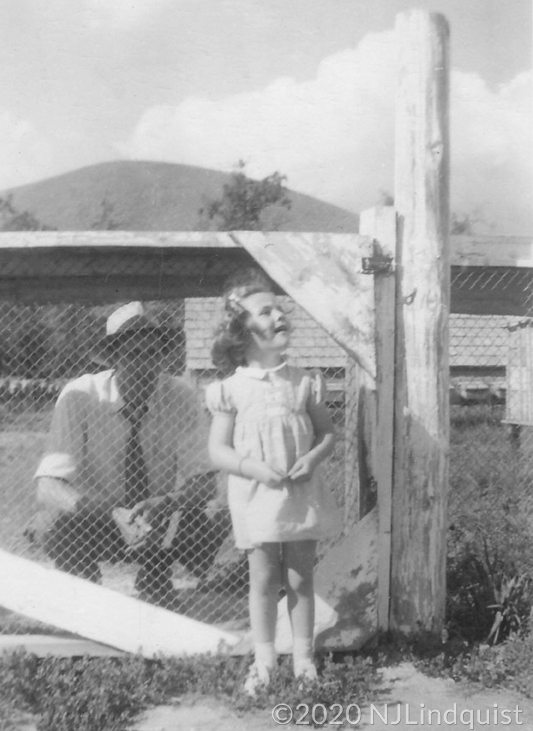 At Fort Qu'Appelle with Dad - Mom took the picture.

As I've mentioned before, my parents still kept in touch with their many friends from Indian Head, and one weekend during the early fall, we went to a cottage owned by two of those friends, at Lake Katepwa, in the Qu’Appelle Valley, just north of Indian Head.

This picture was taken at Fort Qu'Appelle when I was three and a half. No idea what I was looking at or why Dad was watching me from behind the gate.

My guess is that we were staying at their friends' cottage for the weekend, and that we had a bedroom there.

I remember the place as being rather dark, with bedrooms at the back, and then the kitchen, and then a large living room and a patio or porch of sort.

But I don't really remember any parts of the weekend except what happened on Saturday evening.

There was a party going on and people kept arriving—mostly adults. At least, I don’t remember any other children being there—certainly no one my age.

I assume many of the people at the party had cottages at the lake and had just come over for the party, although some of them might have been planning to drive home to Indian Head or other nearby places. 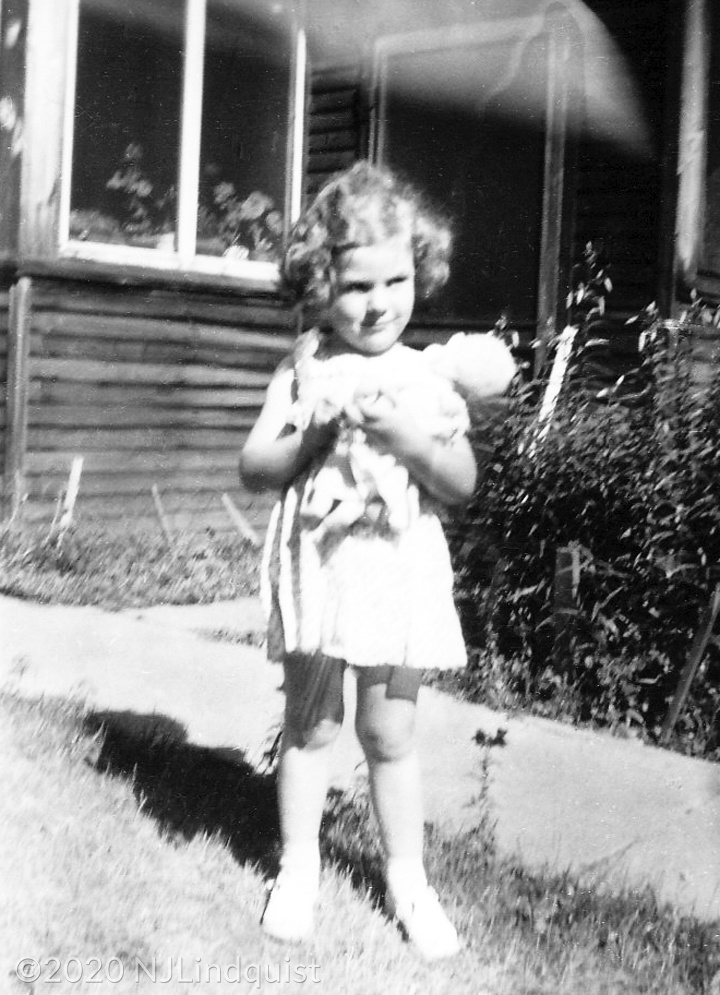 Pretty sure this is the cottage we were visiting, and this might well have been the weekend.

I remember that people were milling around, holding glasses, and talking in small groups both inside and outside the cottage. To my ears, it was quite loud.

At one point, I somehow got separated from my parents. If, as I assume, we were staying at the cottage, I might have gone back to our bedroom for something, or I might have already been put to bed but either woke up or couldn't sleep and wanted to know what was going on.

Anyway, I came out of the room and found myself in the midst of a crowd of adults. I didn't see either of my parents and couldn't see much because of the number of large people everywhere.

Suddenly, a very tall man with a rather loud voice and a hearty laugh—someone who I vaguely knew but whose name I don’t recall—saw me and asked what I was doing. I told him I was looking for my dad and before I could do anything, he'd picked me up and set me on his shoulders with my legs dangling down in front. If my dad had ever done that before, I don't recall. I think my mother would have objected.

I’m sure the man felt I was secure, and that I’d enjoy being up there where I could see better, but I was speechless with fright. I didn’t want to touch him, but the ground was so far away that I had to put my arms around his neck to make sure I didn't fall.

I remember his moving from the kitchen into the other larger room where more people were gathered, and I was terrified I was either going to hit my head on the doorway between the rooms or fall backward, or else just lose my balance and fall.

He was drinking something dark from a glass, and he was laughing and talking loudly to everyone. From observing the people when my parents had a party, I was already aware that adults seemed to get very loud and silly when they were together and drinking dark liquid in glasses, so I was also worried that he might do something silly and accidentally drop me.

They talk about fright or flight responses. I clearly had a fright response. I couldn't speak or move. I just held my breath and tried not to look down. I felt completely helpless, and I could only wait for this moment to be over.

I felt marooned up on his shoulders for ages, but I expect it was only a couple of minutes before someone noticed that I looked scared, and suggested to the man that he should probably set me down. He did, and I think someone pointed to where my parents were and I ran to them.

Looking back, I wonder why I didn’t scream or yell for my parents. I think it’s because I knew the man wasn’t intending any harm—in fact, I’m sure he thought he was giving me a treat—so I didn’t want to embarrass him. Plus, I was afraid my parents would be annoyed with me if I made a big deal out of nothing.

Also, I likely didn’t want people to think I was a scaredy-cat, even though I knew I was.

The fear of falling has stayed with me. Who knows, maybe I was dropped at some point earlier and learned the fear of falling then. All I know for sure is that I've never ever wanted to go on Ferris wheels or other rides that go high up. I've never gone into the CN Tower even though we've lived near it for more than 30 years. And I'm very cautious about going to the edge of buildings or cliffs.

And, no, I didn't let my husband put our boys on his shoulders unless they were begging him to pick them up. And I made him hold their legs.

Speaking of fear, I have one picture that puzzles me. It's of me going out for the first time on Hallowe'en.

Mom wrote on the back that I was 2 years, 9 months old, and that it was taken in Indian Head.

As you can see, this was shortly before my first haircut.

I assume that my parents had driven back to Indian Head for the evening to take me to specific houses, no doubt because they still had more friends there than in Wolseley. Or maybe we did both. The drive was only about twenty minutes.

What strikes me is that Mom dressed me up as a witch. I expect it was that or a ghost, since both costumes were pretty easy to make. 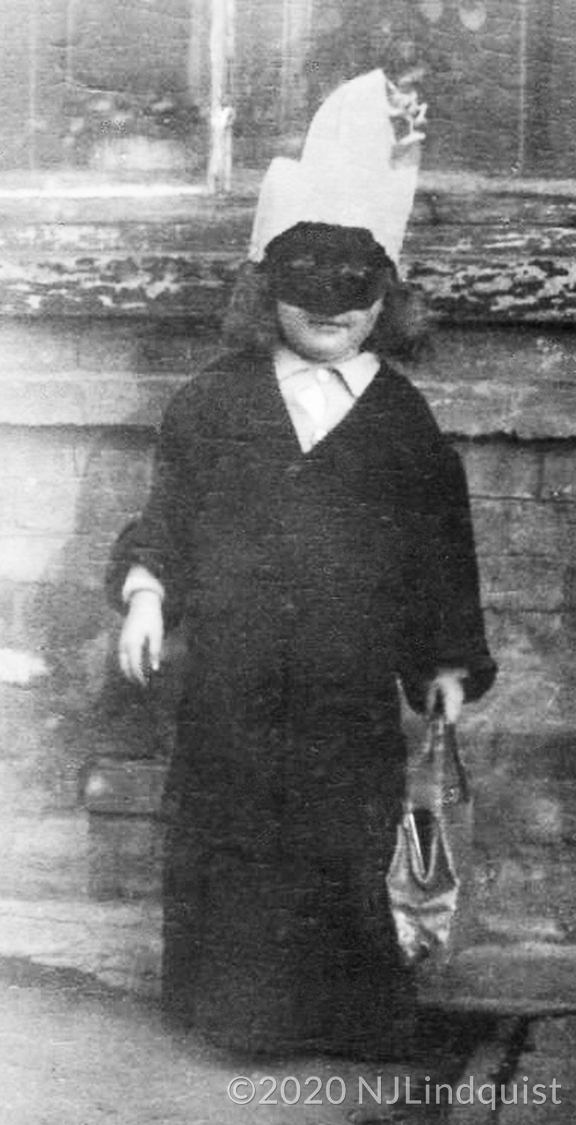 As you can see, I'm holding an old purse to put the candy in. Back then, you made do.

My question is, did I have any idea what a witch was? Was I afraid of being a witch? I'm not smiling. Did I enjoy my first Hallowe'en or not? I'm quite sure I enjoyed any candy I was given.

But, seriously, what do two and three-year-olds think about at Hallowe'en? I doubt if it's witches.

When I was 3, I paid my first visit to the dentist. I had two cavities, which, unfortunately, were the first of many to come. (Note to parents: don’t let little kids eat raisins and dates and raisin bread without brushing their teeth!)

I didn't much like going to the dentist, but I don't think it was too scary. Not that time, anyway. (I feel sorry for all the dentists who have to live with people being afraid to visit them!)

How do you feel about heights? Did you/do you go on Ferris wheels or other rides that are high in the air? Climb mountains? Go bungee-jumping? If so, how do you think you're able to go high without fear? Or do you do it in spite of the fear?