“My life has been shaped by the decision two people made over 24 years ago. They decided to adopt a child. They got me, and I got a chance at the kind of life all children deserve.”

The wait was almost over

As I mentioned last week, I’m sure waiting for my adoption to be finalized produced a lot of anxiety, especially for my mother. Of course, I was unaware of this at the time. But from what I learned later about Mom, I'm certain she‘d have done everything in her power to make sure the social worker who visited never found a reason to complain. Our home would have been as tidy as Mom could make it. She would be the perfect mother. I would be the model child.

However, based on my knowledge of her over the years, Mom would have been worrying all the time that something would occur to make them take me away in spite of all her efforts.

Meanwhile, Dad worked long hours in the butcher shop to make sure he had enough money to look after Mom and me. I’m sure that he, too, was anxious, although he would never admit it. Instead, he’d have told Mom she had no reason to worry.

The legal system does its thing

On the 10th of February, less than a year after I had been given to my parents, they were asked to fill out the official Application for Adoption.

Some weeks after that, a social worker named Miss A. L. Peach made her last visit to see how we were doing, and then filled out her final report, recommending that the adoption proceed.

In a letter from the Department of Social Welfare for the Province of Saskatchewan dated April 20, 1949, the Director of the Child Welfare Branch, Miss A. H. Dales, noted the positive report from Miss Peach and said that as far as they were concerned, Nancy’s legal adoption could be completed and they were very pleased to note what excellent progress she has made, and that she is a happy, well-adjusted little girl.

After that, my parents just had a few forms to fill out and have notarized, and then a short wait for the official papers. 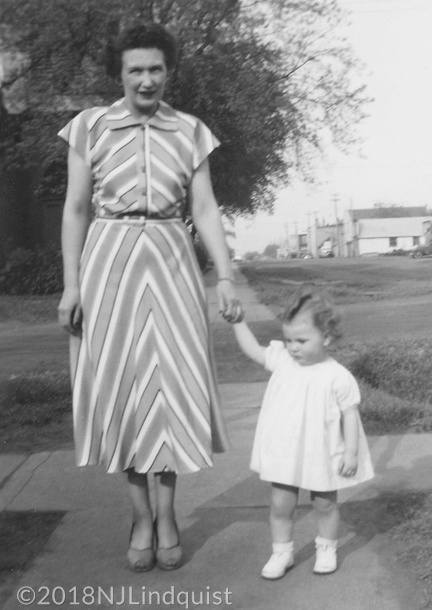 On May 22, 1949, at the age of one year and four and a half months, I was baptized at St. Andrews United Church in Indian Head, where my parents had been members since April 6th of 1941.

Mom and Dad had waited until they were certain the adoption would go through before committing to the baptism.

This picture of my mother and me was likely taken that Sunday. I'm the right age, and it could have been this warm at the end of May.

By the way, in most of the pictures of Mom and me, she's holding my hand. Possibly because that's the only way she could ensure that my white dress, white socks, white shoes, and the rest of me stayed clean. 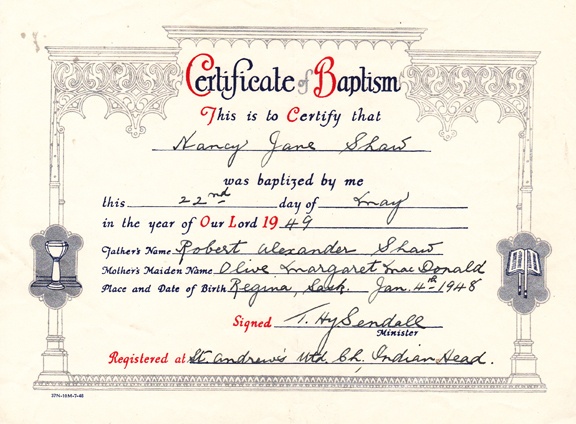 Mom kept my certificate of baptism.

The next stage of my life begins

A couple of weeks after my baptism, on June 3, 1949, my adoption became official.

In a letter from the Department of Social Services for the Province of Saskatchewan, Miss A. H. Dales, Supervisor of Adoptions, wrote:

The Adoption Order has now been granted in connection with the above mentioned little girl. And we are enclosing herewith the original copy of same for your future reference.

The Adoption Order herein cancels entirely our guardianship over this little girl, and she is now as your own natural child.

With our very best wishes.... 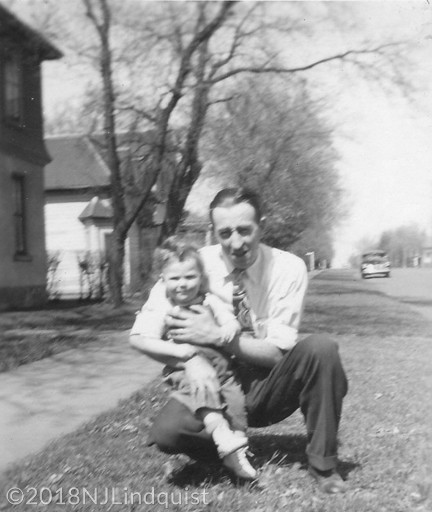 Me with my dad - I was now legally his daughter

My parents sent $1.00 to get my revised birth certificate, which said I (Nancy Jane Shaw) was born on January 4th, 1948. The three of us were a forever family. I can only imagine the relief my parents felt at that point.

And so the nine months I’d spent in another woman’s stomach and the nearly three months I’d spent in Regina under the care of the Department of Social Services receded into the back of everyone’s minds. After all, the philosophy of the time was that children were a blank slate, so there was no reason for any concern that my past might affect me.

The word “adopted” was rarely, if ever, used by my parents; certainly not in my presence.

The words "she is now as your own natural child" in the Adoption Order reminded me that over the years, I’ve often heard friends and family (not usually the parents themselves) refer to a child as “their adopted” son/daughter. And while it's true in the sense that the child was adopted as opposed to having been naturally born to the parents, it is usually neither necessary nor kind. The whole process of adoption means that you are no longer who you were; you have a new identity, and it is your legal (real) identity.

Continuing to use the word “adopted” to refer to a child who has been legally adopted strikes me as devaluing not only the child but the entire process of adoption. When a child is adopted, that child legally becomes his or her parents’ natural child, entitled to anything and everything due a natural child. No asterisks or explanations needed.

Some "forever families" begin when the child is conceived; others begin at a later date. And some children never really feel part of a family that wants them, which is very sad. When you think back on your story, how do you feel? Were you wanted? Chosen? An "accident?" A gift? A burden?

How has your parents' response to your birth affected you?

Conversely, if you have children, do they know their stories of becoming part of your family, and how you feel about them? (Even accidents and burdens can turn out to be amazing gifts!)