LoveChild 6: My First Year Is a Happy One

"A baby is a little bit of heaven on earth.”

Me at six/seven months 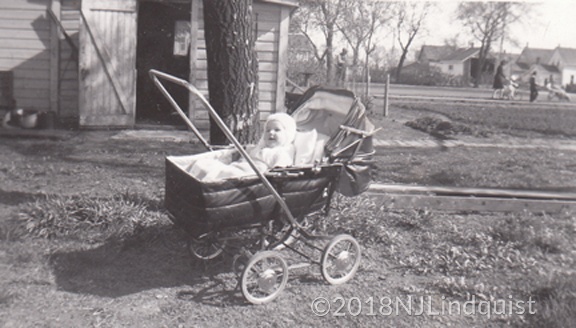 As you can see, I'm bundled up in my carriage with a sweater, hat, and blanket because I might get cold. It's either June or July.

Mom is in a short sleeved dress and I'm wearing a warm coat and hat. It's August or September.

Many years later, Mom told me that the reason I'm cold most of the time is probably because she was so intent on not letting me get chilled when I was a baby that she may have overdone it.

My internal thermostat was warped early on. That's my excuse and I have proof. 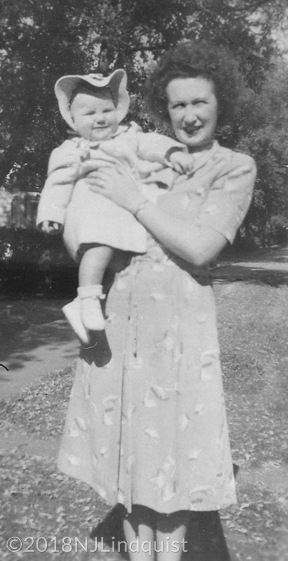 Me at ten months

As you can see from my healthy appearance and excited face, I was a happy baby. I raced through all the milestones at top speed—at least according to Dr. Spock’s book, The Common Book of Baby and Child Care, which had come out in 1946, and which Mom used as her reference book.

According to Mom's notes, I was not only walking at 10 months, but climbing on chairs (as in this picture) and beginning to run.

Plus I already had eight teeth.

I also had quite a few words in my vocabulary, although not all of them were clear: "Bob" or "daddy," "Na na" for Nancy, "Ma" for Mom, "doddy" for dolly, "tatters" for potatoes, "Bobo" for Bozo, "mew mew" for Fluffy, "aisins" for raisins, "awa" for water, etc.

Me at one year

In this picture, I'm sitting on a table in our living room. Again, my body language is that of an excited, content baby. As for my wild-looking hairdo—more about that later.

The photo on the wall in the background is of my parents, taken when they were newlyweds. I still have it.

I also still have the table I was sitting on. It’s had many uses over the years. Right now it’s in our bedroom, holding my stacks of to-be-read books. 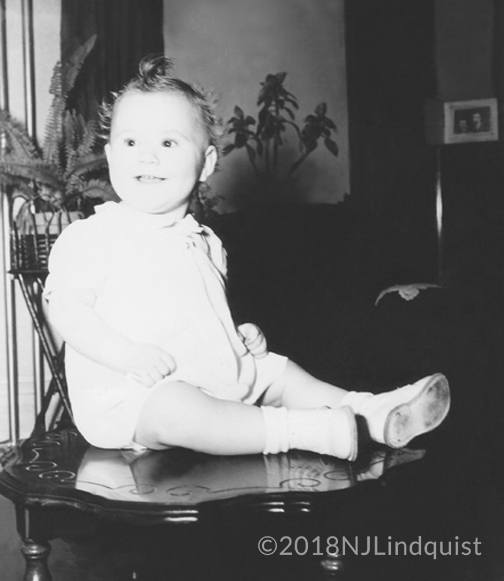 According to Mom's notes in my Baby Book, for my birthday, one grandmother sent me a card and a hankie, and the other sent me a card. Mom and Dad gave me a gold bracelet (a thin golden band that fit into itself, but had a short chain to keep it from falling off). I have no idea how often I wore it.

Giftwise, I’d done better at Christmas, which always falls 10 days before my birthday. (No, that isn't a particularly great thing.) Various relatives and a few family friends sent me new dresses, a pink housecoat, a snow suit, two scarves, a plastic bib, wool stockings, a doll, a drum, and a ball. Mom and Dad gave me a sweater, a doll, and a pull toy.

The toy situation back then

In case you’re wondering, Fisher Price and most of the other large toy makers didn’t exist in those days. Nope, no Lego either. Not even Matchbox cars. And there were no toy stores either, at least not where we lived.

In fact, I'd be willing to bet that many children today have more toys by the time they're two than I had in my entire life.

Indian Head, like most small towns back then (and many today), had a lot of businesses connected with farming, plus a grocery store, drug store, a hardware store, and a general store, sort of like today’s “dollar” stores, and a dry goods store, that had clothes, shoes, bedding, towels, etc. Most of these stores were quite small, and choices were few. A few of the stores would carry a small selection of toys, but the toy section might be one small shelf, which would be expanded a bit for Christmas.

Many people ordered what they needed from the Eaton’s or Simpson's catalogues. Not that my parents had much money for things that weren't necessary.

But I had a good imagination, so I made do with what I had, even if it was only a pot and a spoon.

I appear to have been perfectly happy with my life, but my parents were actually feeling some stress during my first year. Even though my birth certificate had my new name on it, the adoption process hadn't been finalized. A social worker was still making home visits, and the final decision about whether I would remain with my new parents had yet to be made.

I honestly can't imagine what it would be like to look after a baby for a year as if it were your own, and then be told you couldn't keep her after all.

As I turned one, Mom and Dad anxiously counted the days until the final decision would be made.

Did you have a lot of toys when you were younger? Or did you have to make your own fun?

What items or pictures do you have from your first year, and what can you learn from them?