"There may be no secrets in small towns, but there are no strangers either."

My new parents lived in Indian Head, a pretty prairie town about 40 minutes east of Regina, Saskatchewan. Surrounded by flat wheat fields, the town was visible from a distance because of a dozen tall, white elevators filled with grain and waiting for the railway cars that travelled the all-important track that came from Brandon, Manitoba and went westward through Alberta.

Indian Head's main street was a wide road with mostly wood, but a few brick, one and two-story business on both sides. Clusters of wood homes went back a few streets and held the roughly 1500 residents.

I know everyone sees the pictures of treeless prairies, and thinks that's it, but Indian Head (click to see pictures) has always had both trees and flower gardens.

Plus, it's only an short drive north to the Qu’Appelle Valley, where the prairies drop off into the valley of the lovely Lake Katepwa recreational area. My parents had friends with cottages on Lake Katepwa. 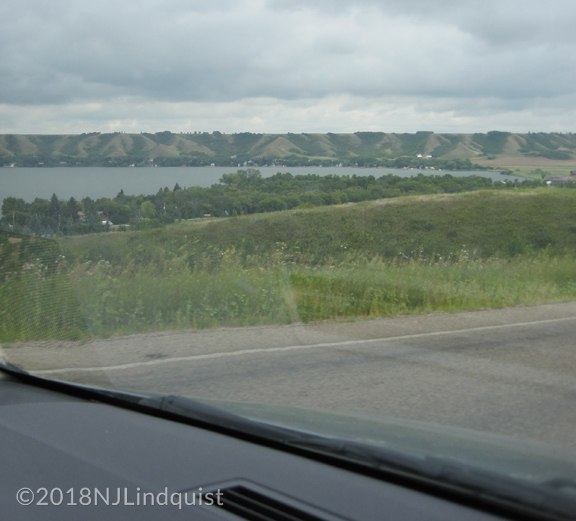 Lake Katepwa on the left. 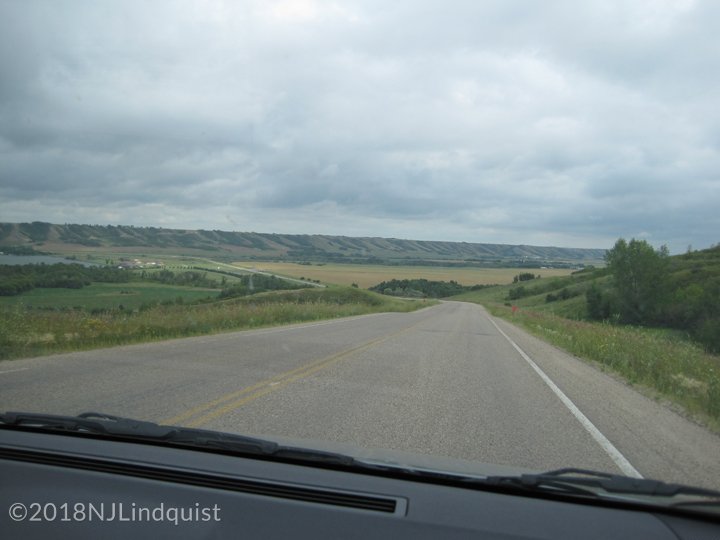 Going down into the Qu'Appelle Valley.

My memories of Indian Head, which includes occasional visits in later years, is of a small but pretty place, with kind people, most of whom were connected in some way to the farming community.

My parents weren't from this area, but had moved to Indian Head for my dad to take a job in a butcher shop at least seven years earlier. They became members of St. Andrews United Church on April 6, 1941. By the time I arrived, Dad had a small butcher shop and Mom was a homemaker.

During their time in Indian Head, they had made quite a few friends, some of whom remained close long after we'd moved away. In fact, several of them came to my wedding, and I still have their presents.

I know my parents rented a small house while I was a baby, but I have no pictures of it, except in the background.

For example, the picture of my dad holding me, which I cropped for my previous post in order to focus on the people, actually shows the back of our house and some of the back yard (as well as Mom's shadow as she was taking the picture).

The other picture, of me, shows a bit more of both the house and yard. And the bottom picture shows Mom with me at the side of the house. (Looks like the same ladder, right?) 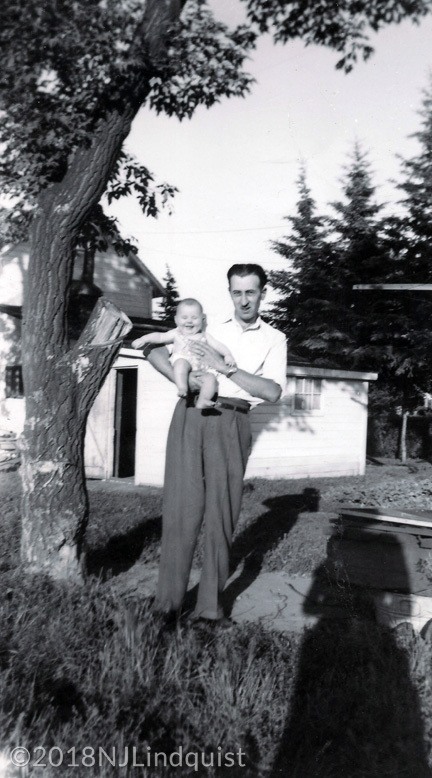 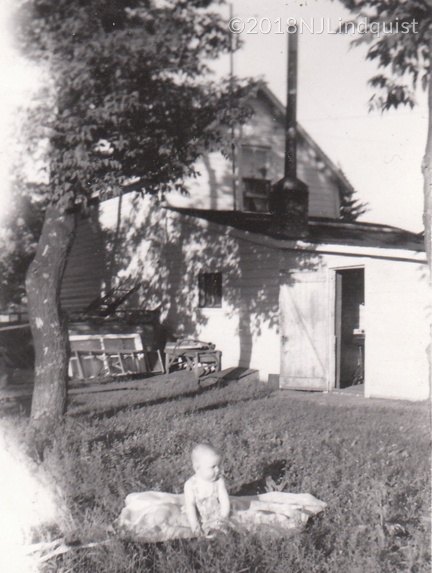 Pretty sure this was our house. 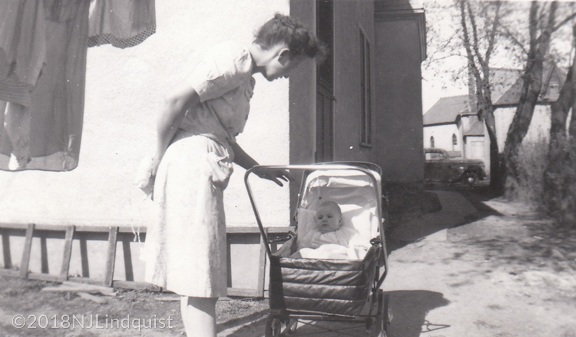 Looks like the same house, with Mom and me.

The main reason I'm not positive the pictures above are of our house is that I also have pictures of the front of a house which I'm pretty sure was Mom and Dad's. It might, however, have been one they lived in earlier. One thing I do know for sure is that there was a porch with steps at the front of our house, and the house in this picture has one.

And yes, that's a German shepherd on the porch. Mom and Dad got him shortly after they were married, so when I came along, he was already nearly ten years old. I'll tell you more about him next time. 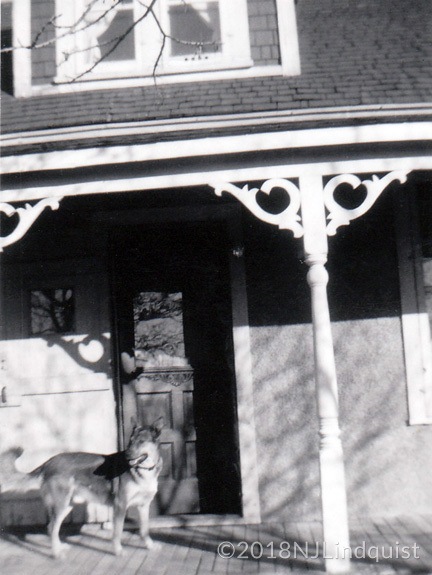 As you can see by this picture, taken when I was around five months old, as well as the earlier ones, I look like a contented, well-fed baby—which is kind of amazing.

According to Mom, who told me about it numerous times, I had major problems keeping down my food for the first few months after they got me, and did a lot of projectile vomiting. This was, of course, a big concern for my inexperienced parents.

They tried various things their friends who had children recommended, and took me to doctors in Indian Head and Regina, but nothing seemed help.

The problem was finally solved by a doctor who suggested giving me buttermilk instead of the formula that was popular then (likely made with either regular milk or evaporated milk, plus corn syrup).

Buttermilk was the liquid left behind after the local creamery churned butter out of cream. The buttermilk came in a glass bottle from a small local creamery, I remember the glass bottles and even the ice box (from before we had an electric refrigerator), which was kept cold with a block of ice that was inserted into a small compartment in the vertical chest. I know what you’re thinking—I must have lived in the dark ages. Well, not quite, but close.

Ice was harvested in the winter and kept in ice houses and taken around to put in iceboxes (an early form of refrigerator). I can actually remember the ice man coming, and the tongs that were used to carry the block of ice and put it into the chest. (See the movie Frozen.)

I associate the ice with sawdust, which was used as insulation to keep the blocks of ice cold in the summer while they were taken to the houses.

Why so few pictures? 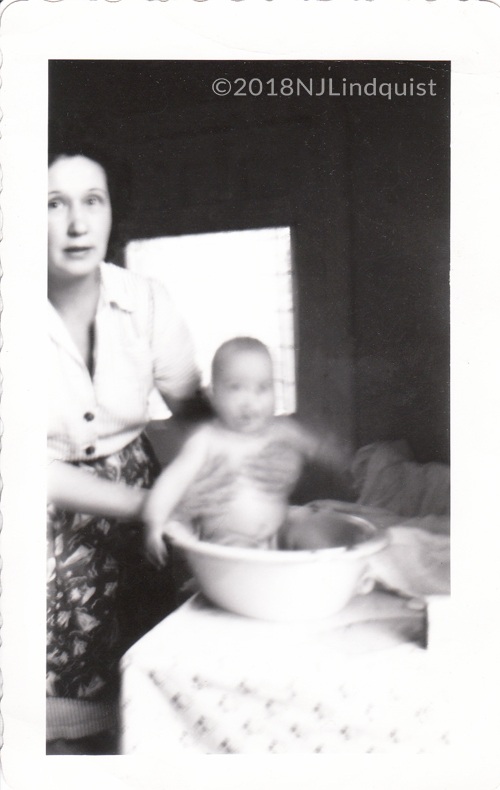 In case you’re wondering, back in those days, Mom had a small Kodak box camera (my guess is a Brownie Target Six-16) that took so-so pictures at the best of times. (Or my parents weren't the best picture-takers.)

All the pictures were black and white, and the film had to be developed when it was full, so you might not find out for weeks or months whether or not your picture had turned out. Most of the pictures I have were taken outside on sunny days.

The picture here is one of only a handful taken inside our house in Indian Head. Most of the inside pictures are too dark, but this one isn’t bad, and you can see Mom giving me a bath in a basin that barely fit me, on the kitchen table.

After the formula problem, our first year went pretty well.

The Common Book of Baby and Child Care, by Dr. Benjamin Spock, came out in 1946, so that's what Mom used to guide her. According to her written notes in the Baby Book, I easily hit the milestones Dr. Spock wrote about, and more:

*Discovered my hands at 3 months

*Tried to raise myself up at 4 months 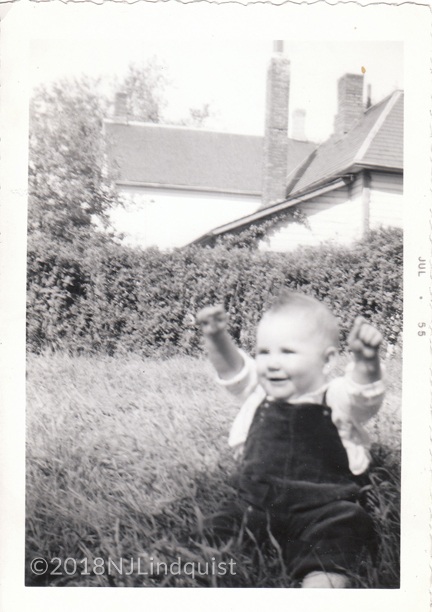 *Walked while holding onto chairs or tables a week later

I should mention here that I was mostly with Mom. She looked after me during the weekdays and on Saturday while Dad was working. I saw him a bit in the morning and at lunch and was in bed by seven, so not much in the evenings. He'd get one afternoon off during the week and then Sunday, but being a butcher meant long hours and hard work. So for most of our days, it was Mom and me. But things went on pretty well for the first year. Well, except for one other challenge, which was pretty significant. I'll tell you about it next week.

Do you have pictures or other information about your first home?

What challenges did you have as a baby? (Or maybe as a parent with a small baby?)