“Life is a journey with problems to solve, lessons to learn, but most of all, experiences to enjoy.”

Our First Summer in Crystal City

I don’t remember anything about the actual move to Crystal City - like whether we hired a truck or how we drove there… Nothing at all.

As for our new house, while I remember the outside and the yard, I don’t have many memories of the rooms in the house. The stairs to go to the second floor were on the left just inside the front door. I assume there were three bedrooms upstairs, plus a bathroom. I think we had a guest bedroom, because I'm pretty sure we had a family member or two visit once in a while.

The basement door was under the stairs and it was dark down there, but that’s where the washing machine was kept.

I think the kitchen was at the back of the house.

And I'm quite sure that the dining room table was in the room at the front of the house, because I remember reading and doing puzzles on that table, with the window nearby. Although for some reason, I remember sitting with my back to the window.

We Begin to Make Friends

When we arrived in town, we didn't know anybody. Of course, Dad got to meet people at his store, and he slowly got to know other businessmen.

We went to the Crystal City United Church almost every Sunday, and I assume we got to know some people through the church. I was part of the Baby Band, but I don't remember that at all.

The family I remember best is the one who lived kitty corner from us (behind the garage). He was a pharmacist who owned the the only drug store in town. I remember her as bubbly, outgoing, and fun to be around, and I think she and my mom, who was much quieter in general, got on quite well.

They were a bit younger than my parents, but not a lot, and they had three boys. The oldest was my age, and I believe the younger ones were twins. A fourth was born a year or two later.

Of course, their house was a lot more chaotic than ours, because of having several young boys versus one very quiet little girl. I don’t know if I envied their sons or not, but it did occur to me that life was probably a lot more interesting at their house.

We still had Bozo, of course. (See the photo in my last post.) And I believe we also had a cat named Tippy.

I know we had a cat who had kittens, and it was either in Wolseley or in Crystal City. I assume it was Fluffy and that Tippy was one of her babies. But somewhere along the line, Fluffy wasn't there are more but Tippy was.

There’s not much else I can recall from that first summer, other than what was a pretty major event for Mom’s family—her younger sister Brucie got married.

Very fuzzy picture, but that's me with Tippy on our cement slab.

I Get To Be a Flowergirl

My aunt Brucie was married on June 28th, 1952, to Sheldon Bloomer, who lived in Charleswood, then a Regional Municipality south-west of Winnipeg. The Bloomer family owned a grocery store in Charleswood, and the three Bloomer brothers later built and operated the Charleswood Hotel.

But I was more impressed by the fact that Sheldon was also a hockey player who played in the AHL and other US leagues. He was a member of the Winnipeg Maroons hockey team that won the Allan Cup in 1963/64 and is in the Manitoba Sports Hall of Fame. I still have a small change purse he brought back for me from overseas.

It was a sad wedding in some respects because it was hard for the family not to think of Brucie's dad, Bruce MacDonald, who had died when she was eleven. Brucie was named after him, and he would have so enjoyed walking her down the aisle. Instead, her Uncle Mac had that honour.

I do have a few pictures.

I was four and a half and I'm not sure I smiled at all that day. I felt like a princess in my beautiful dress and I was very intent on not making any mistakes.

By the way, Aunt Brucie's bouquet was made from gladiola with roses in the centres. I thought it was the most beautiful thing I'd ever seen, and when I was married, I had a similar bouquet. Hers was white and red; mine was yellow and red. 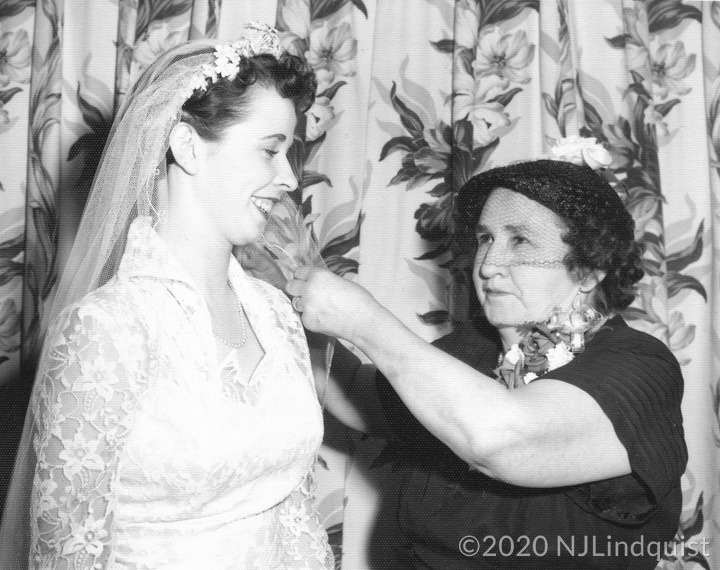 Brucie with her mother, Alice MacDonald. 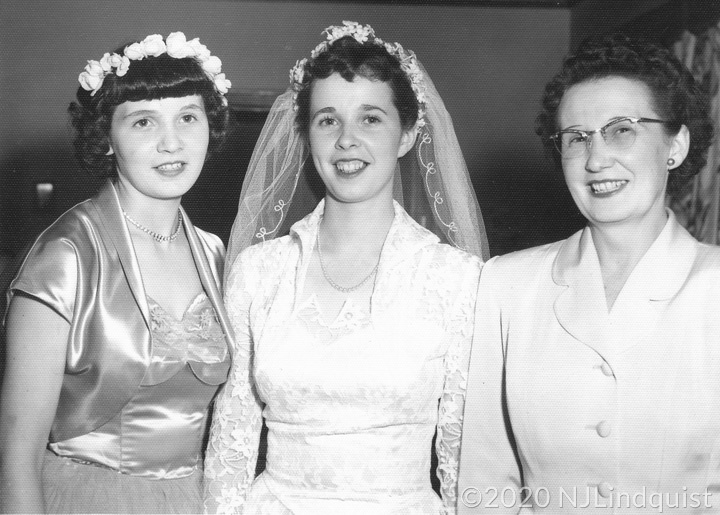 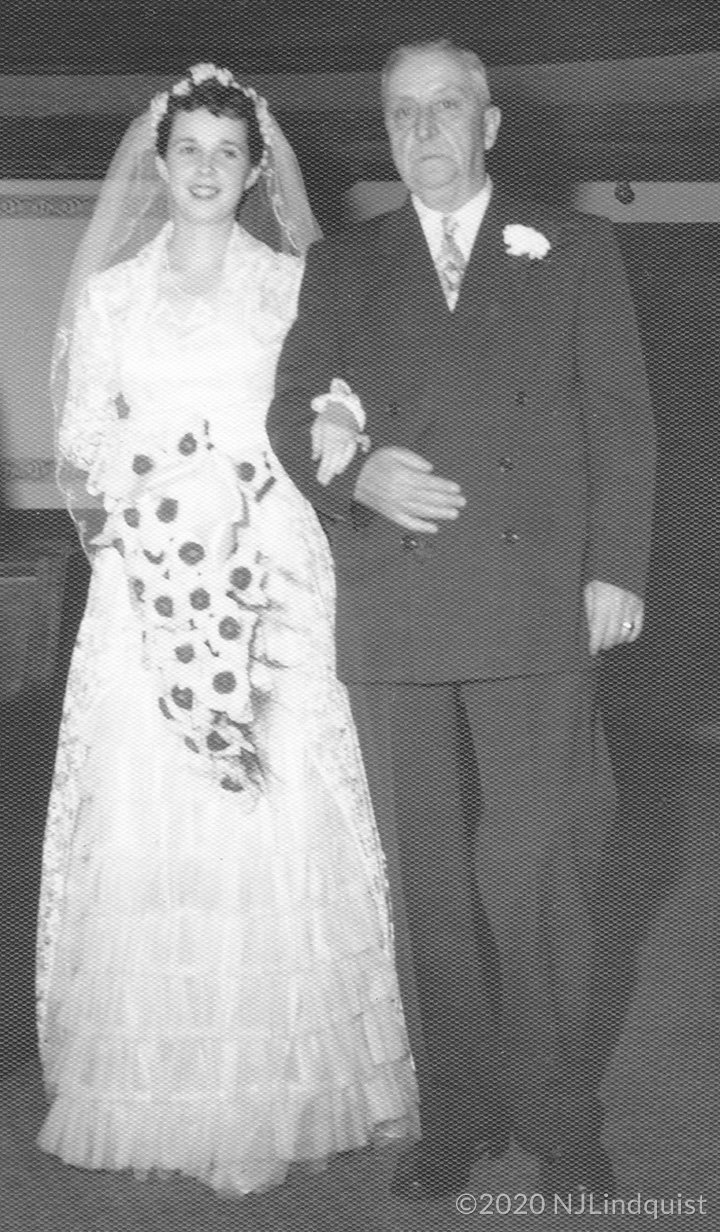 Brucie being walked down the aisle by her uncle, Mac McTaggart. 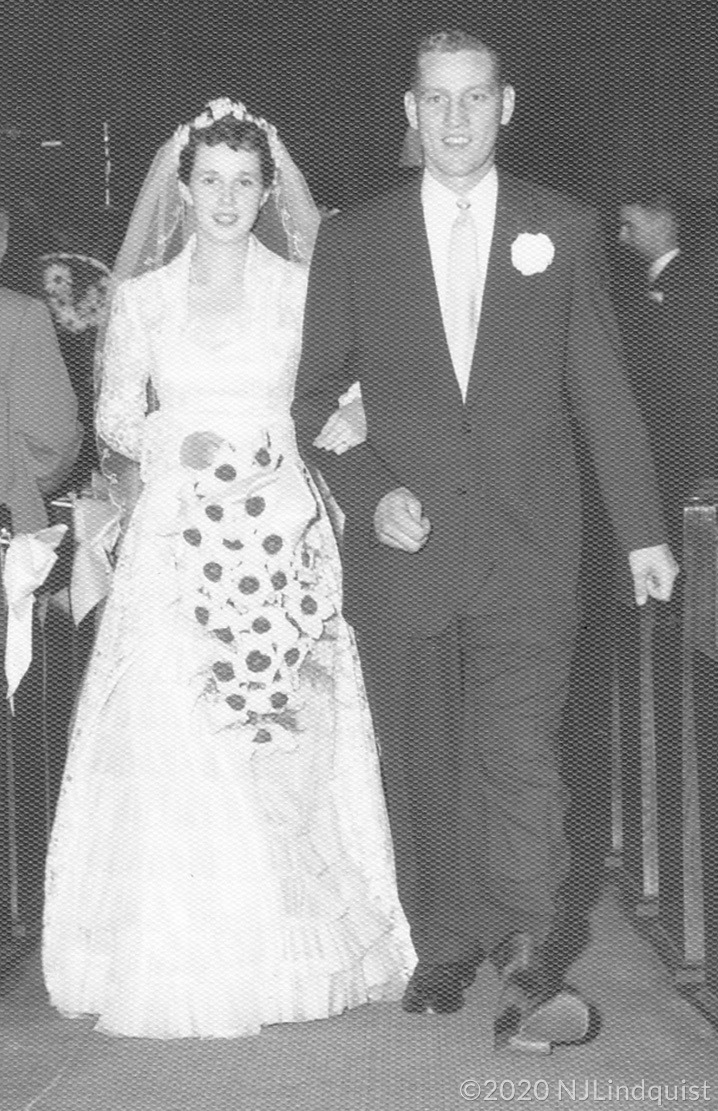 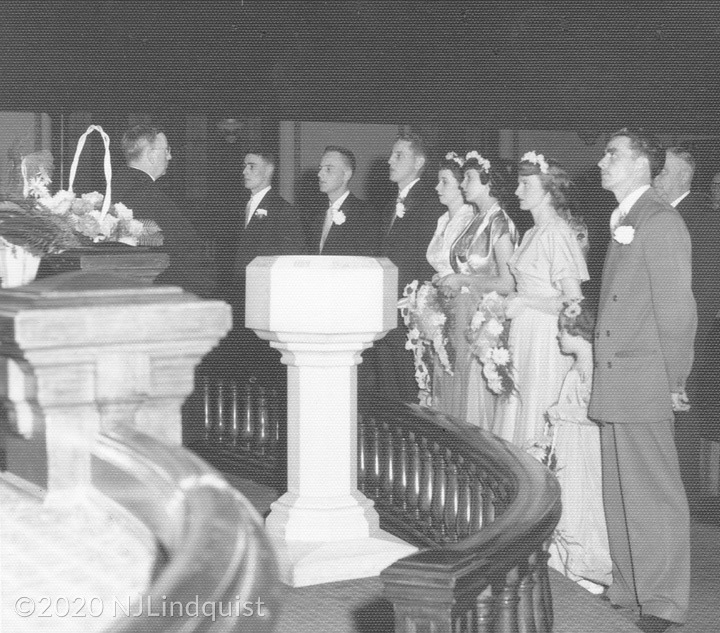 The wedding itself. The little girl watching intently is me. I'm pretty sure that's Mom's brother, Uncle Mervin, beside me. Which is sort of puzzling. 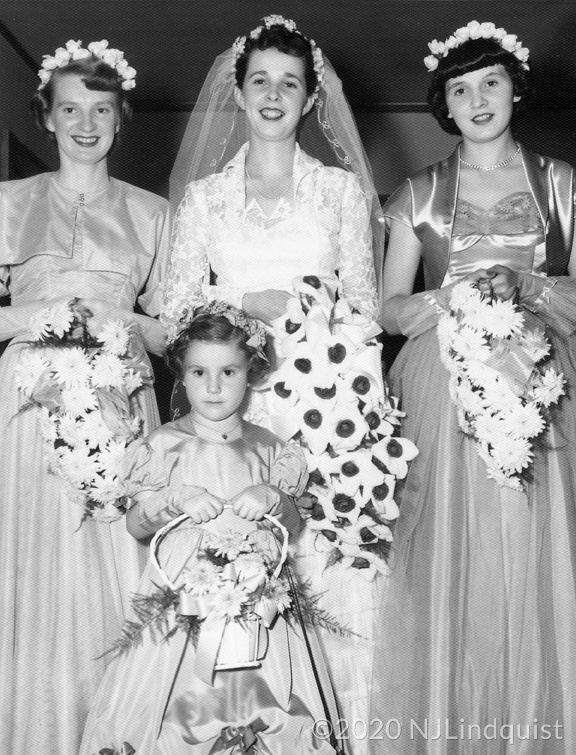 Brucie with her bridesmaids - a friend and her sister Fay. And me.

Two Last Memories of the Summer

In Saskatchewan, we'd been able to spend some days at Lake Katepwa. But it turned out that Crystal City had a lake, too—Rock Lake. It's less than half an hour from the town, and it has a beach and boating, etc. So we were able to make some day trips there for a picnic.

The last thing I remember (only because Mom told me) from that summer was that the school wanted to know if they wanted me to start grade 1. No, there was no kindergarten in those days.

Apparently, there weren't a lot of kids who were the right age, so they were looking for a few more. Mom and Dad decided that they didn't want me to attend.

The weird thing is that the next year, when I was 5 1/2, there were too many kids. So, because my birthday was January 4th, I had to wait until I was 6 1/2 to start school.

There are scenes that are sort of like short video clips that live in my head. Some of them I can sort of anchor to a specific time or place because of pictures I have of things someone has told me, but others just kind of float in my memory without many details.

Do you have a lot of memories from when you were four? 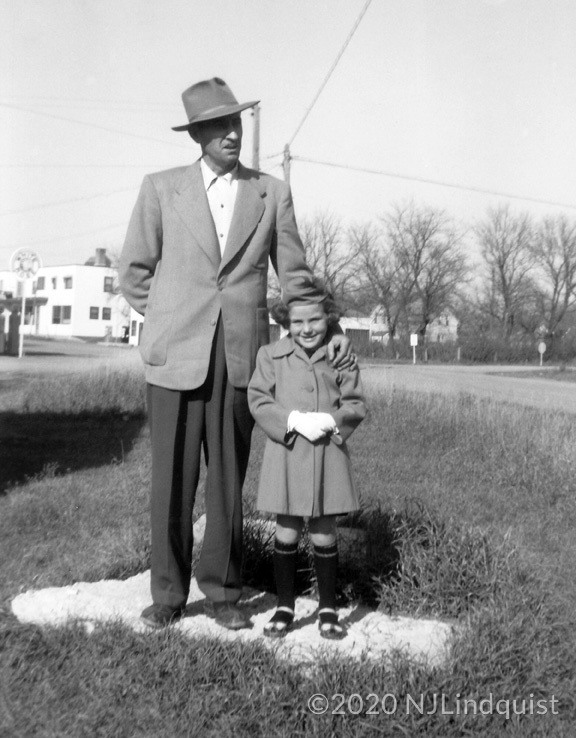