LoveChild 29: As I Turn Four, My Parents Become Restless

“Your time is limited, don’t waste it living someone else’s life. Don’t be trapped by dogma, which is living the result of other people’s thinking. Don’t let the noise of other’s opinion drowned your own inner voice. And most important, have the courage to follow your heart and intuition, they somehow already know what you truly want to become. Everything else is secondary.”

For my fourth birthday, in January of 1952, I had a party with the three boys I played with on a regular basis: Scott, Greg, and Donnie. Mom wrote in my Baby Book that we had cake, cookies, drinks, paper hats, and balloons. I have no picture of the party, which was of course indoors, but I do have one from the spring of that year.

My gifts included a 14-carat gold ring from my parents, a book from Granny Shaw, a hankie from Aunt Margaret and Uncle Albert, writing paper from Scott and Greg, some money from Donnie, and cards from Granny MacDonald and Aunt Ettie and Uncle Bert.

I really hope I got a few new toys for Christmas. I suspect I got a new toy phone.  And probably another doll. 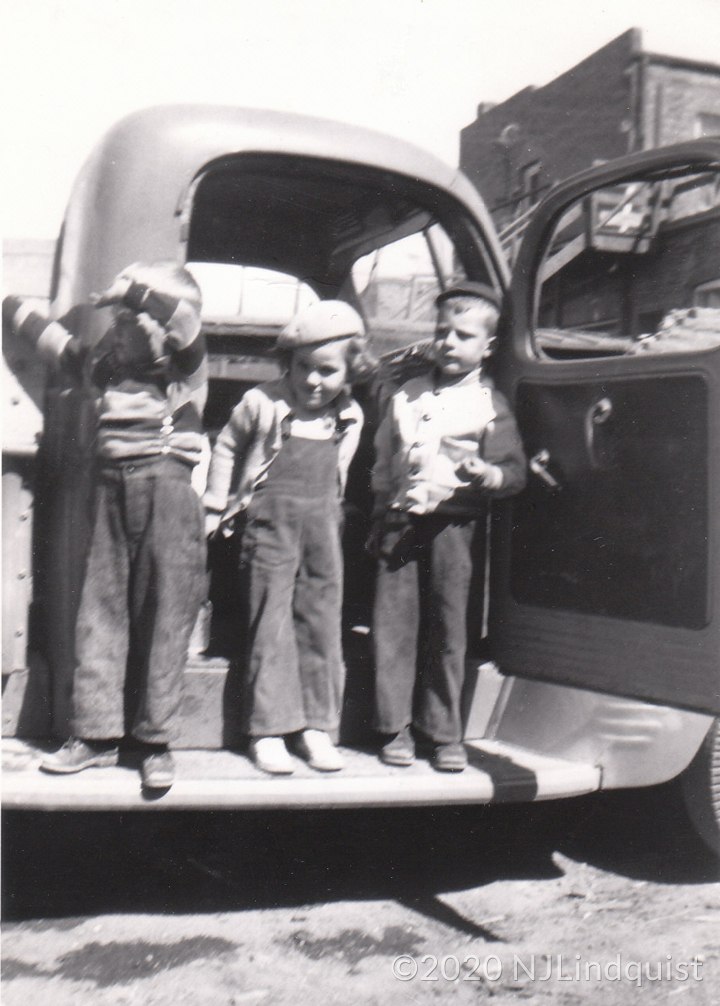 Me with two of the boys I played with. No idea whose truck we were playing in, but you can see why Mom wasn't thrilled with our backyard playground. 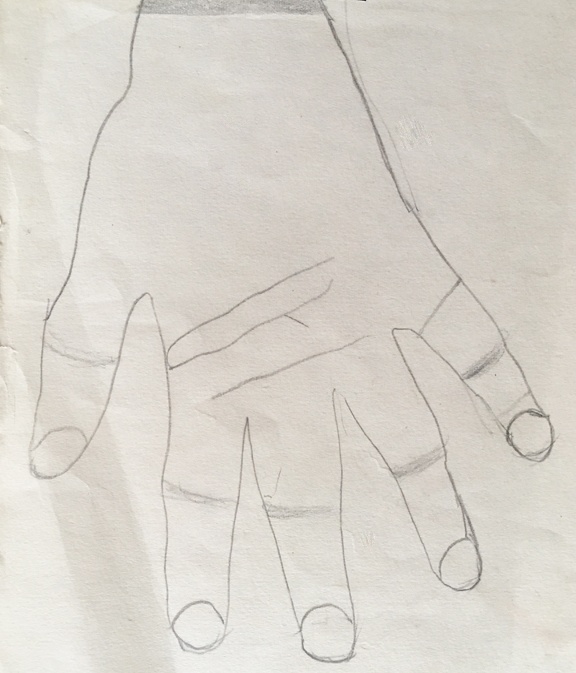 This is a drawing of my hand, probably on the writing paper I got for my birthday. I assume Mom traced it.

My Parents Began to Get Restless

As 1952 began, life in Wolseley was getting my parents down. Mom hated living in the small apartment instead of having a house with a yard (and grass instead of dirt). Dad was working long hours with both the store (what Aunt Ettie, in a letter written in November, 1952, called "gents' furnishings") and the mink ranch, and not liking either much—especially the mink part.

What I can't figure out is what Dad would have sold in a "gents' furnishings" store in the middle of Saskatchewan farming country. I have no memory whatsoever of the store.

As well, no doubt they also missed their many friends from Indian Head. I don’t think they’d made a lot of new friends in Wolseley. I can't remember the name of anyone from Wolseley except for the kids I played with.

Plus, we were still a long way from their families, so we didn’t see much of them. Of course, some family members visited us occasionally. Late in January, I got a letter from my uncle Jim, Mom’s brother. I’m guessing Mom preserved it because Jim likely didn't write a lot of letters to us. I'm not sure when he had visited us. Probably in the fall.

In case you can't read the writing, I've copied it below exactly as it was written. 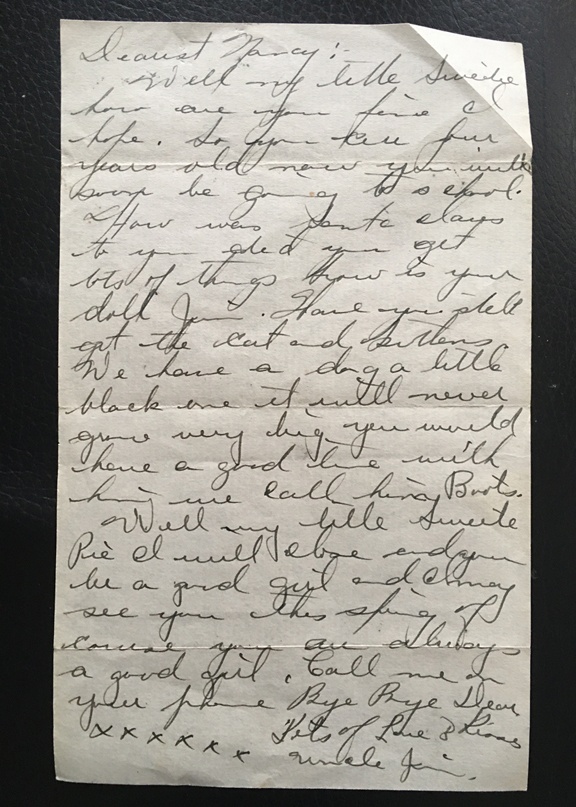 Well my little Sweetie how are you fine I hope. So you are four years old now you will soon be going to school. How was Santa Claus to you did you get lots of things how is your doll Jane. Have you still got the cat and kittens. We have a dog a little black one it will never grow very big you would have a good time with him we call him Boots.

Well my little Sweetie Pie I will close and you be a good girl and I may see you this spring of course you are always a good girl. Call me on your phone.

I don't know how much time Dad spent looking around, but by the summer of 1952, two years after we’d come to Wolseley, we were preparing to move to an even smaller town in a new province.

Mom looked forward to having a house with a yard with grass again, and I'm pretty sure Bozo did, too. Wolseley is actually a rather picturesque village, with the lake and the swinging bridge, but the back part of our apartment building left a lot to be desired.

I'm not sure which one of my parents was more adamant that they needed to move—but I'd guess it was Mom. She was the one stuck in the apartment with me all day without the friends she used to have. But it was Dad who made it happen. At 40 years of age, he managed to get out of the mink ranch, which he hated, and avoided going back into a butcher shop, which he also hated.

He'd enjoyed managing the "gents' furnishings" store, and building on that, he bought a small clothing store that would have men's, women's, and children's clothes, as well as dry goods, such as blankets, towels, etc. For him, it was a step in a direction he not only enjoyed but was reasonably good at. So we loaded up and moved to Crystal City, Manitoba.

When I think back, it must have been difficult for Dad to admit that the move from Indian Head had been a mistake. I don't know if he lost money through it, but even if he did, it was worth it to get out from under a situation both him and Mom disliked, and try something new. As Steve Jobs said in the quotation at the top of this post, they had the courage to followed their hearts.

Admitting you made a mistake is rarely easy. It's even harder when it involves uprooting your family and starting over.

Can you remember a time in your life when you've packed it in and given up so that you can start over?