In some alternate universe, it makes complete sense that my favourite toy from ages three to five was the plastic washing machine I got for Christmas just before I turned three.

It was less than eight inches high, but it actually worked!

You could lift the lid to put warm water into it with a cup. You could even add a tiny bit of soap. Then you put in a few small items of doll clothes: underpants, a T-shirt, a pair of pants or a dress.

After you closed the lid so the water didn't splash, you moved the lever on the front back and forth to make the red agitator in the middle swish one way and then the other. Since most of the barrel was made of clear plastic, you could watch the clothes being washed. 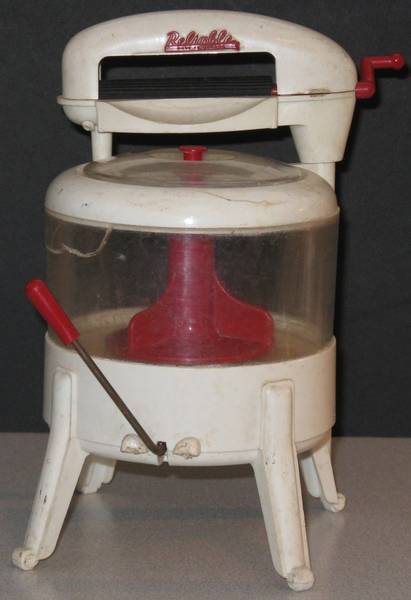 I don’t have a photo of my washing machine, but this one, which I found on eBay, is exactly what I remember.

There was a black hose at the back that had to be kept up over a hook when you had water in the barrel. When you were finished washing, you let the hose down and the water gushed out—hopefully into a basin or a sink. But sometimes the hose accidentally fell off the hook and leaked water onto the floor. Mom was never to happy about that.

After making sure the hose was hooked up again, you removed the lid and added cold water to rinse the soap from the clothes. Then you repeated the swishing motion. If you'd added too much soap, you might need to let this water out and add more cold water until there were no more soap bubbles.

When the water was clear and you'd let it go out through the hose, you carefully put each item of clothing through the wringer to get rid of any excess water. You did this by turning the red crank. Most of the time, the clothes would go through the wringer, but sometimes you had to tug a bit to help them.

Mom had a small indoor rack she used for hanging my clothes when she washed them, so I was able to use that. I'd use clothes pins to hang them up until they were dry.

I have clear memories of me sitting on the floor in the kitchen while Mom was cooking or clearing up, spending hours and hours with my washing machine, pushing the lever back and forth, hearing the slurp of the water, watching the clothes move back and forth, and putting them through the wringer.

I think what I liked the most (aside from playing in water) was that compared to my dolls, the washing machine gave me something concrete to do. It didn't just sit there. Plus (and this is a big plus) I got to splash around with water, and Mom didn't mind!

The truth is I wasn’t all that fond of playing with my dolls, which were almost the only toys I had. As you can see by the pictures in this and previous posts, I tended to take their clothes off and carry them around by their hair, which likely wasn't what Mom thought was proper.

According to the little baby book where Mom recorded things like my first words and milestones, for my third birthday, I had a "little party" with Donnie Fubar, Phoebe Banbury, and Mrs. Banbury. My guess is that Mrs. Banbury was a friend of hers.

As for gifts, someone named Edna gave me an apron. Phoebe's gift was a dustpan. Mom and Dad gave me a set of two dog pictures for my bedroom wall. I believe they were small and ivory with a pale blue inset with black heads of Scottish terriers. Because we didn't have very much, pretty well everything we did get stayed around for a long time. (A more prosaic form of minimalism than is the case today.) I also got cards from both grandmothers, Uncle Bert and Aunt Ethel, and Scott and Greg Robison.

Again, pictures back then didn't happen indoors, so there aren't any.

But seriously, my birthday presents were an apron, a dustpan, and a couple of pictures for my walls? Not even a new book?

In that alternate universe, it also makes complete sense that the kids I played with were mostly boys.

Mom's little book also had a page next to the third birthday page where she was asked to list my playmates. Mom wrote in Donnie, Scott, Greg, Earl, and Olive. I have a few of pictures of Donnie, Scott, and Greg, but I have no idea who Earl and Olive were. I assume they were other kids from the apartments.

It frustrated Mom no end that the kids who lived in the apartments close to us in Wolseley, and who I therefore played with the most, were boys. In her mind, this just aggravated the interest I already had in “boy” kind of things. Like digging in the dirt. And pretending I was a cowboy. 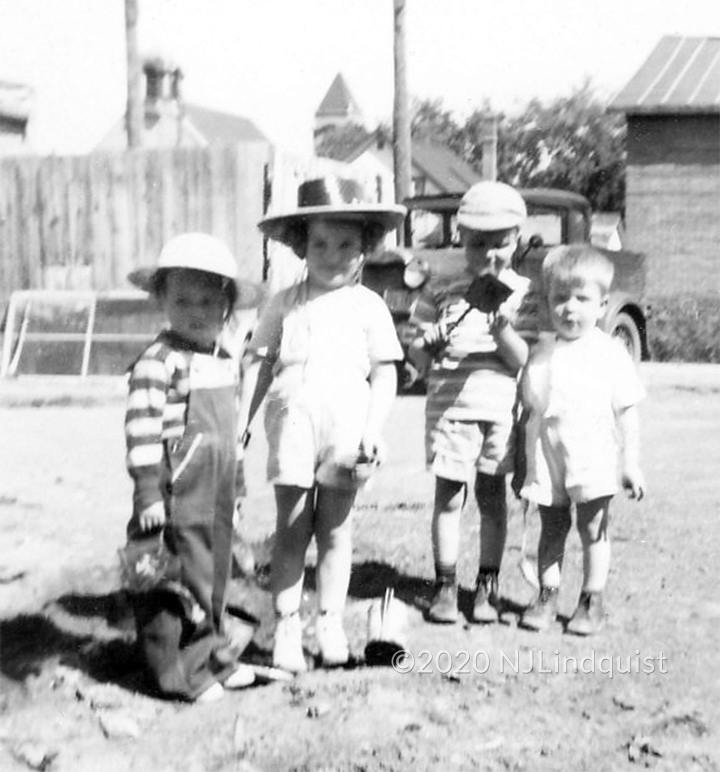 Since there wasn’t much shade in the backyard where I played, Mom decided I needed a hat to wear. We went to the small store in town that carried some kids' clothes, and I found a red straw cowboy hat. Mom thought it was a boy’s hat and got me a different one, but I continued to beg and plead, and in the end, my dad bought the red one for me. Mom continued to hate it, but I absolutely loved that hat. Now all I needed were the guns to go with it!

I Start to Make Comparisons

That summer, I began to notice that not every mother was like mine. Well, at least the boys' mothers weren't. They didn't seem to care if the boys got dirty, and they didn't tell them to be careful all the time. I began to realize that in Mom’s mind, little girls didn’t do the things boys did. Little girls were supposed to be clean and tidy and well-behaved. I began to think boys had it better than girls. And I didn't see why there should be a difference.

Presumably, I could have just gone along with Mom and become a quiet, well-behaved little girl. But something in me resisted. I didn't think it was fair, and I wasn't going to meekly accept it. I wanted to be like the boys I played with who seemed to get away with a lot more, and who hardly ever got dressed up, and certainly didn't have to wear frilly dresses!

So Mom and I continued to battle. But because of where we were living at the time, she really didn't have much choice, so I kind of won. Mom had to get me some overalls and a few T-shirts and some shorts because dresses wouldn't have survived our back yard.

One wonderful thing that happened that spring is that Dad and Mom got me a tricycle. I loved that tricycle.

Yes, I liked to ride it. But it had other uses.

One of the boys had a small red wagon, so we'd get a parent to tie the wagon's handle to the back of the tricycle. Then, we could haul younger kids around the yard. Or, with the help of our pails and shovels, we could move dirt around.

If my dolls were present, they were getting rides in the wagon or lying on the dirt.

But even though Mom let me wear "boys' clothes," she still had to keep them clean. And that was difficult because I didn't have a lot of clothes. Monday was washing day, but Mom continued to rinse a few of my things out by hand in the evenings. She began to despair of ever keeping my clothes clean. 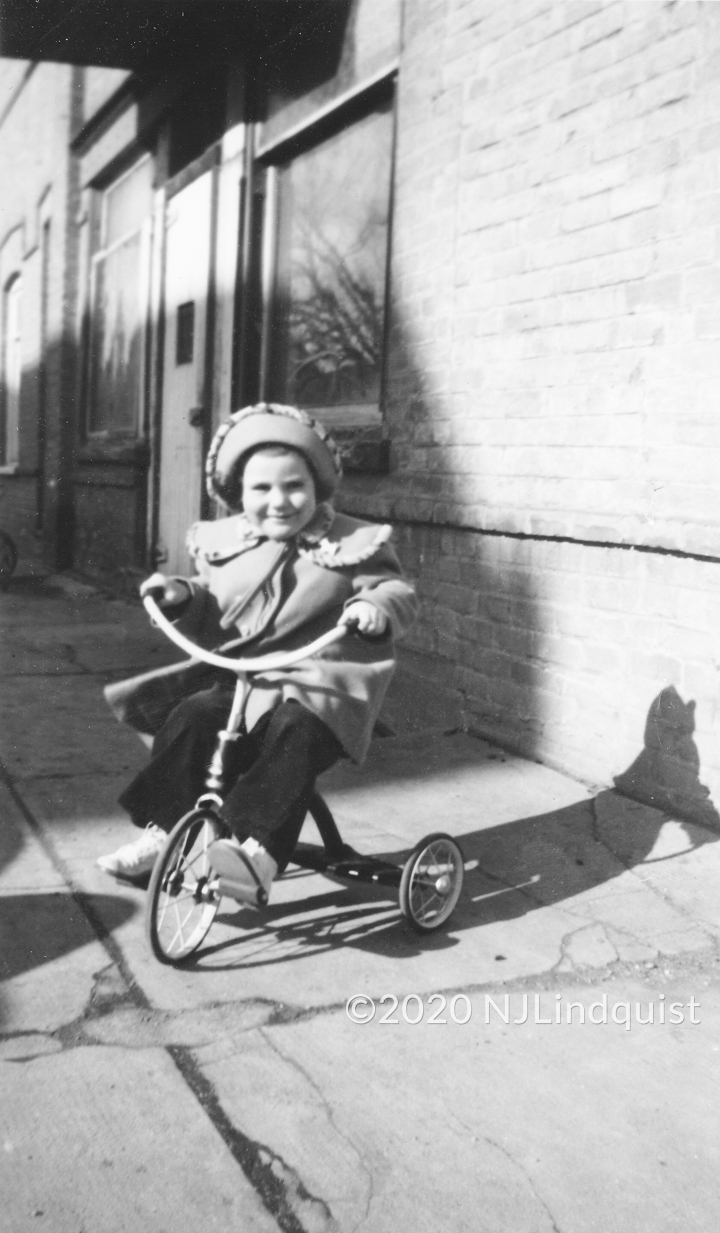 My first bike! This picture was taken in the spring in front of the building where we had an apartment above a business.

The hat Mom liked. Notice the doll has some clothes on, but is upside down. I think this was Donnie. 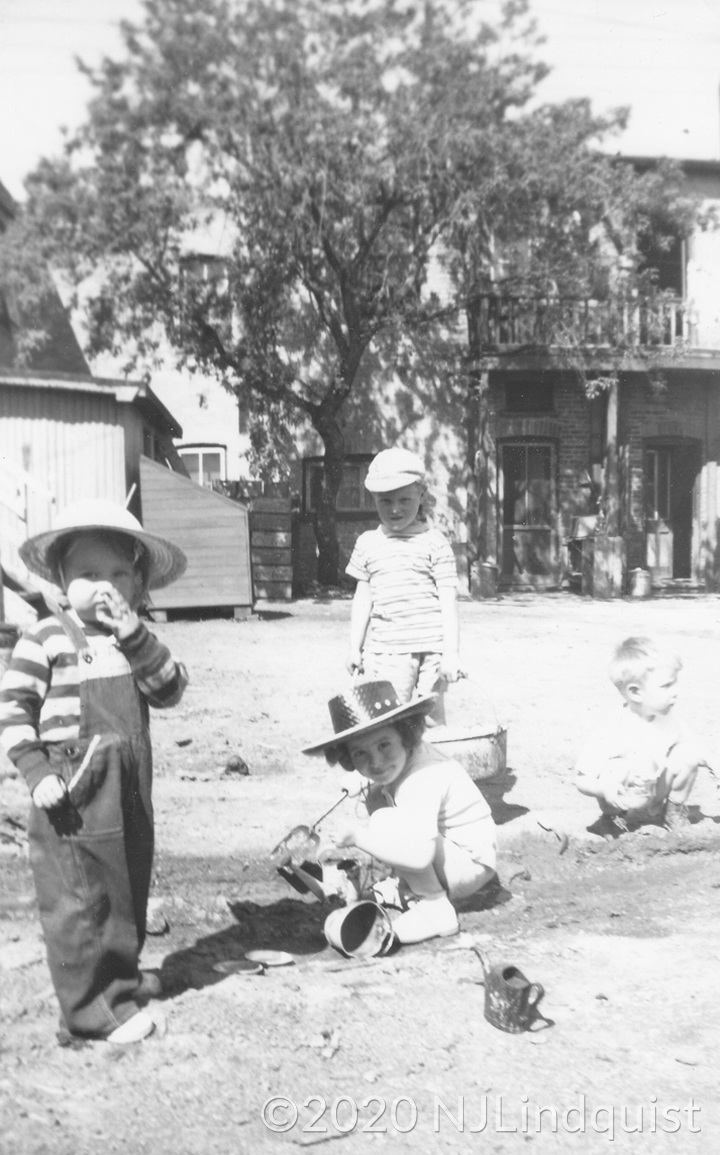 Digging in the dirt, and making mud, with the boys.

When I look back at our time in Wolseley, I can't help thinking how much I benefited from being able to play in the dirt with the boys. If I'd only had girls to play with, or if we'd lived in a house with a nice grass yard, I might have become a different person.

As it was, I had a great time, and in some intrinsic way, I learned that if I stood up for myself and didn't let Mom win all the time, I could find out who I was and who I wanted to be.

And yes, I still kind of like to play in dirt, although now I call it gardening (and I usually wear gloves).

If we hadn't moved to Wolseley and lived in that apartment, I might never have had a chance to find out I loved playing in the dirt.

Can you think of a time in your early years that might have altered who you are?