“Those who have rebellious hair types understand the toxic relationship that you develop with it. You’ve learned love it over the years, but there are still times where you kind of wanted to pull it all out.”

When I was young, Mom and I battled incessantly over something I had absolutely no control over—my hair.

Everyone said my hair was lovely, but as it grew longer and thicker it began to get tangled.

This meant that when Mom brushed or combed my hair with my lovely nylon comb and brush set, my hair sometimes got pulled. And that hurt. So I cried, fought to get away, and yelled. As each month passed, my hair grew a little longer and my battles with Mom got worse.

Mom had very fine, straight hair, which was easily combed. She went regularly for perms to make it curl, but her hair was somewhat limp, so the best they could do was create waves and give it some "body."

Dad had straight hair which he kept quite short. It seemed to be quite well-behaved.

Neither of them had had any experience with hair like mine. And it never once occurred to either of them that combing and brushing my unruly hair the “normal” way might not be the best idea.

When I thought about it years later, I realized that Mom’s dad and two of her brothers had curly hair, but I guess since their hair was always kept short, it never became an issue. Or at least not one that involved Mom.

Mornings at our home became a battle. Then there was another battle after lunch when Mom changed me into a dress and got me ready to be seen in public and brushed my hair to make it look good.

Bath time was the worst!

After I’d grown out of the small basin, Mom moved on to a galvanized steel wash tub like this one.

I normally had my bath on Saturday nights in the big wash tub Mom used for soaking laundry. Dad would put it on the kitchen floor where it was warm.

The picture shows me with a friend in a wash tub on a summer day. (Likely theirs because ours had no dent in the side.) Our moms would let us get in the tub to cool off.

Believe it or not, I still have our wash tub. It's sitting on a shelf in our garage. We've used it for various things over the years. 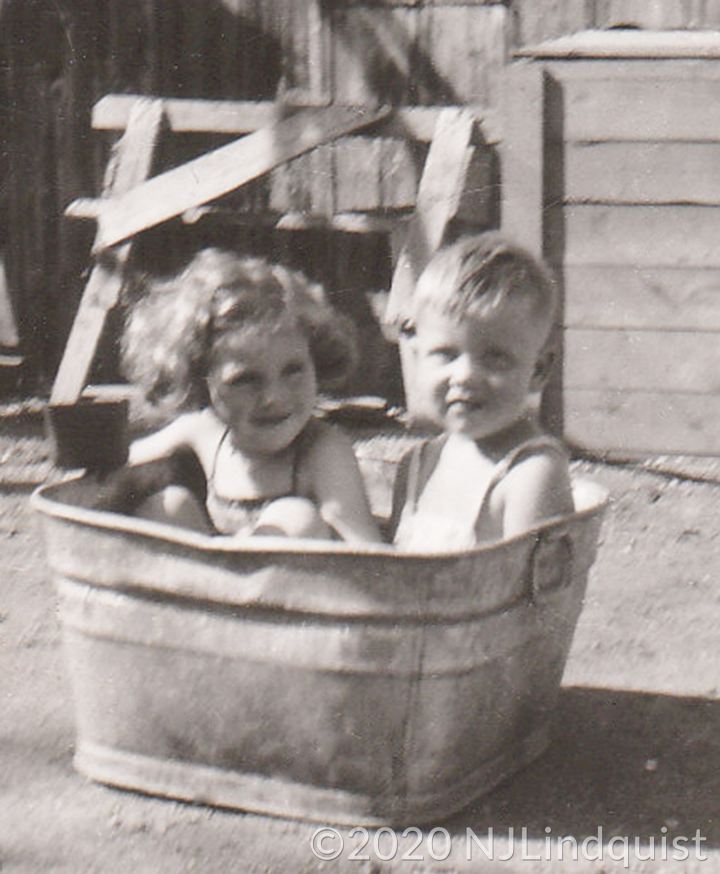 A wash tub served as a "paddling pool" on hot summer days.

Back to Saturday nights.

First, Mom would give me a bath, which was okay. I liked to splash a bit and she would put a towel or blanket under the tub so the floor didn't get wet.

But soon it would be time to wash my hair before the water got cold.

Dad would pour warm water over my head to get it wet, and then Mom would add shampoo and scrub my hair and scalp to get it clean. Then Dad would pour more water over my head to rinse the soap out. And then one of them (usually Mom) would try to wring the water out of my hair like they would a pair of socks. Only then would they let me get out. Mom would wrap me in a towel while Dad rubbed my hair to get it dry. Seriously, it was as if having wet hair would doom me to get a cold or some other nasty thing.

I hated having my hair washed for several reasons.

First, the shampoo sometimes got in my eyes, and it stung. A lot! Then the water was sometimes a bit hot. What felt okay to Dad's hand sometimes felt too hot to me. So I'd cry or complain and he'd have to add cold water. But the worst part of the whole thing was when they tried to get the water out of my hair by wringing it. They always pulled my hair and made my scalp sore. So I’d basically cry and struggle for the entire time they were washing and drying my hair.

I actually think my scalp is extra-sensitive because I've had hairdressers who washed my hair and made my scalp hurt, and I never went back.

The good news is that I normally only had a bath on Saturday nights, so that kept our major battle down to once a week. Unless I got overly dirty during the week, of course.

The daily battle was restricted to Mom’s trying to make my hair behave.

First, Mom had to fight me to get hold of me so she could brush or comb my hair.

Then my hair would only stay put for a few minutes before it was all over the place again. It really was as if my hair had a mind of its own and barely waited until she was finished and then did whatever it wanted to do.

She did put barrettes in to try to hold it down. I remember there were pink ones and white ones and blue ones. But they didn't stay in very well because my hair was too thick. So they worked for a short time, but not for long.

No matter what she tried, Mom inevitably lost the battle to control my hair.

It was hardly my fault that my hair behaved the way it did, yet the bulk of the battle always ended up with Mom and me angry with each other.

Mom often ended up in tears herself, but she had no idea what to do. In her world, hair was meant to be brushed and combed, and she was determined to make my unruly hair behave.

So I learned to hate getting dressed up to go any place because that inevitably meant another battle with my hair.

Was this issue a nature vs nurture problem? My hair was clearly part of the package I'd been born with. But nurture was involved since Mom had no clue how to keep my hair from being a daily bone of contention.

As you can see from the picture here, as I approached my third birthday, my hair was getting longer, thicker, and curlier. 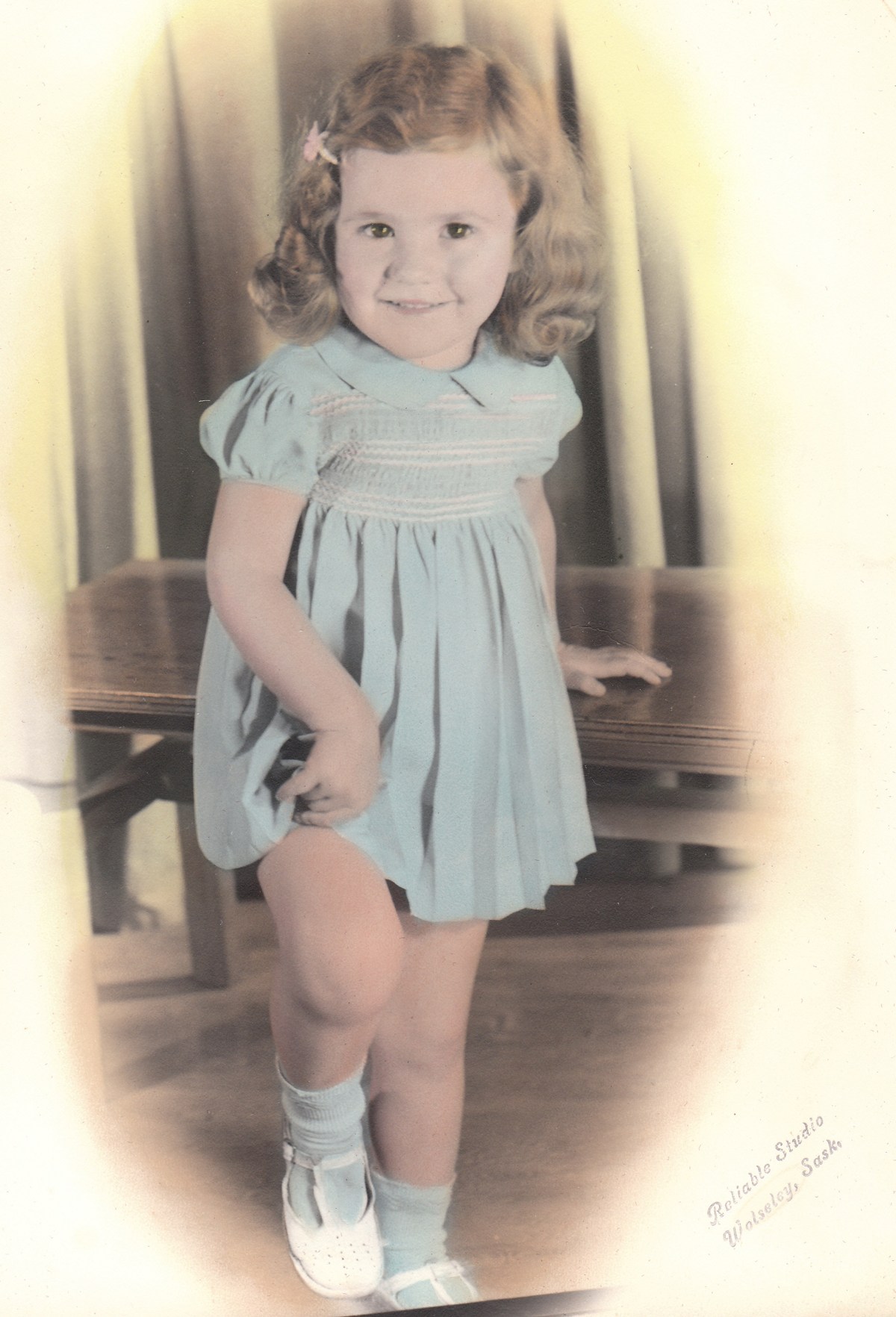 The problem finally came to a head a couple of months before I turned three. Trying to transform a tangle of frizzy curls into a smooth hairstyle simply became too much for Mom.

A few days after they had this formal picture taken of me when I was two years and ten months old, Mom convinced my dad to cut about five inches off my hair.

From that day until I turned twenty-one, my hair was kept short—sometimes really short!

Although it still had a mind of its own, and my scalp still hurt when my hair was washed each week, on a day-to-day basis, the shorter it was the less of a problem we had.

For anyone wondered about the colour of my hair, here it is. Yes, Mom kept some of my hair from my first haircut! 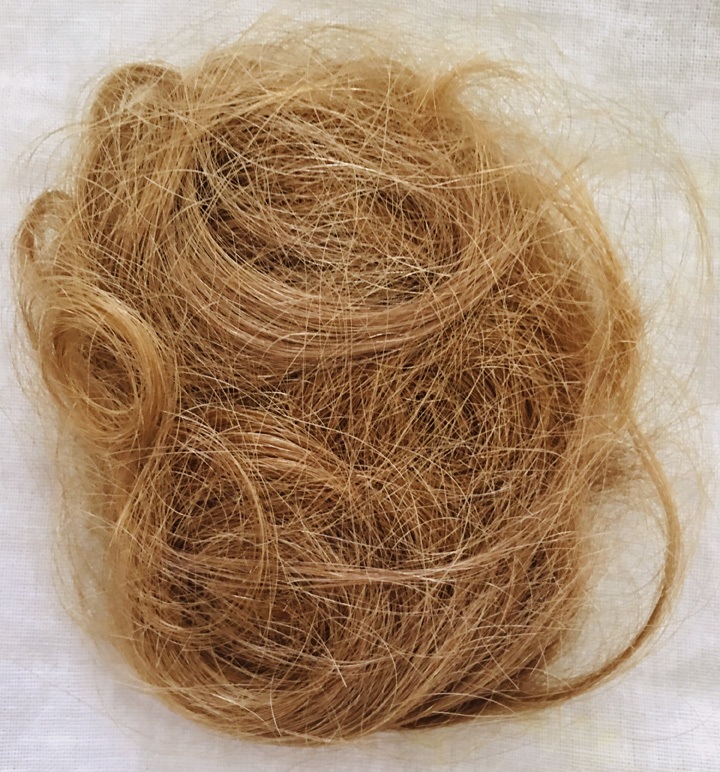 Some of the hair from my first haircut.

Years later, after I finally let my hair grow long, Mom never ceased asking why I didn't cut it short because it looked so much better then. I sometimes argued, but mostly learned to ignore her comments because there was no point in making it an issue.

The truth? To this day, I hate having anyone else shampoo my hair, and I rarely go near hairdressers. Except for maybe a dozen times, I’ve cut my own hair since I was twenty-one.

And, sad to say, it wasn’t until I was fifty years old that I finally discovered why my hair was so badly behaved. (See my posts about my hair.)

Was your hair a problem for you when you were young? Or was there something else about you that became a battleground with your mother or another member of your family?

How did it work out?