LoveChild 22: Big Changes in Our Lives

“Life is like riding a bicycle. To keep your balance, you must keep moving.”

Dad Stops Being a Butcher

Dad was working long hours at a job he’d never particularly liked, and Mom had never wanted him to work in a butcher shop in the first place. Sides of beef were heavy, and it was a lot of hard working cutting them up.

Then there was the cold of going in and out of the walk-in refrigerator. Dad had nearly died from pneumonia shortly after he and Mom married, and a part of her was always worried that the hard work and constant cold would cause him to have pneumonia again, and that this time he’d die. However, with only a grade 8 education, there weren’t a lot of options.

But they were both restless and looking for a new, and hopefully a better, opportunity.

I know from a letter* Jennie Shaw (Dad's mother) wrote to his her late husband's nephew Robert, who lived in Ireland, that shortly after they brought me home, Dad started looking for other ways to make money. The result was that by the fall of 1948, he'd sold his butcher shop and bought a hardware store.

I assume he didn't like the business, or, more likely, felt it wasn't going to provide enough income, because some time toward the end of 1949 and the beginning of 1950, my parents and I, plus our dog Bozo and our cat Fluffy, moved to Wolseley.

We Move to Wolseley

According to the town's website (http://wolseley.ca/), Wolseley was incorporated in 1898 and named after Colonel Garnet Joseph Wolseley. Many of the original buildings built in the days before and after incorporation are still standing, including the first Beaver Lumber office, the Town Hall/Opera House, and The Banbury House Inn, among others. Together, with the Wolseley Swinging Bridge, which spans Fairly Lake, they create a picture perfect community.

We moved to Wolseley because Dad had become a partner in a mink ranch located somewhere in between Wolseley and Indian Head. Whether he continued to operate the hardware store or not I don't know. I think not. A letter from Margaret's brother, Jim, suggests he may have bought or started a clothing store for men. 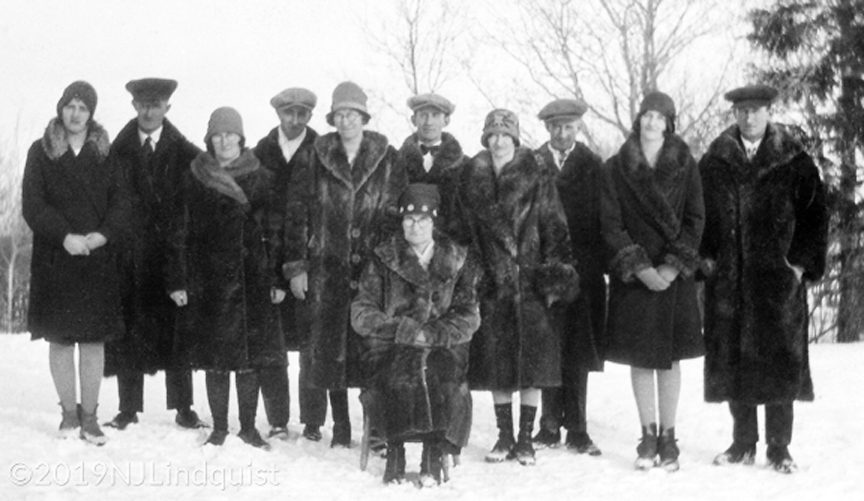 Dad's family somewhere in the 1950s. Lots of fur coats or collars! From left, Jean, George, Grace, Robert, Agnes, Walter, Margaret, Bill, Sarah, and Lorne (I hope I got them right!) Their mother, Jennie Shaw, is seated in front.

As you can see by the above picture of Dad's family, most of whom were not particularly well-off financially, fur coats were very popular at that time for everyone who lived in areas where the winters were cold. Presumably, Dad thought he could find a way to make some more money by getting involved.

By the 1950s, estimated sales of mink were worth three to four times as much in money terms as all other furs put together. Some six million mink were being ‘produced’ annually by this time.

I have no idea how Dad connected with the other man who became his business partner, or whether it was someone from Indian Head or from Wolseley, but Dad and Mom decided this was their big chance and went for it. Since Dad had grown up on a farm, I assume he felt he had some idea of what was involved. I also don't know if they bought a mink farm or started their own.

The only picture I have of the buildings is one taken in mid-winter. The mink pens appear to be partially underground, but I have no idea how deep the snow was. From the tire tracks, it looks as if the snow has been brought over and packed against the buildings to act as insulation. 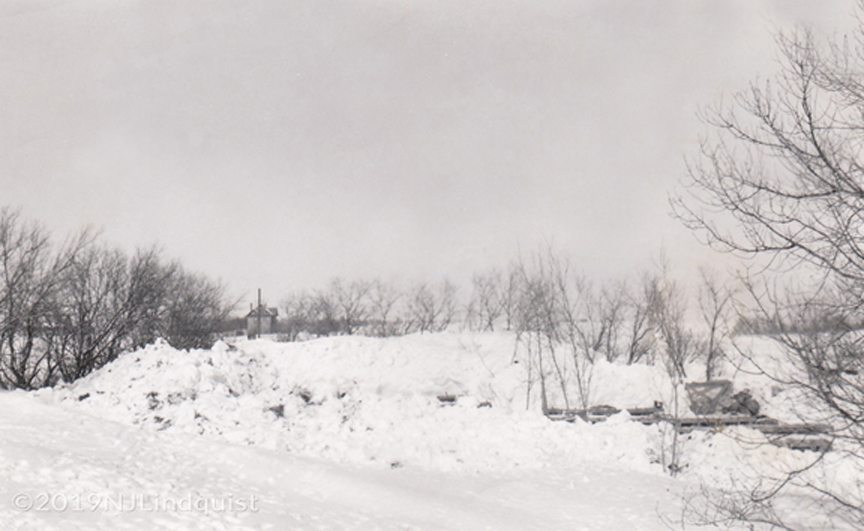 Mom hardly ever went near the mink, so I didn’t either. I think dad took me with him a few times.

My only memory of the mink farm is a dark building with cement floors and rows of cages with slinky animals whose black eyes glittered. I believe the cages were on shelves that were higher than me, so I had to look up. Or they might have been stacked.

The whole building had a smell I didn’t much like. I don’t remember any sounds other than the rustling.

I was told not to get close to the cages because the mink might bite. I didn’t like being there and got out as soon as possible.

A short video from a mink farm. 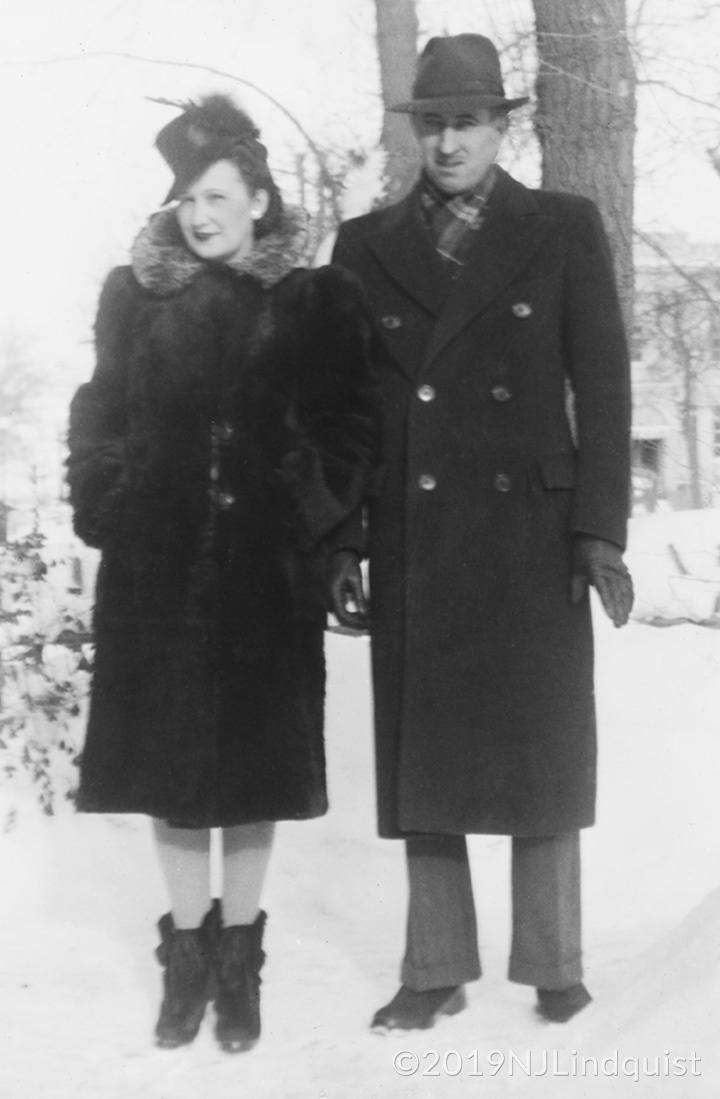 On the left is Mom in her previous winter coat, which I believe was dyed lamb with a sheared lamb collar.

On the right is Mom wearing a new coat, which I think was beaver.

This is the first picture I have of us that says we were in Wolseley. It was taken on December 15, 1949. 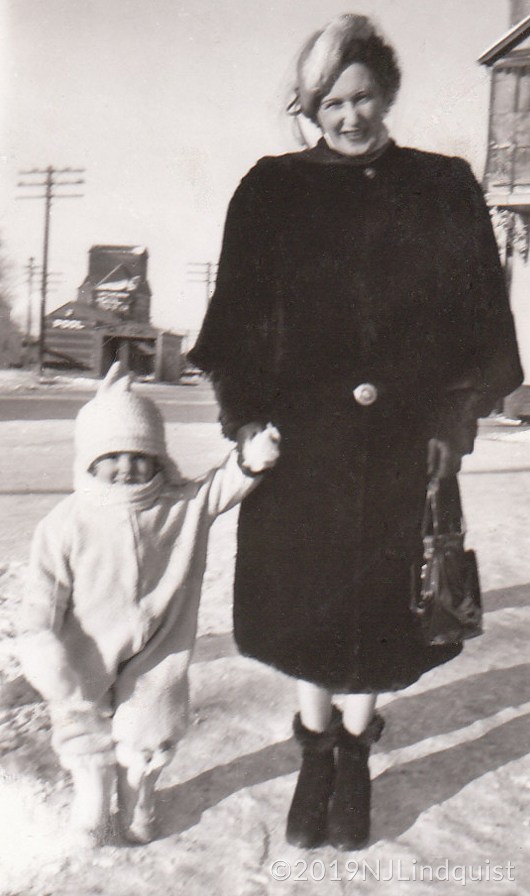 I believe lamb was cheaper that beaver, and beaver and muskrat were much less expensive than mink. So Mom had moved up from lamb to beaver.

I had no idea Mom's fur coat was made from the skins of animals. All I knew was that it felt very soft and it must be warm. But my knowledge was about to be expanded.

At some point in the first year or so, Dad had mink stoles (or scarves or tippets) made for Mom and me.

My stole consisted of a single golden-brown mink pelt that was joined at the front by a clasp with a hook on one end and a loop on the other. The animal’s head and tail were still there, although black beads had replaced its eyes.

While the fur felt soft and warm to touch, I could barely manage to look at it, never mind wear it. Mom would put it on me to go to church or visiting, and I'd feel sick the whole time. I avoided touching it because when I did all I could think about was that this was a living animal that had been killed so I could wear its fur. And it wasn’t even as though the stole kept me warm. It was purely for appearance. 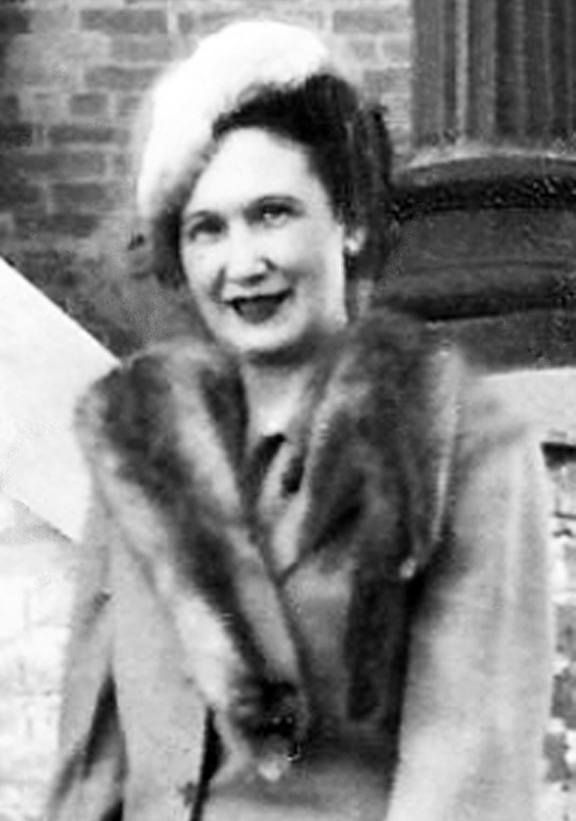 Mom loved her stole, which was basically the same as mine except darker and made from two larger pelts. Of course, she’d have preferred an entire mink coat, but Dad was raising the mink to make money, not to get her a new coat.

Mom kept both stoles in a special hat box on a shelf in her closet, and every time I was in her bedroom when her closet door was open, my eyes would be drawn to it. I really hoped Mom would forget the box was there. I was so glad when I was finally able to convince her that my stole was too small for me to wear.

From my perspective, our lives continued much as before, except that instead of living in a house, we lived in an apartment above a store on one of the two main streets of the village.

As well, our house in Indian Head had had a yard with grass I could play on. The children who lived in the apartments above the stores played in an alleyway behind the buildings, which was basically hard-packed dirt. As I'll show you in my next post, the challenge of not getting dirty had been ramped up.

*Huge thanks to Billy Shaw, the son of Robert Shaw (George Brown Shaw's nephew), who sent me photocopies of two letters my grandmother had written to his dad in Ballymacarn, County Down, Ireland, dated Dec. 6, 1948 and April 12, 1949.

For my parents, this was just one in a series of moves. It was the first for me in one way, but also the third. I'd already moved from the Salvation Army home in Regina where I'd lived with my birth mother to the home of a foster parent, and from there to Indian Head with my adoptive parents. Now I was going to a new town, but with the same parents.

Have you lived in the same area your whole life, or have you made a few or a lot of moves? Have you ever thought about how staying in one place or moving has affected you?