LoveChild 2: My Son Challenges Me

“Any transition serious enough to alter your definition of self will require not just small adjustments in your way of living and thinking but a full-on metamorphosis.”

Have you ever been in a room filled with adults when someone walks in with a newborn baby?

Most of the people will be propelled as if by magnetic attraction to gather around said infant, cooing and making faces and congratulating the new parents. Well, I’m not one of them. Now teenagers—that’s a different story. But I digress…

To be honest, when I was in my twenties, I wasn’t even sure I wanted to have kids. We never actually tried to get pregnant; we just didn’t try not to, if that makes sense. So I was kind of surprised when, after first thinking I had food poisoning from some bouillabaisse I ate at a restaurant in Vancouver the night before we drove home to Regina (not a pleasant journey), I discovered I was actually pregnant. (No, even though it wasn’t at fault, I’ve never been able to eat bouillabaisse since.)

I reacted to the news about my pregnancy in an, “Oh, so that’s where we’re going,” sort of way.

And since the morning sickness only lasted a short while and was controllable if I drank tea and ate toast in the mornings, I kind of liked being pregnant. It was neat seeing and feeling a brand new person come into being inside my body. But it was very abstract, too. I had no idea what to expect when said being arrived and began to cry in the middle of the night. The truth was, I had zero experience looking after babies.

Then my first son was born and I discovered, to my astonishment (as well as everyone else’s), that I took to being a mother like a duck to water. (No pun on my title intended).

(Should you want to read more about my first son's birth, I wrote a blog about that here.)

Years passed, and we still had three younger sons at home when our oldest son married.

At the age of 48, I wasn’t anxious to become a grandmother. I didn’t even own an apron, and I rarely baked cookies.

Not that I wasn’t opposed to the idea of one day having grandchildren; I just hadn’t been thinking or dreaming about it happening any time soon.

On the morning of September 17, 1996, I dropped my eldest son and his wife off at the hospital and drove home (five minutes away) to wait for his call and do a bit of praying.

Some hours later, I went to the hospital to see our first grandchild, a beautiful little girl. I carried the ginormous stuffed Tigger Les and I had bought when we were at Disney World in Orlando that spring, shortly after finding out about the upcoming baby.

For some reason, I’d decided Tigger was the perfect gift for the baby, ignoring the fact that she’d be at least six years old before she could carry him. 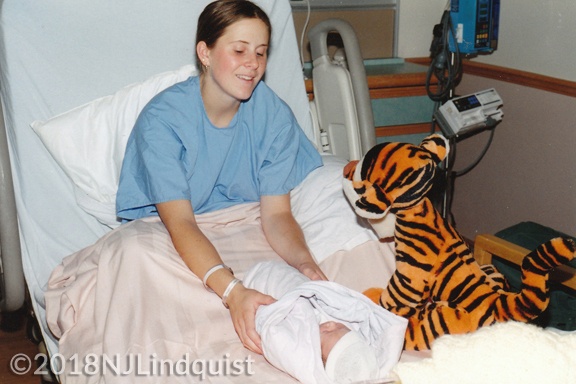 Granddaughter and her mom with Tigger, who still hangs out in her room.

Baby and parents were doing well, so I visited for a short while and left, intending to return later in the day with our younger sons. (Unfortunately, Les was in Atlanta for business meetings that week.)

To my surprise, our son followed me into the hallway.

I looked at him in surprise, wondering if there was a problem he didn’t want to talk about in front of his wife.

His piercing blue eyes stared into my hazel ones. “The doctor asked if there are any family medical problems.” 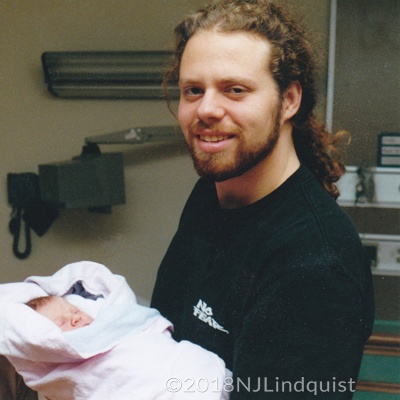 Our oldest son with his first child.

I shook my head. “Not really. Your dad and I are healthy. And your dad’s family is generally healthy. Some of them have a tendency toward hypoglycemia, but I don’t think there’s anything else.”

“Didn’t Dad have a brother with some kind of illness?”

I explained that his younger brother, Keith, had had cerebral palsy, but that it was likely caused by a lack of oxygen when he was born.

Our easy-going son wasn't finished. “What about your parents?” he asked me.

I tilted my head, puzzled. “Well, Grandma had a heart attack when she was in her 70s, and Grandpa died of lung cancer, but he started smoking when he was 9 or 10 and kept going until well into his 40s, so that was likely the cause.”

He shook his head. “No, I mean your real parents.”

My stomach flipped. Over the years, any time a doctor had asked about my medical history, I’d just repeated the phrase, “I’m adopted and I don’t have any information.” Every one of them had scribbled something on their info sheet; not one had ever questioned my statement.

Over the years, Les and I had talked a few times about trying to find out more, but I’d never seriously considered it, and although Les had been surprised by my lack of interest, neither he nor anyone else had ever pushed me to find out. The truth was, I’d never had any desire to find out more about my birth parents, and I had no intention of doing anything now. Besides, I knew my mother would be upset if she thought I was looking for them.

Now, I said, “You know I was adopted. I don't have any information about my birth parents.”

My six-foot son stood his ground. “Yeah, I know. But is there a way to find out?”

I’d assumed the conversation was over and I was ready to move on, but at his words, I shrugged. “No idea. I’ve never worried about it.”

And then it hit me. Why had it never once occurred to me that my adoption was just as much a part of my sons’ identities as it was mine?

It would be part of my grandchildren’s identities too. And on and on, ad infinitum.

I reached up to smooth my hair, a nervous habit I try to restrain. “I’ve never tried to find out,” I said. “And you know Grandma. She’d have a fit.”

“She wouldn’t have to know.”

It was true. My mother was slipping into dementia.

“I guess we might be able to keep her from knowing,” I said. “Unless she asks me outright.” My mother had a scary ability to always know when I wasn’t revealing the entire truth, so I’d rarely been able to keep things from her.

“So will you try to find out?”

I took a deep breath. “I don’t know if I can find out anything.”

“It would be good to know—just in case there is something.”

I nodded, then turned and walked out of the hospital.

I had come in carrying my favourite Pooh character, a grinning Tigger; I left burdened down with an invisible load, feeling like a dismal Eeyore.

While some adopted children long to know their roots, I’d honestly never been concerned. I was happy with the life I had; why rock the boat? What were the chances it would be a good thing for me to find out who I really was? Might it not actually be better for everyone if I continued to ignore that little question?

Figuratively speaking, I’d always kept the whole adoption thing in a little box hidden on a shelf in the back of my brain. Only on a couple of occasions had I taken that box down and raised the lid a crack before putting the box firmly back on the shelf, right at the back. Now, my oldest son was asking me to bring the box out into the open and remove the lid. But who knew what I’d find if I opened that box? My mother could be a drug addict who would want to move in with me. There could be all sorts of relatives I really didn’t want to know. Easier to skip it, ignore it. I didn’t need the possible complications.

Plus, there was another reason I was content to leave things as they were. I truly believed God had placed me where I was for a purpose. Every time I’d considered doing something to find my birth parents, he’d told me not to worry, that everything was okay. And I’d never doubted that.

I had a big decision to make.

Did I owe it to my sons and my newborn granddaughter to try to discover the truth about who I was? I shook my head. What was I thinking? Now that I'd realized this wasn’t only about me, whether I liked it or not, the decision had been made. I had to do what I could to find out. I quickly prayed, “Lord, if you want me to do this, please guide me. I only want to do the right thing.”

Of course, I followed through on my promise to try to find out more. And I'm writing this book—well, blogging it for now—because what I learned made me look at my entire life in a new way. 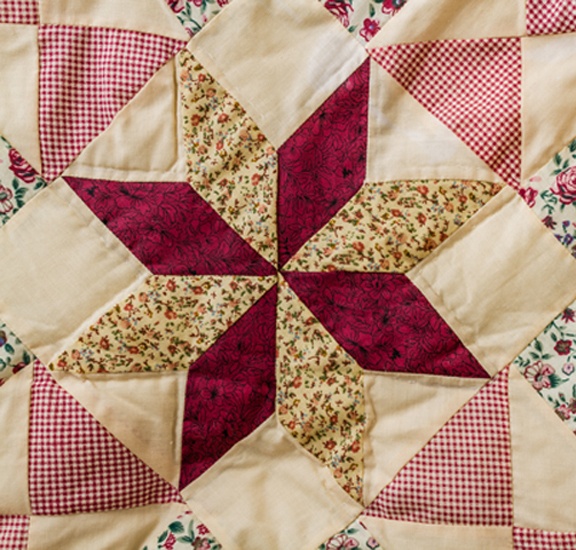 While the "good" side looks amazing, the back is a mass of threads and cut ends of material. But we never see that side.

I’ve often heard people say our lives are like a quilt, where God sees the beautiful, finished side while we only see the underside with all the fraying edges and dangling threads.

I believe God metaphorically picked me up and held me so I could catch a glimpse of my life as he sees it. He did that partly so I would know that my trust in him was justified, and partly so I could share my story with others who have also wondered whether they are ugly ducklings or swans.

Has there ever been something in your life that you thought was only about you until at some point you realized it also involved or affected other people?

Does my quilt illustration resonate with you in some way?