“They say a person needs just three things to be truly happy in this world: someone to love, something to do, and something to hope for.”

Moving to Another Province

When Robert and Margaret left Brandon for the very small town of Wapella, Saskatchewan, I'm not sure what exactly they did or where they lived. Margaret's mother's family had lived there, and Margaret had been born there, so someone from her family might well have suggested the move.

With a large number of young men joining the war effort, jobs were now available that hadn’t been before. And because Robert was now deaf in one ear, he wasn't qualified to become a soldier.

While I’m sure Bob’s family members were unhappy to see him move so far away, by this time, he and Margaret were more than ready to finally be on their own!

In the last few posts, I've called my dad Robert because that's what his mother and most of his family members called him. However, Margaret, his friends, and a few of his siblings called him Bob. So, after they moved to Indian Head, he was rarely called anything but Bob.

A New Town and a New Family Member

It's possible that Robert rented or managed a restaurant in Wapella for a while, but whatever he did, they didn't stay there very long. They did, however, become lifelong friends with at least one other couple, Eve and George Markham. And then they moved further west on the #1 highway to Indian Head.

The picture below shows Bob in front of a house in Indian Head, Saskatchewan, in November of 1939, and Margaret perhaps in the back yard the following spring. I’m assuming they were renting a room in the house shown here because they had a number of photos taken outside this house over a few years, and I don't believe they could have afforded the rent on a whole house. But I could be wrong.

From what I recall Mom saying, they moved to Indian Head because Robert found a job opening in the City Meat Market, a busy butcher shop in Indian Head owned by Dave Irwin. Robert's past experience would have more than qualified him for the job.

Either while they were in Wapella or right after moving to Indian Head, they added a German shepherd named Bozo to their family. (See my post "German Shepherd, Meet Baby).

All my dad ever told me was that he "got him from a man." (I assume his name—Bozo—came with him.) He'd have been just under a year old at the time.

They must have bought their Kodak Brownie camera soon after their move because from then on they began to have pictures. 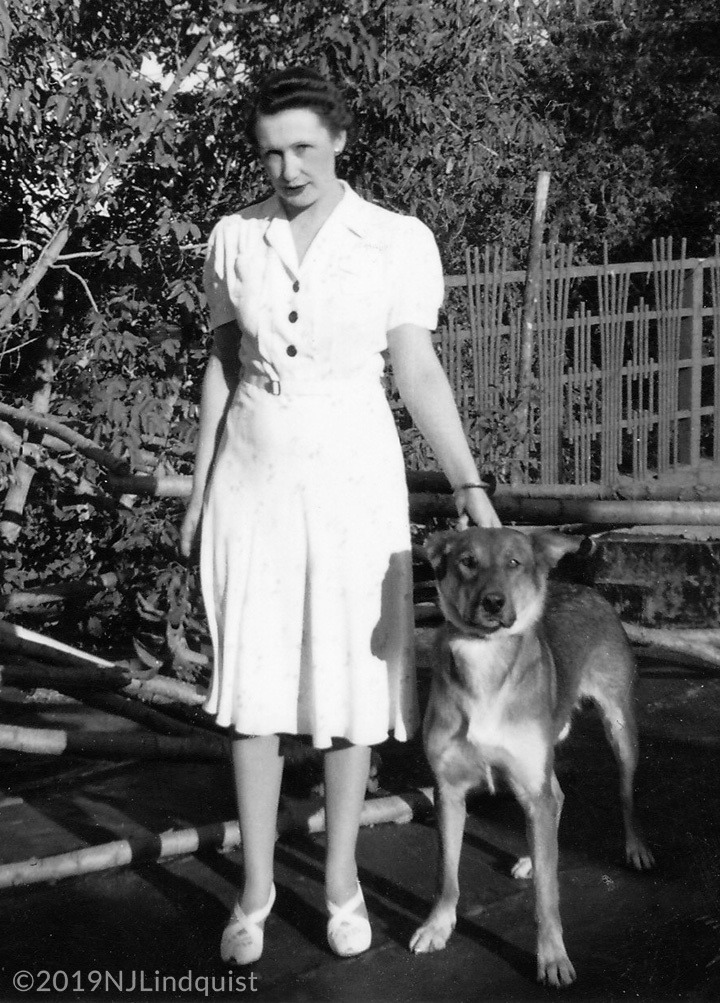 Bob and Margaret must have visited Rossburn and Yorkton (which would be on the way) in the spring or fall of 1940 because there are a number of photos from that year. I'm wondering if Margaret's brother Hughie got married then, but I don't know the date for sure.

In any case, Hughie and his wife Oral (who was also from Rossburn) were living in Yorkton. The two top pictures were taken in Rossburn and the bottom two in Yorkton, in the back yard of the place where Hughie and Oral were staying.

I'm assuming they would have travelled by train unless Bob was able to borrow a car. They didn't own one at this time. 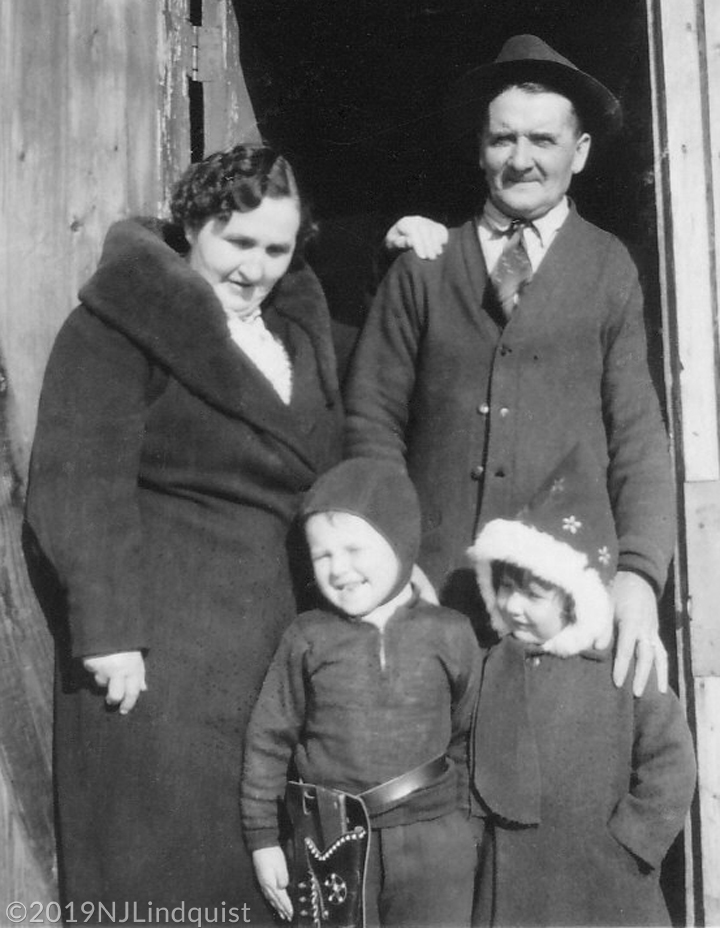 Margaret's parents Alice and Bruce MacDonald, and her youngest brother and sister, Terry and Fay. 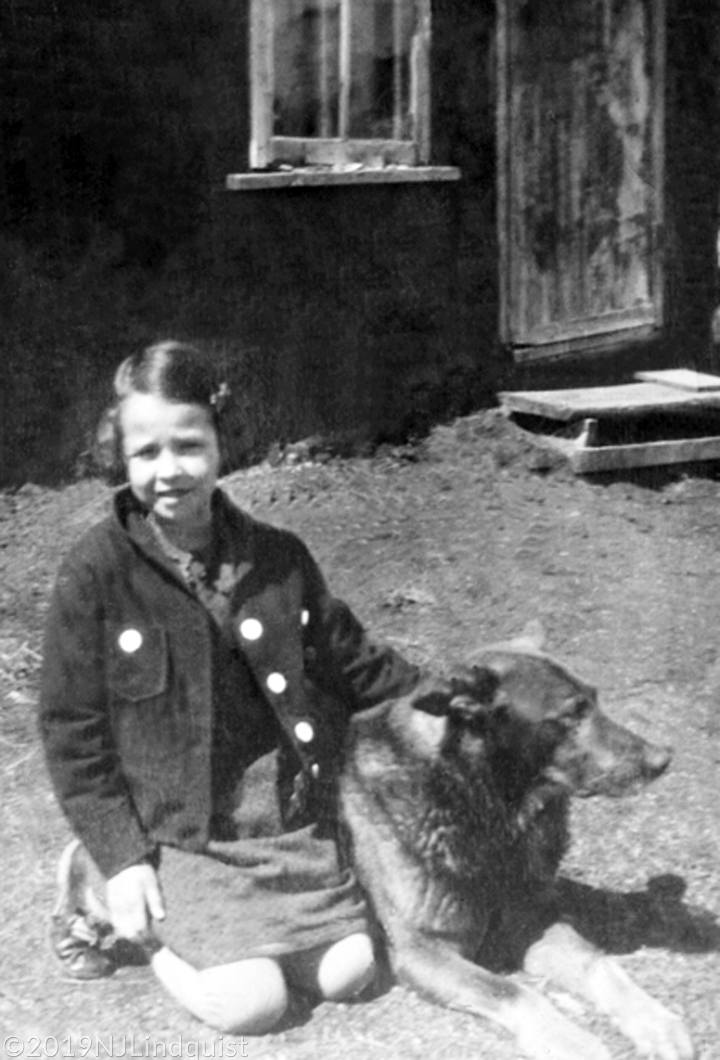 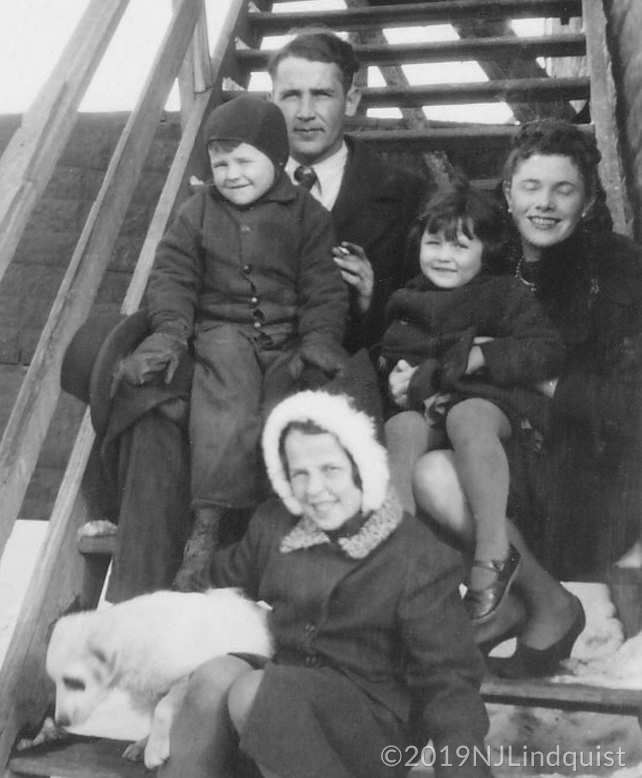 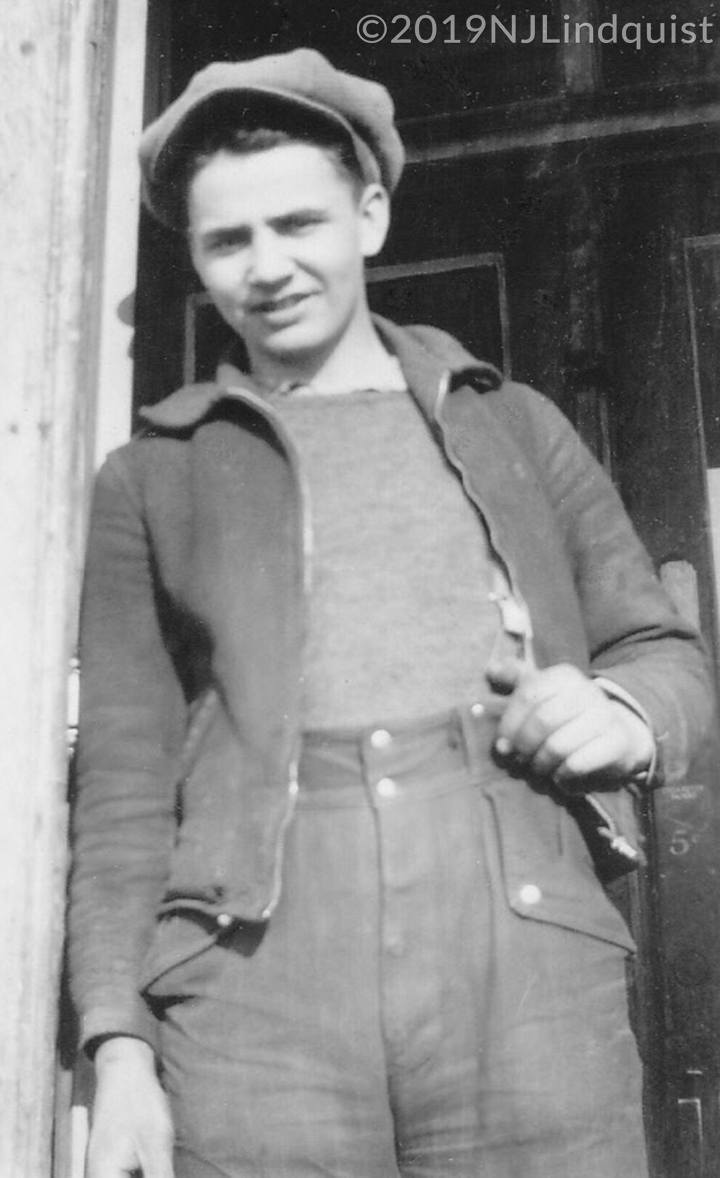 The Church and Community

The next thing I know for sure is that on April 6, 1941, Bob and Margaret officially became members of the United Church in Indian Head. 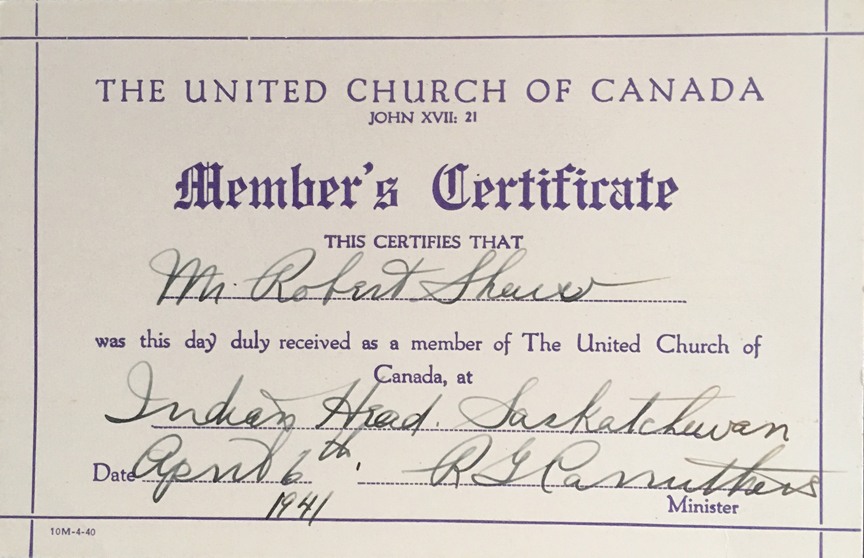 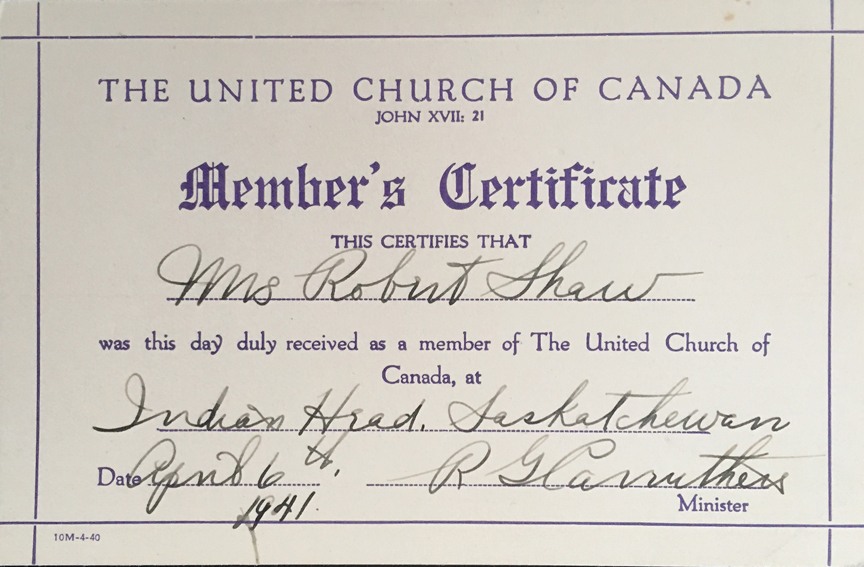 I assume that becoming members of the church meant that Bob and Margaret had decided they wanted to stay in Indian Head. Which makes sense, because they'd met and become friends with a number of people from the community. Since attending a church on Sunday mornings was the norm for many people in those days, they may well have met a lot of their friends through the church.

Some of the people they met there became lifelong friends. Cliff and Grace Horsman, Frank and Myrtle Douglas, Evelyn and Harvey Krug, Otis and Marg Holden, Jack and Velma Hall, Jack and Isabel MacDougall, and Mrs. MacDougall (I assume she was Jack's mother) are a few of the people whose names I still remember.

On July 24, 1941, Margaret’s dad, Bruce MacDonald, became ill and died after nine days in a hospital in Russell, Manitoba. He was only 55.

I was never sure what had caused his death—Mom seemed to think it was pneumonia or a heart attack—so a few years ago, I paid for a copy of the death certificate. The cause of death was listed as peritonitis caused by a perforated duodenal ulcer complicated by organic heart disease. The doctors had operated to try to deal with the ulcer, but to no avail.

The photo near the top of the page is the last one Margaret took of her dad.

Margaret was devastated by her father’s untimely death. Over the years, she often spoke of him, and it was clear to me that she and her dad had been close. His death was one of the saddest times in her life.

Bob went to Rossburn for the funeral with her, and left Margaret with her family for two weeks while he went back to Indian Head to work.

Her mother, Alice, who was still in her mid-forties, was left with three children aged 11, 7, and 5. Alice's sisters, as well as her older sons (Jim, Hughie, and Mervin), helped out as much as they were able, and Bob and Margaret would also have helped if they were able.

The next picture I have shows Margaret and Bob standing in a doorway which I assume led to an apartment above a store. The photos are dated May, 1942.

From a letter Jennie Shaw, Bob's mother, wrote to a relative in Ireland in 1948, it's apparent that Bob had managed to open his own butcher shop in Indian Head. I'm assuming these pictures were taken on the day that happened. 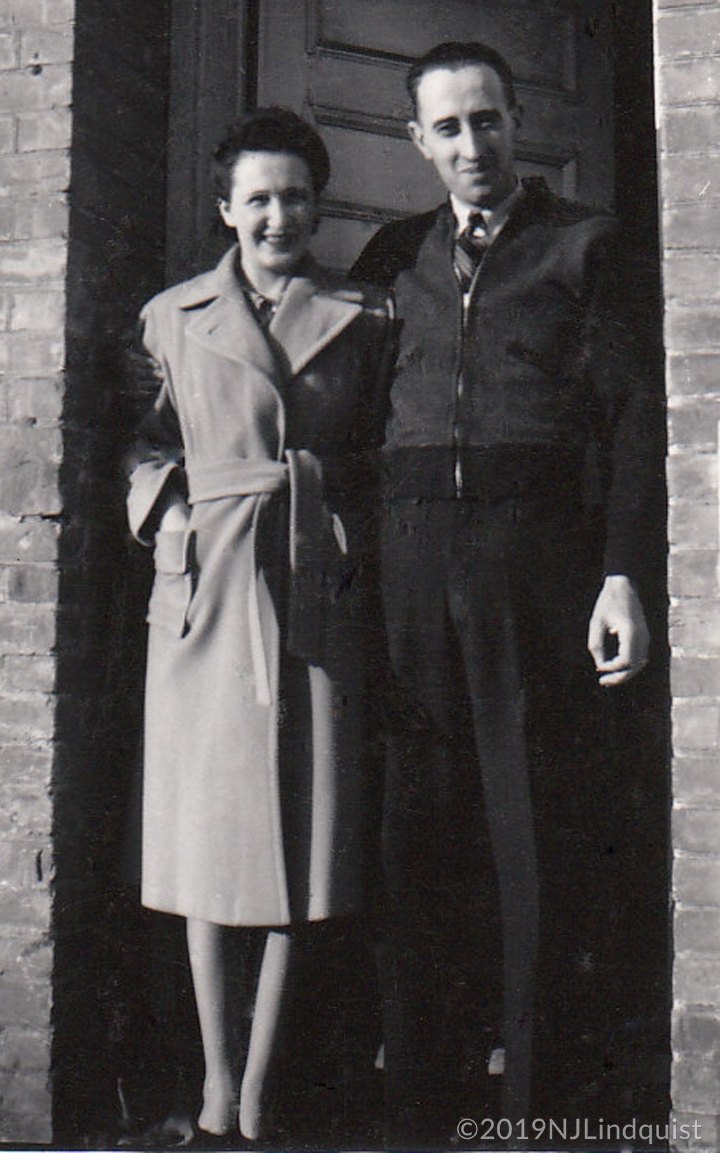 Bob might have rented the store space, but I'm guessing he bought the building and probably rented out the apartment above. In spite of his lack of education and introversion, he had a surprising ability to make friends with bank managers and other influential people. So I expect he could have convinced someone to give him a mortgage if he could manage the down payment. 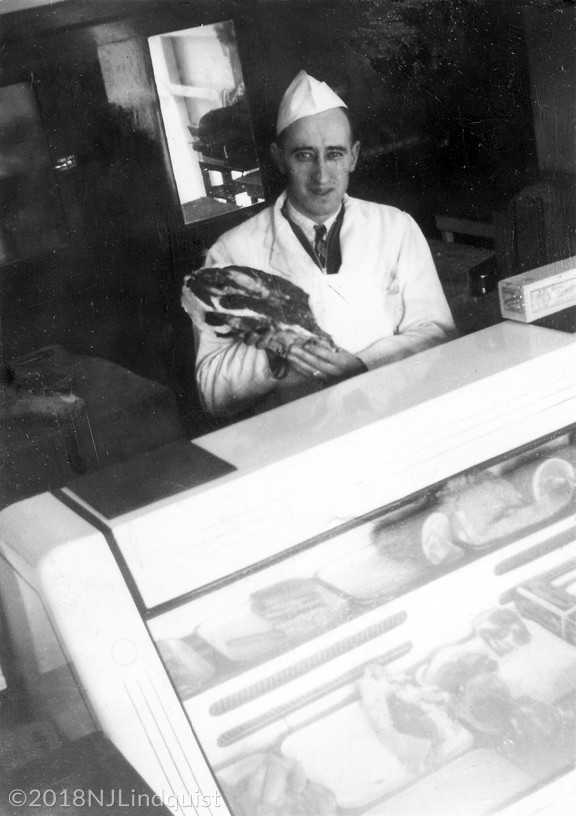 Bob behind the counter in his butcher shop. 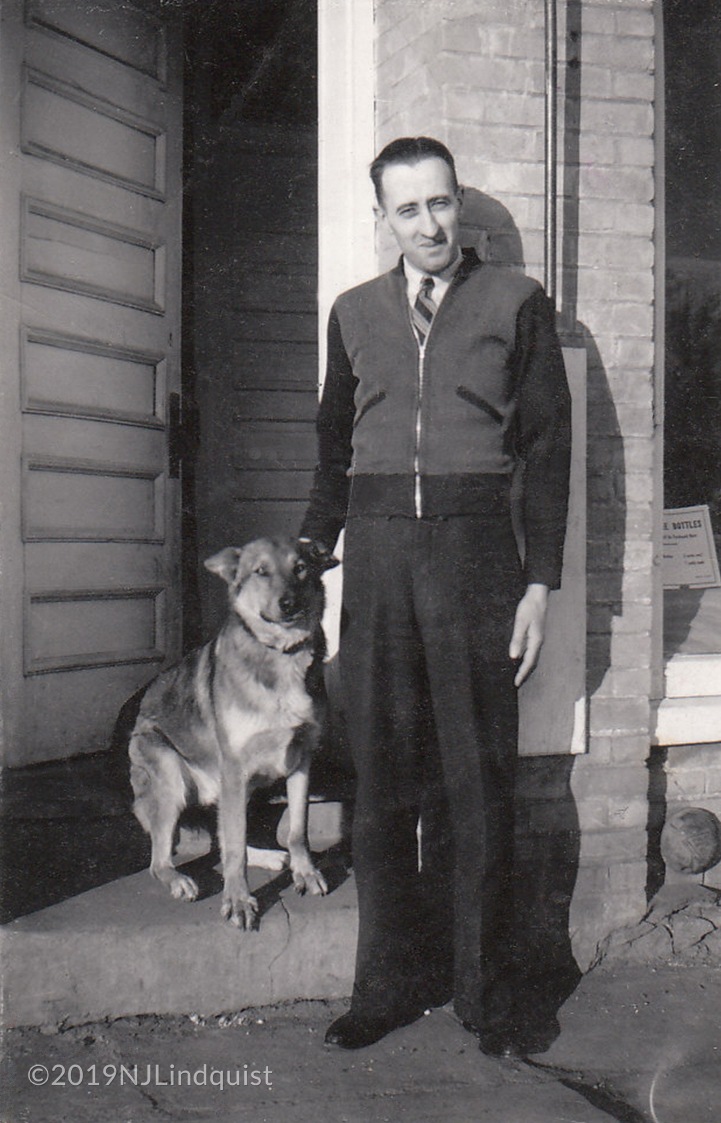 Of course, Bozo was there, too.

I examined some of the older buildings on Grand Avenue in Indian Head a few years ago, and found several that could be the building pictured here. Each had brick walls with stores on the ground level and inset doors leading to apartments on the second stories.

From the smiles on their faces in the picture above, it’s apparent that Bob and Margaret were very happy.

In 1942, Margaret would have been 31 and Bob 30. My guess—and this is only a guess—is that up to the time these pictures were taken, they were eager to start a family but not quite ready. The fact that Bob now had his own business, and presumably a certain measure of security, would have given them that extra bit of assurance that they could manage.

Unfortunately, while many things went well for them, their next years weren't all rosy.

Like Bob and Margaret, I expect most of us start out a new venture with certain expectations and a hope that all will go well. But, for many, there's a bump in the road. Or maybe a sharp detour. Can you think of anything in your life or your ancestors' lives that was an unexpected bump in the road with life-changing consequences?