“No journey is too great if you find what you seek.”

Since Dad rarely spoke about his background, almost everything I know about it was told to me by my mother (and inevitably coloured by her perspective), picked up through my own observations, or overheard when members of Dad’s family were talking.

In addition, the Shaw family had a reunion in Ireland in 2014, which resulted in a booklet that included some very helpful genealogical information. (Many thanks to Winston Shaw, who edited and compiled the book!) 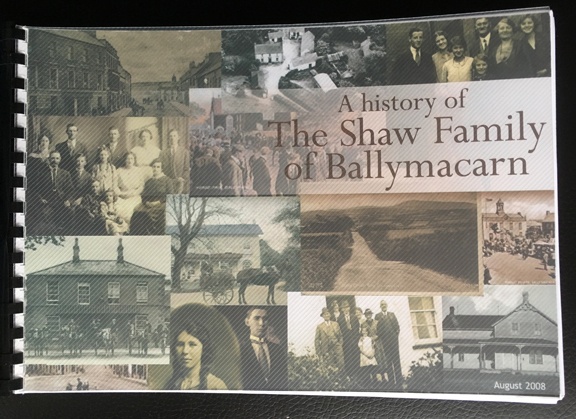 As I've said before, I would love to have any new information that people can give me.

As you might guess from the title of the above book, my dad was a member of the Shaw family who lived in Ballymacarn, Northern Ireland. Since "bally" is short for the Gaelic word "baile na" meaning roughly "place of" and "carn" is "a cairn," I'd have guessed there was a cairn of some kind in the area when it was first settled. But it isn't remotely that simple. According to The Northern Ireland Place-Name Project, Ballymacarn first appeared as Ballymckarney in 1616. It clearly contains a surname, and the surname Mac Cearnaigh is attested historically, and later McKearney.

Back in the late 1500s and early 1600s, when England was still fighting Spain, there was a fear (with good cause) that the Catholics in Ireland would support the Spanish and give them a "back door" into England. Because of that, some of the Irish were chased out of the country (mostly to the United States) and Protestants from Scotland and England were encouraged to move in.

The records of the Ballymahinch First Presbyterian Church support the idea that the Shaws moved to County Down during this time.

It's believed that the Shaw family likely came from the Scottish Lowlands to Hugh Montgomery's land because the area they settled in included in the parcel or acres that were given to him, but that's all I know. There were other "highland" Scots that weren't connected.

By the way, the name Shaw is apparently an anglicized form of Mac Sithich, which means "son of the wolf." There are still Shaws in County Down and Count Antrim, but many more all over the world.

For anyone who enjoys reading about history, I found this fascinating account of the settling of Country Down.

The curious thing is that so far I haven't discovered names of any Shaws from before they arrived in Ireland. Of course, I'm still hopeful.

The earliest members of Dad's family who I know of are William and Sarah Shaw. William was born in 1740 in County Down, and he married Sarah McCay, who was also from there. They had nine children, but the one who was in my dad's lineage was the second youngest, James.

James Shaw was born in 1780 in Dromara, Country Down, and he married Mary (Maggie) Cray (Gray?), who was also from there. They had six children.

The records at First Dromara Presbyterian Church show that their oldest son, James Shaw, married Margaret Hanna there in September, 1830. That's the first record of the Shaw family in the Ballymacarn area, which was also in Country Down.

It's important to note that the 1800s were very difficult for those in Ireland, with the Irish Potato Famine creating chaos in the mid-part of that century. Farming had always been a struggle, but in the middle of that century it became really bad. According to Britannica.com, as many as one million people in Ireland died from starvation or famine-related diseases. Up to two million people emigrated. By 1921, when Ireland was given independence, the population was half of what it had been in the early 1840s.

As far as we know, while some of the Shaws no doubt had other jobs, most of them were tenant farmers who leased small acreages from their landlords. James Shaw's occupation was apparently that of a tailor, which would be low on the pay scale, but in 1834 James and Margaret also leased half an acre of land.

Their second son, Robert Shaw, was born in 1810. When he was 37, he married 22-year-old Margaret Brown, whose father was called George Brown. George's occupation was listed as a weaver and labourer and Margaret was a dressmaker. Other than that, I have no information about the Brown family at this time, not even Margaret's mother's name. But although he never met them, they were my father's grandparents.

Since 1847 was right in the middle of the Irish Potato Famine, and Robert was a farmer, I have no idea how they managed to not only survive but feed seven children. But they did. Likely through a lot of hard work. Also, I discovered in the book I mentioned above that their landowners weren't like some, who evicted their tenants; instead, the Ker family tried to help out by selling their art collection, including Rembrandts and Van Dycks. 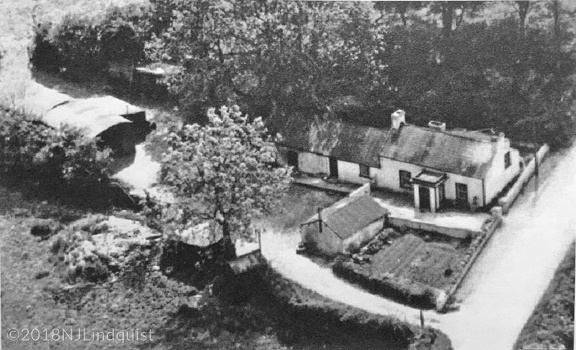 The farm where Robert and Margaret Shaw raised their family.

However, tragedy struck in 1875 when Robert Shaw died at the age of 65, leaving Margaret with five children ages 5 to 15.

The oldest daughter, Mary, had married three years earlier, and George, while still young, had been apprenticed to a watchmaker. George worked for several years in Belfast, Ireland, one year in Glasgow, Scotland, and then immigrated to Canada and resided at Mitchell, Ontario for a short time.

After his father’s death, George, who would have been in his early twenties, returned to Ireland to help his mother with the farm.

George Brown's mother Margaret would have been 50 when her husband died, and it wasn't usual for a woman to be given the lease on land. However, their landlord changed the lease on their farm to Margaret's name, so she was able to keep their lands and home. 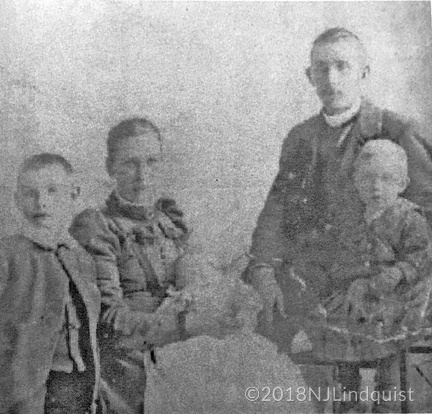 Andrew Shaw, wife Margaret, and three of their children.

The desire to return to Canada must have been strong because in 1883, when he was 26, George Brown Shaw chose to leave his home and family one more and start over again in Canada.

After her second son's death from pneumonia in 1886 at the age of 25, Margaret was left with only her youngest son, Andrew, age 19, to rely on.

In 1890, when Andrew was 23, he married Margaret Reid and they lived with his mother. Three years later, on April 14, 1893, Margaret legally turned over the lease for the farm to Andrew.

She died four years later at the age of 72 and Andrew and his family remained on the farm.

The older girls married local men, but several of them went to Belfast to become servants in homes or work in the linen mills, and met their future husbands there. And gradually, along with many other people from Ireland, including some of their cousins, the families spread over the world (the United States, Australia, New Zealand, South Africa, Canada, etc.) so that many of them lost their connection to the rest of the Shaw family.

The only name I recall from my childhood is Lyons. I know my dad had a friend named Alec or Alex Lyons and since Margaret and Joseph Lyons had a son called Alexander, I think that might have been him.

Manitoba had become a province of Canada in 1870, although the boundaries then were much smaller than what they later became.

To encourage agricultural settlement, the Government of Canada passed the Dominion Lands Act, assented to on April 14, 1872. This act created what is now known as the Homestead Act. Under this legislation a person was entitled to claim, for a $10.00 fee, a quarter section (160 acres) on even numbered sections subject to specified conditions. The standard requirements were that the homesteader would reside on the land claimed for at least six months of the year, would establish a permanent residence and would break 40 acres over three years. A second adjacent quarter costing $2.00 or $2.50 per acre, could be reserved as a pre-emption, for a total of a half section or 320 acres. Thus many of the original farms in Manitoba were settled as Homesteads and were either 160 or 320 acres in size. Much of what is now Southwest Manitoba was settled between 1878 and 1882.

When George Brown Shaw returned to Canada in 1883, I believe it was because of the Homestead Act. He wanted to build a home and start a family in a new country where he would own his own farm and not have to lease it. And I expect he wanted the freedom to choose his own path.

George was given a homestead near Birtle, Manitoba, and off he went to begin his new life.

1. George Brown Shaw used his full name as his signature. Perhaps it was to remember his grandfather. Do you have a name that reminds you of someone?

2. You may have noticed that the same names seem to be repeated over and over and over.... In fact, when a baby died very young, you even find that name reused by the family for a later child. Did you/would you name your children after relatives?