“Do not diminish who you are. Your gender, your heritage, your identity. That's what makes you unique."

I realize this part of my story might be of interest to only a small number of people, so feel free to skip it. My focus isn't on finding out all the details back to forever, but on learning something about the family members who came to Canada and how their stories may have impacted my parents' lives, and therefore, even though I was adopted, my life.

I also know that my mother would have been fascinated by this, and that there will be others who, like me, find history and understanding people's action fascinating. A few of my readers might even know more about some of the people or their stories, and I hope they'll let me know.

My mother always told me that some of her mother's ancestors came from France, and from what I've been able to learn through the Internet and from other Agnew descendants, she was likely right. The Agnews seem to have had two origins, one of them Celtic and one of them from some of the Normans who came to England with William the Conqueror and later moved to Ireland before settling in an area on the west coast of Scotland in an area known as Wigtownshire. The name "Agnew" likely came from des Aigneus.

A while ago, I "met" a woman on Ancestry.ca whose grandfather was my mother's uncle. That was weird, because I didn't know my mother had any uncles!

She helped me track my mother's branch of the family back to a Hugh Agnew, born in 1791 in Newry Down, Ireland, who married Isabella Johnson. Isabella was also from Ireland, and their first two children were born there, but the third, Robert, was born in Stoneykirk, Wigtownshire, Scotland, in 1819. They seem to have remained there. According to a census in 1851, Hugh was a surgeon and a farmer of 50 acres. Isabella, died on March 29, 1863, in Sandhead Village, Stoneykirk, Wigtownshire, and Hugh died there on March 15, 1872.

Hugh and Isabella had eight children. Robert, who was their fourth child and eldest son, married another Isabella—Isabella Patterson Walker—who was also from Wigtown. Sadly, Isabella died the same year as Robert's mother (1863), leaving Robert with eight children ages 3 to 18. There is no indication he remarried. A census in 1871, when Robert would have been 52, listed him as an agricultural labourer.

Robert's second son, James Agnew, would have been 13 when his mother died. Some years later, both Robert and James emigrated to Canada (either 1872 or 1875). It's unclear if James went to Canada and then returned to Scotland to marry or if the arrival date is wrong, but in any case, James (age 23) and Margaret (Maggie) Shaw (age 20) were married in Wigtownshire, Scotland in 1875 and left very soon after that for Canada. Robert, who was then 56, likely went with them.

I traced Maggie's family back to a Samuel Shaw, who was born in County Down, Northern Ireland, in 1796.

I don't know if there was a connection to my father, members of whose Shaw family lived in Ballymacarn (which is in County Down) from the early 1800's until now. There could well be a distant connection.

Anyway, in 1826, when Samuel Shaw was 30, he married Isabella Plunkett, age 30, in County Down. (Yes, Isabella seems to have been a very popular name!!!!) She was also 30, and they were married in County Down although Isabella's parents were Robert Plunkett and Jane McKinzie, from Glasgow.

Sadly, Samuel died in 1834, at the age of 38, leaving a pregnant Isabella with a six-year-old daughter and a two-year-old son, Andrew.

Andrew and Agnes had six children, the eldest of whom was Margaret (Maggie) Shaw. Judging by where their children were born, they seem to have moved around Scotland a bit, including Ayrshire, Glasglow, Stewarton, Tobermory, Morvern, and back to Wigtownshire.

My mother had this scrap of the marriage registry for James and Maggie in a small box of keepsakes.

Shortly after that, Maggie and James, along with James's dad Robert and Maggie's parents, Andrew and Agnes Shaw, her younger siblings (four brothers and one sister), along with Andrew's mother, Isabella, emigrated to Canada. I'm not sure they all came on the same boat, but the Shaw family came on the S. S. Canadian, which went to Quebec City. They all ended up in Lanark, Ontario (west of Ottawa), which had a lot of Scottish immigrants and was known for lumbering and producing textiles.

Not long after Hugh was born, the family moved to Alexander, Manitoba, just west of Brandon, where the CPR railroad ended at that time. (The Canadian government was building the railroad across Canada to Vancouver.) James worked as a foreman, laying track for the railroad.

Homesteading in the Northwest Territories

At some point, James had applied for a homestead, and in 1885, the family moved to the land they've been given, which was north of Wapella, Saskatchewan. Maggie's parents and several of her brothers also homesteaded in that area. Wapella is now in southeastern Saskatchewan, but since Saskatchewan didn’t become a province until 1905, it was then called Assiniboine East, Northwest Territories.

They were likely able to take the railroad to Wapella, but they would have used Red River carts to get to their homestead. A granddaughter of the eldest son (James) told me that even the youngest of the children travelled in a Red River cart, which was essentially a wooden cart with two very large wheels. The cart was a rectangle which might have built-up sides, and could carry a pretty heavy load. Two oxen or horses could pull it. 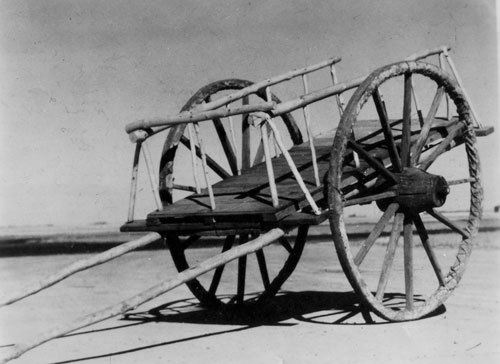 Not long after they moved to their homestead (May, 1886), Maggie gave birth to another son, David.

Unfortunately, James was unable to meet the requirements of the Homestead Act and after three years, they lost the farm.

The Canadian Homestead Act gave 160 acres for free to any male farmer who agreed to cultivate at least 40 acres and to build a permanent dwelling within three years.

I wonder if—while continuing to work for the C. P. R. Railroad—James wasn't able to get a permanent dwelling built, or if he wasn't able to cultivate the land? Which leads me to wonder where they lived during this time and how Maggie managed to look after all those children and the household?

After leaving the homestead, they stayed in the Wapella area. I'm guessing they were helped by Maggie's family. 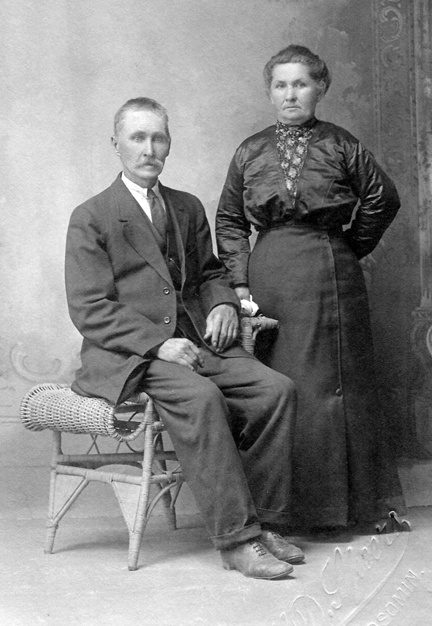 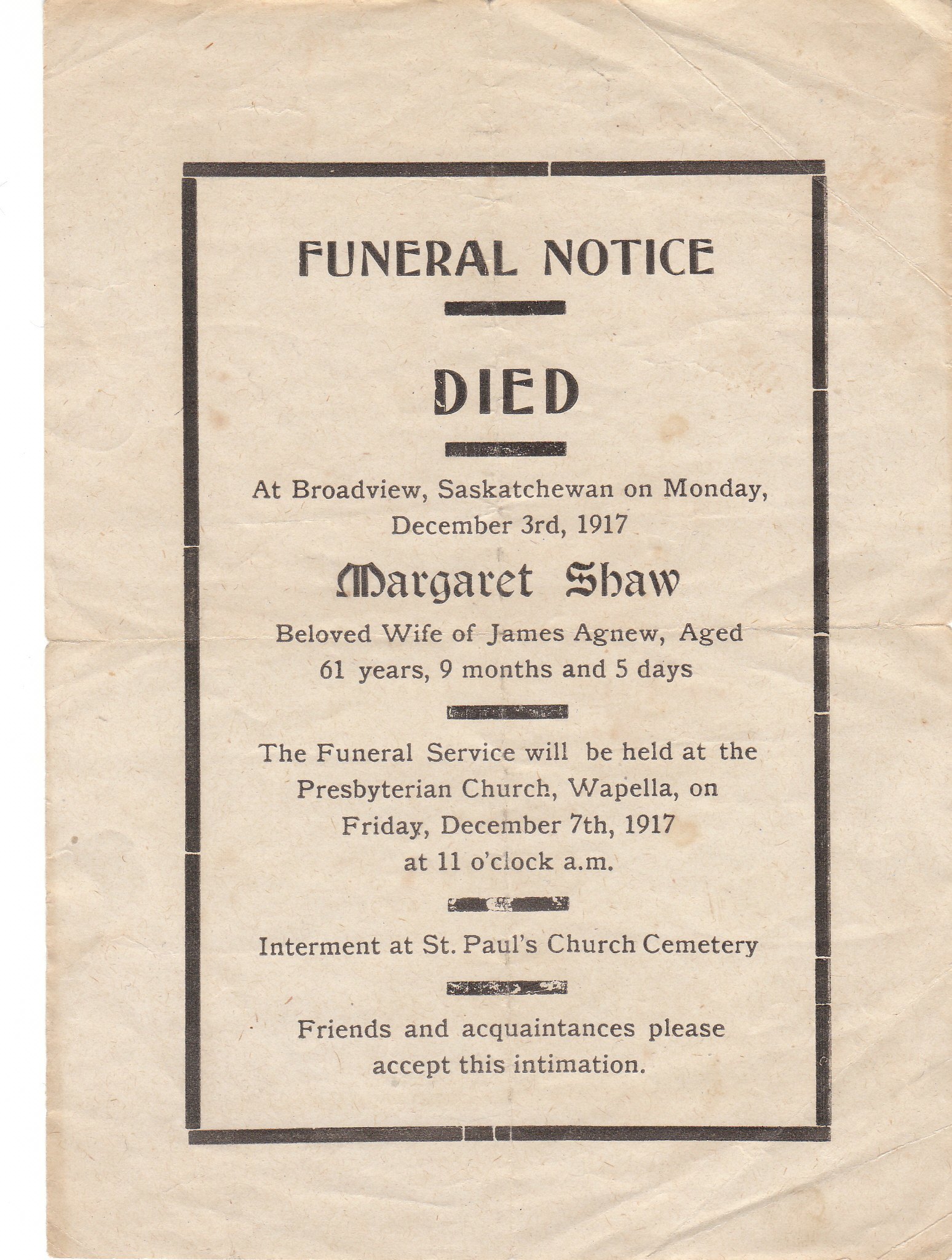 My mother also had this notice with her keepsakes.

Margaret (Maggie) Agnew died in Wapella in 1917 from heart problems. She was 62.

Her death certificate was signed by Samuel Shaw, her brother, who was three years younger and had the homestead that was next to theirs.

Both James and Maggie were buried in St. Paul's Cemetery in Wapella.

I Can't Even Imagine!

Looking at the big picture from a woman's perspective, within the space of 19 years, Maggie Shaw got married; sailed across the Atlantic Ocean to Quebec City; travelled (likely by railway) to Lanark, Ontario, gave birth to a son who died; and moved (by railway) with two young children to Alexander, Manitoba, where she gave birth to two more children. From there, with four children under the age of eight, Maggie moved to a homestead in Saskatchewan where she then gave birth to six more children!

I don't know about you, but having moved across country (Regina to Mississauga, by airplane, staying in hotels until our furniture arrived) with four children about the same ages of Maggie's four, I can't even begin to imagine what it was like for her. All those births and all that moving! And since they were homesteading, my guess is they had a crowded, rudimentary home with barely any furniture for much of the time. Or they might have lived with family who were also homesteading.

James and Maggie Agnew were my mother's grandparents. Alice May, their youngest daughter, was my mother's mother. Unfortunately, I have no pictures of her or her siblings when they were young. The earliest picture I have of my grandmother is one when my mother was born, which I'll post in my next blog.

Strangely enough, even though she had all those aunts and uncles and cousins, the only members of my mother's extended family that I knew were my grandmother and two of her sisters and their husbands, Aunt Ettie and Uncle Bert and Aunt Maudie and Uncle Mac. I remember hearing my parents talking about a “Mamie” but I don’t remember meeting her. However, she was married to my grandmother's brother David.

What I think happened was that most of Alice's brothers and sisters moved away from Saskatchewan, as did Alice herself. Some went to the United States (Rhode Island and California); at least one moved to British Columbia; and only one seems to have stayed in Saskatchewan. Also, many of them died before I was born or when I was very young.

Plus, in those days, it wasn’t as easy to keep in touch as it is today. Perhaps my grandmother wrote letters, and my mother might have to, for a while.

Anyway, I'll just mention here that Aunt Ettie was married to Bert Hawke, who started out as a newspaper editor in Broadview, Saskatchewan, but lived in Winnipeg for a time, then Modesto, California, and then Winnipeg. Their daughter Leslie was a few years younger than Mom, but the two of them kept up their friendship all their lives.

Aunt Maudie married Mac McTaggart, who worked for the railroad as a telegrapher in various towns in Saskatchewan and Manitoba, including Carroll, Manitoba. I’m not sure what year they moved to Winnipeg, but they were there for as long as I can remember, and they also had a long-time boarder, Lorne McShane, who was treated as part of the family.

I find history fascinating and also frustrating. So many times, I want to fill in the spaces between the facts with the stories. Why did these people board a ship and leave their homes and everyone they knew for a strange country? What happened to James and Maggie's homestead? Why did they all move away? So many questions. And for those who lived more than 100 years ago, there are few answers.

If you have children, do they know about their ancestors?

Do you have family members whose stories should be preserved? If so, could you listen and write them down? Video or record them?