“Children are likely to live up to what you believe of them.”

After the revelation that September (see the previous post), our lives continued exactly as before. I never mentioned it and neither did my parents.

The only other excitement was that I had another trip to the dentist and another cavity filled.

I’m guessing we drove to either Brandon or Winnipeg for a few days around Christmas time, unless we stayed home because I was sick. According to my Baby Book, I was sick for my birthday, which is right after Christmas, so we “celebrated quietly.” Granny Shaw sent me a book, Aunt Margaret and Uncle Albert sent dress hangers, and others sent cards. Mom and Dad gave me a book, some candy and skates.

I find it strange that the Baby Book Mom had offered a place to write down presents for birthdays but not for Christmas since I'm pretty sure my Christmas presents were more interesting. Of course, since my birthday came so closely to Christmas, some of my presents were for both.

I'm not sure when, but somewhere between four and six—probably at Christmas—my parents gave me two dolls. One was Linda and the other was Debbie. For some reason, Debbie appears in very few pictures, but Linda is in a number of them. You might have noticed her in my last post. The two dolls were about the same size, but very different in that Debbie was soft and cuddly, and Linda was hard and not even remotely cuddly. But Linda could “walk.”

This picture was taken a few years later, but you can see both Linda and Debbie in it. 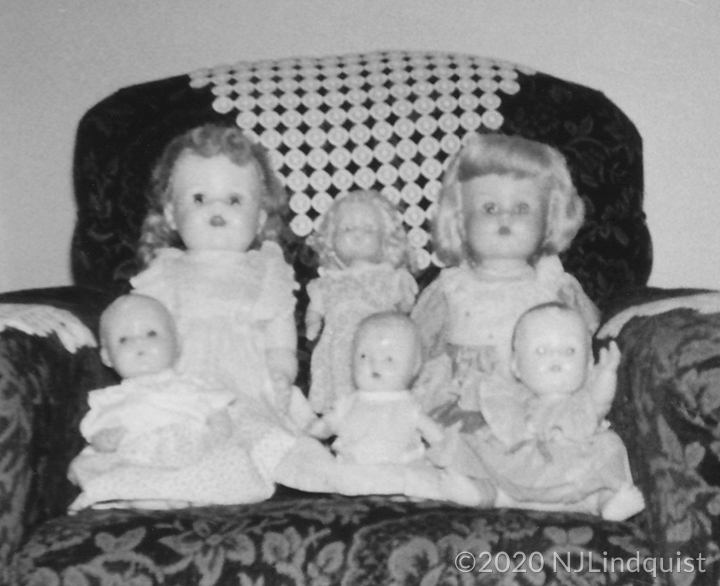 Linda was one of a line of dolls called Saucy Walkers and apparently they were all the rage back in the early 1950s. I can find numerous pictures of them on the Internet, but I can't find Debbie/Debby. I'm quite sure that was her name.

I have no idea what the names of the other dolls in this photo were, but Mom said I had a Judy, a Donna and a Mary. When I was nine or ten, I got a Tiny Tears doll which might be in the front row, but I'll tell you more about it later.

Anyway, apparently I still played with my dolls a lot. But I no longer carried them around completely- or half-undressed. Although shoes were hard to come by.

I loved playing in the snow 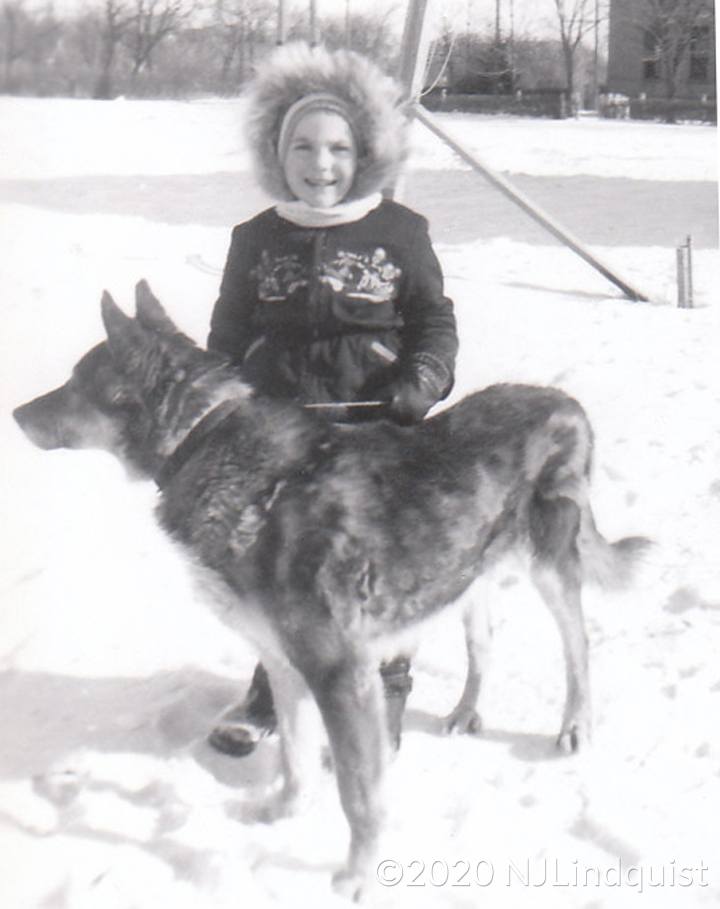 Me with my best friend, Bozo. 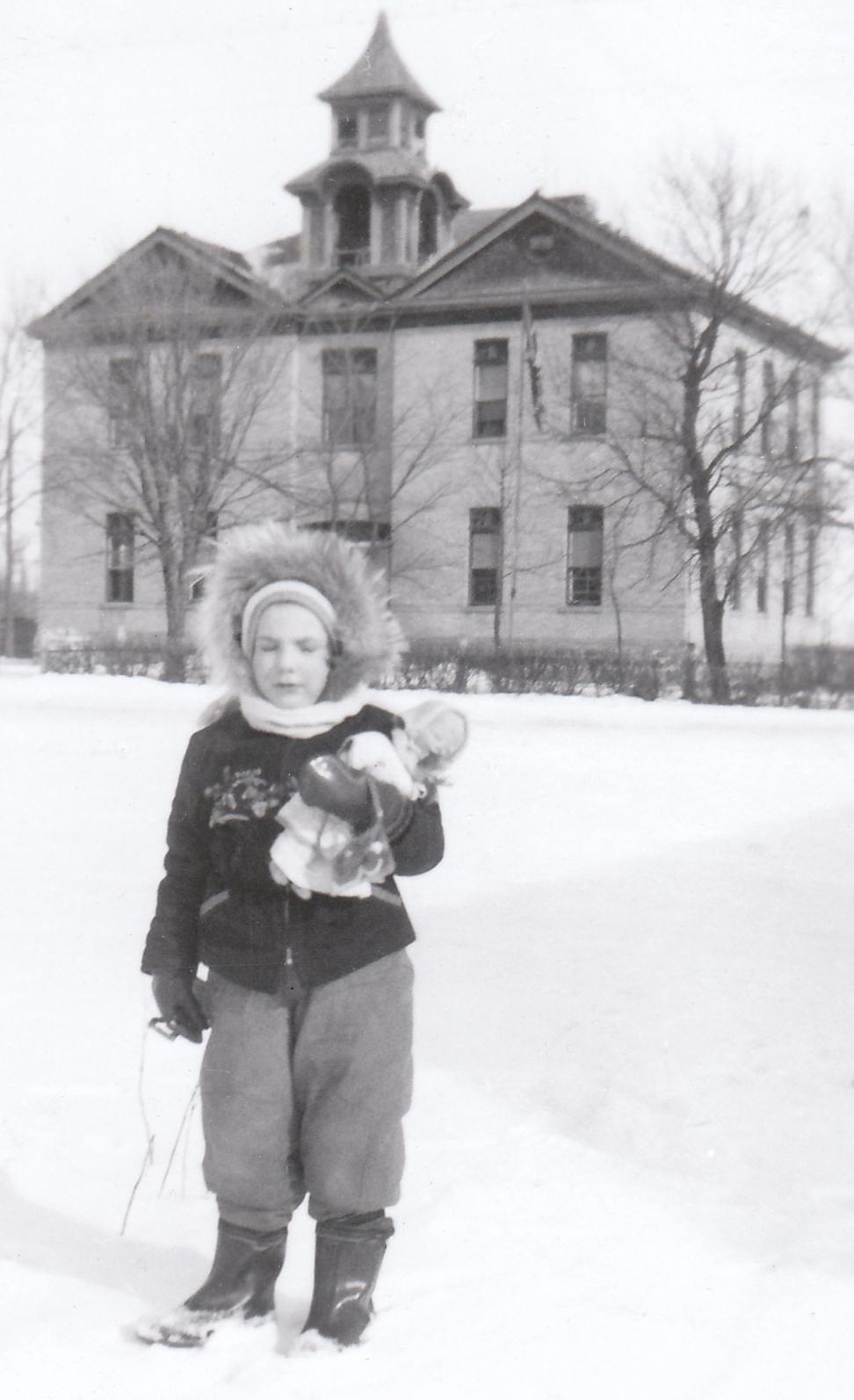 One of my smaller dolls got to go out in the snow. The cord I'm holding onto is from my sled. There's another picture of me with the sled, but since my eyes are shut in it, too, I didn't bother posting it. Hmm. I wonder if the sun was too bright that day?

We had a very large yard and there were some slanted places in it (not hills, but...) so I could sled and take my dolls for rides. My dad would pull me in the sled sometimes, and I might have had Bozo pull the sled, too.

We got a new car

A salesman somewhere had convinced my dad that it was best to change cars every couple of years instead of keeping one until it was old and ready for the junkyard.

Since it’s a very light colour, I’m going to guess it was yellow/gold, as evidenced by this link. My dad was never one for subtle colours—at least not for his cars. They do talk about men and their cars. I really think that for him it was some kind of status symbol. 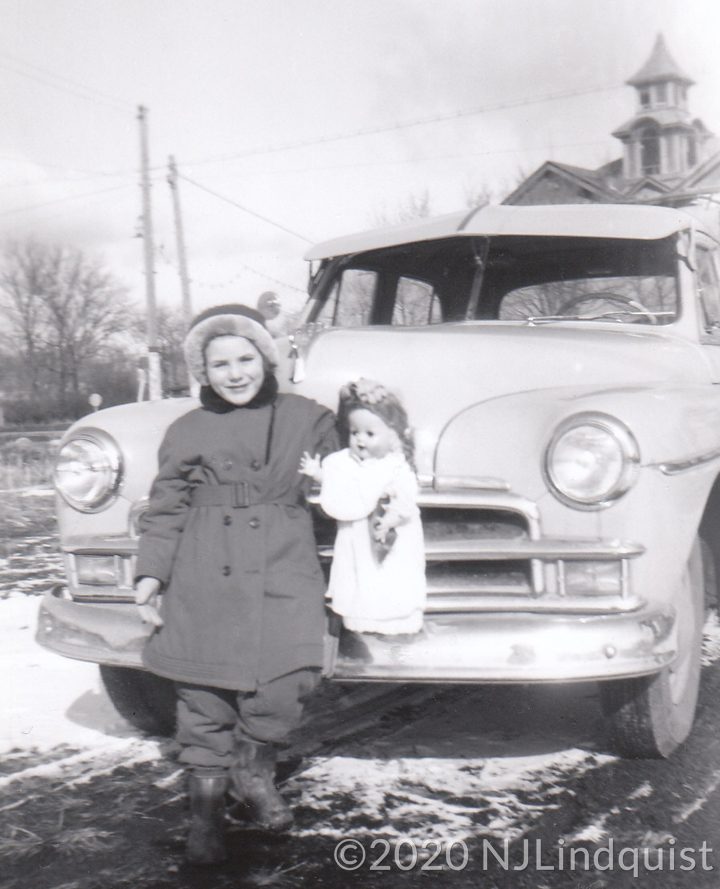 Five-year-old me with my doll Linda and our new car.

The above pictures and the one of me with my sled are the only ones I can find from the entire year. Seriously. I have no idea what happened. Were we short of cash, so there was no money for developing pictures? Too busy? Just didn't think of it? Had some films go astray? No idea. But I have to go by memories, not pictures.

My most vivid memory from the year when I was five

In those days, in a small prairie town, a child of five was allowed to go outside without their parents worrying. I often walked the couple of blocks to my dad’s store. And I sometimes watched him as he sold things and used his cash register. I found the cash register fascinating and he would let me use it and even make changes sometimes if the customer was a friend.

I also noticed that sometimes people asked my Dad to hold something for them and they'd pay a little each week until it was paid for. But sometimes people needed their purchase right away so they asked my dad to "charge" some or all of the cost. Usually, they said they didn't have enough money, but would get paid later in the month. My dad would write down the amount they owned in a little ivory-coloured pad that had a piece of carbon paper in it, so that he would have the original record and the buyer would have a copy. He did that when they bought and paid for something, too, but the ones that weren't paid in full went in a special folder.

I must have thought that was a good system, because one day in the summer, I went to the hotel, asked for a chocolate bar, and charged it to my dad.

The hotel was across the main street, kitty corner from our house, so I went past it all the time (although usually on the other side of the street). Sometimes we went to the hotel's restaurant for supper when it was a special occasion or when Mom hadn't been able to get supper ready because she was busy or we'd been out.

In the lobby, they had a counter with glass on the front, and inside the glass was a display of chocolate bars and other candy. Back then, the bars came in small and large, the small being five cents, and the large ten cents. My favourite kinds were Oh Henry! and Crispy Crunch, which was also my mother's favourite.

I'm not sure which bar I chose that day, but after the clerk put it on the counter and asked for my money, I told her to charge it to my dad and he would pay it. I think the clerk was surprised, and I vaguely recall a conversation she had with someone else, but I went home with the chocolate bar.

However, when Dad came home for supper, he didn't go to the kitchen and sit down at the table. Instead, he saw me and said, "What did you do with the chocolate bar?"

Turns out someone from the hotel had phoned him to let him know of my purchase.

Fortunately, I hadn’t eaten it. Likely because I knew I shouldn’t have done it.

I went to my room and got it.

I really, really didn't want to take it back. Not so much because I wanted to eat the bar, but because I was embarrassed because he thought I'd done something wrong.

I tried to make excuses, but he wasn't buying any of them.

He explained that when someone charged something at his store, it was because they really needed it and they really didn't have the money. He had to trust them to pay it later. He said that most people were trustworthy, but now and then someone didn't come back and pay and that made him sad.

But for me to go and get something I really didn't need and then charge it to him was like stealing. "You can't go and buy something and charge it to to someone else."

Nobody yelled or spanked me or anything, but my dad made me come with him, and we walked over to the hotel, where I quietly apologized to the clerk and watched as my dad gave back the chocolate bar. Then we went home and had supper.

Nothing was ever said about it again, although at bedtime that night, Mom did ask me what I'd been thinking. I didn't know what to say. It just seemed a good idea at the time.

However, it was a lesson I never forgot. Don't steal because that will make someone else sad, and don't do things behind my parents back because when they find out (and they will) they won't ignore it.

Looking back, I'm kind of impressed that it occurred to me to charge the bar. I mean, that was some nice lateral thinking. I'm also impressed that my dad handled it the way he did, making me go with him to return the bar. It would have been so easy for him to pay for it or take it back himself, or even eat it himself. But he felt he needed to make sure I knew not to do anything like that again, and that a moment's embarrassment was worth the lesson. What I learned was that my dad expected me to be a good, trustworthy person, and I wanted to live up to his expectation.

The quotation at the top of the page says that "Children are likely to live up to what you believe of them."

Were you fortunate enough to have at least one parent who expected the best from you, or did you have to struggle against parental expectations? 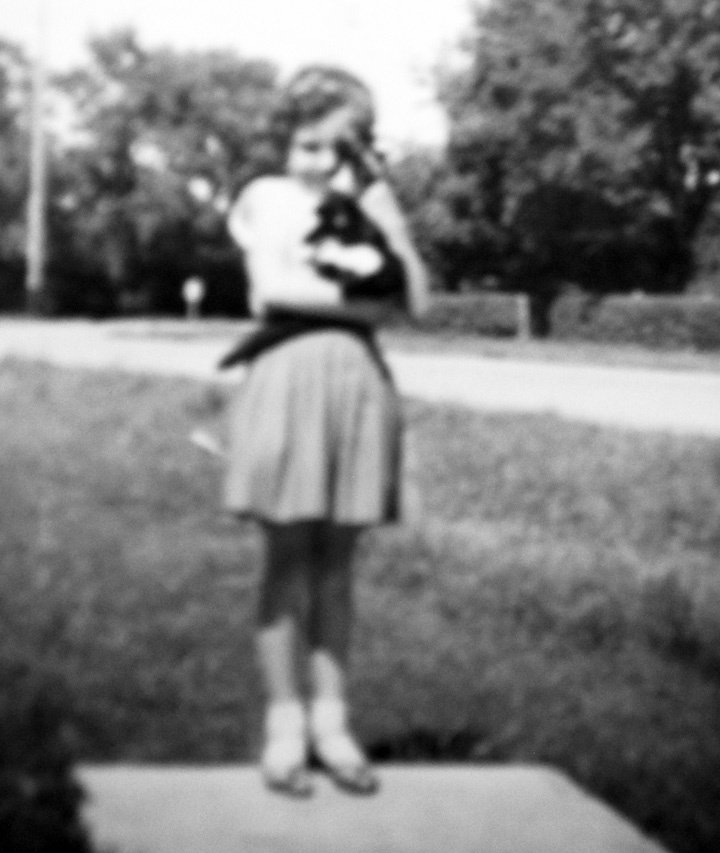