Thirty years ago today, I sat  in a hospital room in the palliative care section of Brandon Hospital watching as my father gently passed into a different world.

I flew from Toronto to Brandon for a week in the latter part of October. I soon realized that my mother was unable to cope and in denial most of the time. Because we lived so far apart, I hadn't realized that she was slipping into dementia and Dad must have been looking after her.

I flew back home to spend a week getting things organized for Les, our older two sons who were in high school, and our 3-month old puppy. Then I'd flown back with our younger boys, who were still being home-schooled.

While I was gone, Mom had called 911 for help when Dad had fallen, and they'd put him in the hospital. The cancer had gone into his spine and was now spreading all through him.  He had no pain other than an occasional headache, and all he needed was an aspirin or other low-key painkiller.

When I walked into the hospital after dropping the luggage and boys at the apartment, Dad was sitting in a recliner chair in a small sitting area. When he saw me, he immediately said, "Nancy, why am I here?"

I pulled a chair up in front of him and said, "It's the cancer, Dad. It's spread."

"Then I need to do something." He immediately closed his eyes and ask God to forgive him for his sins and to look after him, using language I knew came straight out of his mother's pleas to him, both spoken and written.

The change was apparent in the peaceful look on his face and the relaxed lines of his body. He shook his head, clearly puzzled. With the innocence of a child, he asked me, “Why did it take me so long to understand?”

I took him back to the ward he was in, with three other men, all younger than him. He soon fell asleep, and as I watched him, I thought of his mother, who I called Granny Shaw. She had died 34 years earlier. A devout follower of God, my grandmother prayed daily for each of her ten children and for their families. Many of them did make a commitment to God, but not her second youngest—my father—or his wife. But Dad had remembered her words.

Our younger two boys were 12 and 8, so I brought them with me to the hospital for a short visit a few times, but mostly I left them in the apartment doing their schoolwork, playing card games, or watching TV while I sat with Dad. Mom didn't mind having them there.

During the next ten days, George and Bernice, a couple who were younger than Mom and Dad but very close friends of theirs, drove Mom back and forth to the hospital, took her shopping as needed, kept her from getting too upset, and made sure she was eating. I spent most of my days at the hospital. When I found out Dad had fallen while trying to get out of bed in the night to go to the bathroom because he didn't realize his legs no longer worked, I hired a nurse to be with him nights.

When I was certain Dad was asleep for a bit, I went back to the apartment or did some necessary running around. A few years before, Dad had made sure I had power of attorney for both of them. Because Dad's files were completely up-to-date, it was easy for me to get copies of the power of attorney from his lawyer, close bank accounts, start to organize a funeral, write an obituary, and take care of everything so Mom had nothing to worry about. Their friend, George, was again invaluable in this process.

Other friends and relatives of Mom and Dad's also stopped by, brought meals for us, etc. One thing Mom and Dad never lacked for was genuine friends.

Since I'd never had the experience of being with someone when they died before, I had a lot of questions about it, but no idea who to ask. (I've never liked asking questions.) There was a small sitting room for visitors that I went to occasionally when the nurses were in Dad's room. One day, I found what appeared to be a textbook for nurses sitting on a table. I looked in the back for a glossary and found a section on what happened when someone dies. Just what I'd been wanting! It was quite helpful.

So when the nurse asked if we'd like them to move Dad into a private room, I knew the end was coming.

On the morning of November 27th, I came into his room and found him lying there, his head raised slightly, smiling. I asked why he was smiling and he said, "I'm just glad." That was our last conversation. Shortly after that, Dad went to sleep and he didn't wake up. On November 28th, as I sat by his bedside waiting for him to draw his last breath, I was filled with the sense of God’s presence, watching over both of us. What could have been a difficult time became an interlude of joy and peace that, as Jesus said, passed understanding. And, thankfully, when he died I recognized the signs and was able to calmly go and tell the nurse that he was gone.

My dad's older brothers taught him to smoke cigarettes "out behind the barn" when he was eight years old. When I was younger, he was smoking at least a pack a day (although never when he was around his mother). In his late 40s , he happened to be watching TV when a documentary came on about smoking and what it does to your lungs. He never touched another cigarette. Yes, he died from lung cancer, but it might have happened years earlier if he hadn't just happened to see that documentary.

Anyway, what I most want to say is that my dad was a really good dad who had limited education and limited opportunities, but always did his best to look after his family, including not only his wife and daughter but also his mother and other older relations. He was the one person I knew I could always rely on if I ever needed help, and he adored his four grandsons and they loved having him around. I can't even imagine how thrilled he'd be to meet his great grandchildren. But perhaps he's somewhere smiling down on them right now.

And, to end with some happy notes:

1. Two years earlier, on Oct 19, 1989, Dad was sitting in our family room with Mom and our whole family, watching the Bill Cosby Show. That episode was titled, "Theo's Gift," and it talked about dyslexia. My dad struggled his entire life with difficulty reading and writing, and had been called "stupid" more than once by a teacher. When he had to write a letter, he got Mom to do it. He read every day before he went to sleep, but very slowly. Mostly Reader's Digest, maybe a western or another fairly easy book. He also read the local weekly newspaper and sometimes the bigger daily one. Anyway, on the show, when they talked about the problem Theo had, my dad got to his feet and pointed at the screen. "That's me! That's what I have! The ending of words keep changing!" Finally, my dad received validation that there was a name for the condition he had, that it could affect anyone, and that it had nothing to do with how smart you were.

2. In the spring of 1991, my first book, Best of Friends, was first published (by Moody Press). Dad was so proud that I had written a book and even though it was a young adult novel, he read it more than once. I'm so glad he was around for that.

3. The only sport I ever saw Dad play was golf (which he played as often as he could). But the sport he most loved to watch was baseball. Sometimes he took me with him to Souris Cardinals' ballgames. And when I was younger we always watched the World Series together on our TV. (Usually featuring the Yankees, as I recall.) When Toronto got it's own team, he was thrilled and he quickly became a Jays fan. We took him to a few games when he was visiting.

On October 24th, 1992, during my first week in Brandon, and before they realized Dad needed to be in the hospital, we watched the Toronto Blue Jays in game 6 of the 1992 World Series. Mom had gone to the bedroom because she found most sports boring, but Dad and I watched every pitch, every strikeout, every hit.... And we celebrated together when the Jays won. I'm so glad we had that moment together.

4. I have to admit I'm not really a "griever." After I realized he was dead, I didn't shed any tears. I went back to the apartment and told Mom and George and Bernice, called Les, organized the funeral, sent the obituary to the places where Mom wanted it, did all the things you do...

Les and our older boys flew down. I had realized Mom couldn't be on her own, so we'd arranged for her to stay with her younger sister in Winnipeg for a few weeks and then fly down to stay with us for a while. Once we were back in Toronto, we got back into our usual lives again, with additional shopping and moving things around to turn our family room into a bedroom for Mom when she arrived right after Christmas.

5. Just before Christmas, one night I felt I had to write a story. It was about a man in a ward with three other men in the palliative care wing of a hospital. The story isn't about Dad or the actual men who were in the ward with him, but I have to admit that, being a writer, I did take quite a few notes when I was sitting there with not much to do. Anyway, I think I poured my emotions into the story. (It's called "Living on the Edge," it's kind of weird, and it's one of 7 stories in this book, which I published under a pseudonym.) I guess writers are funny people. Or maybe it's just me. But I think Dad would enjoy the story.

A Few Pictures. (Note, the one above was taken when dad was about 50.) 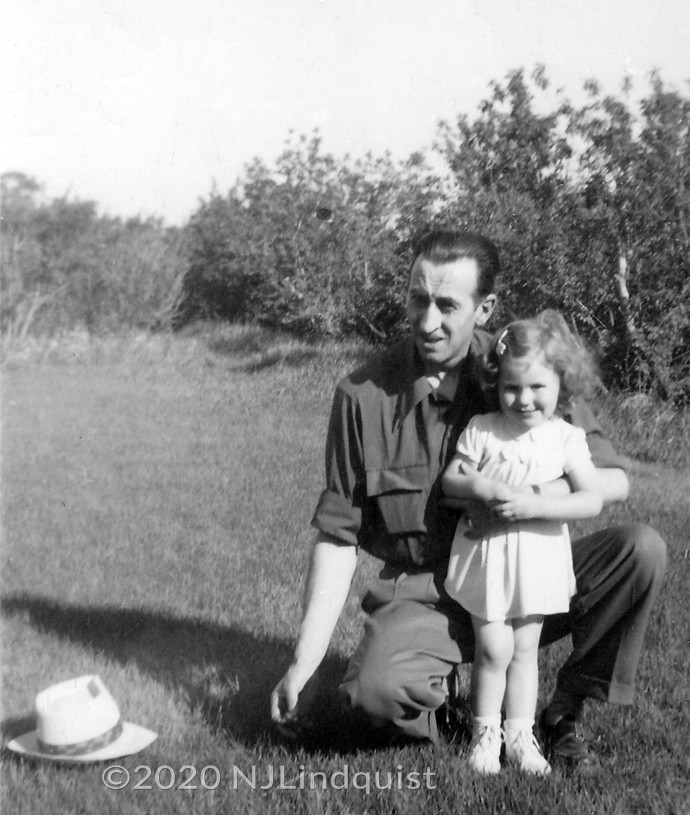 I Loved Being with My Dad. 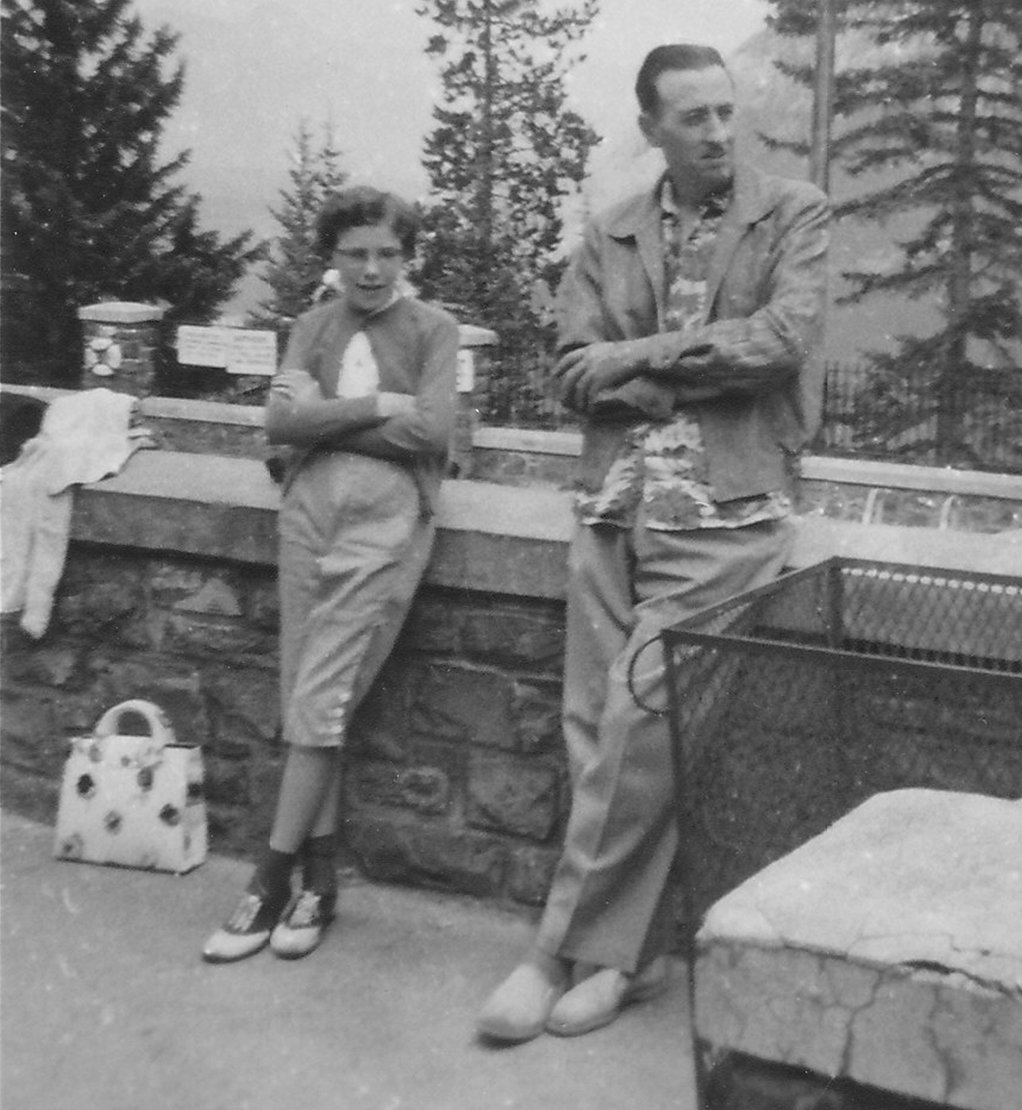 My Favourite Picture of Dad and Me. Taken While Visiting Banff. 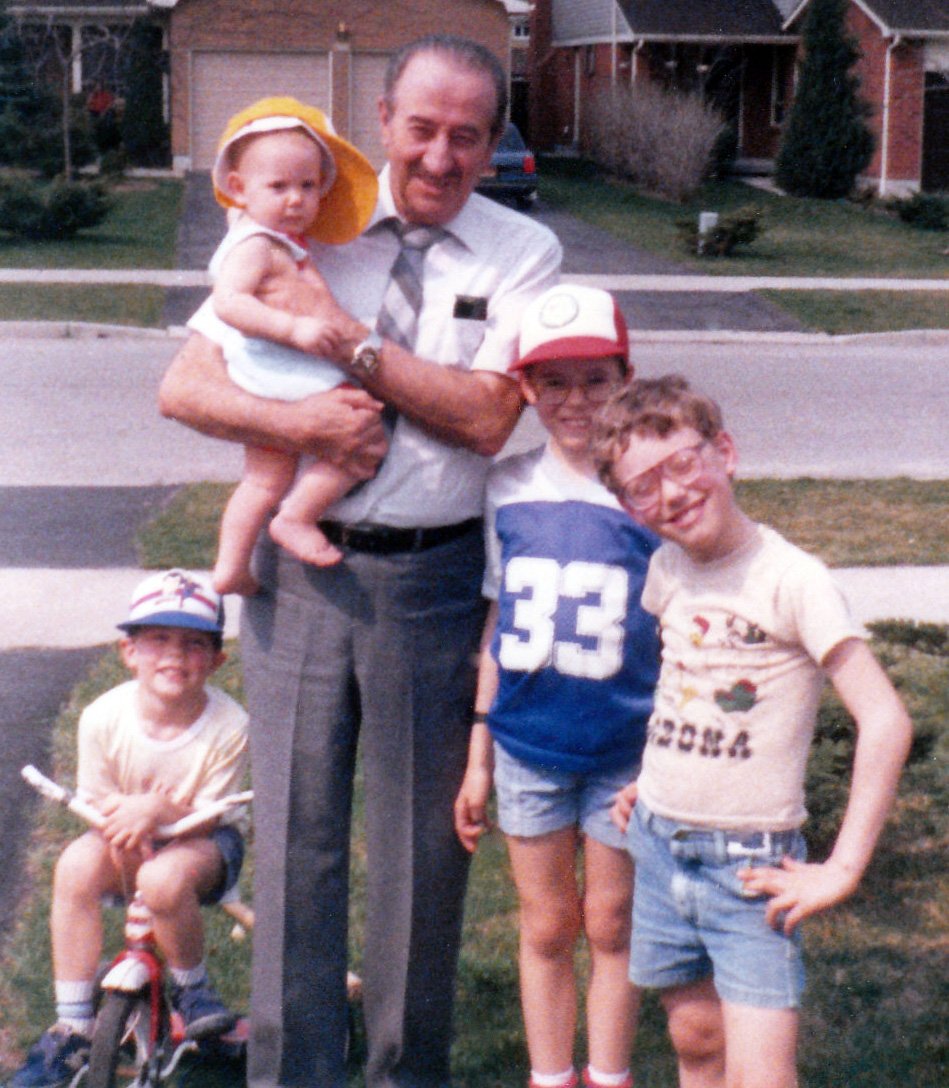 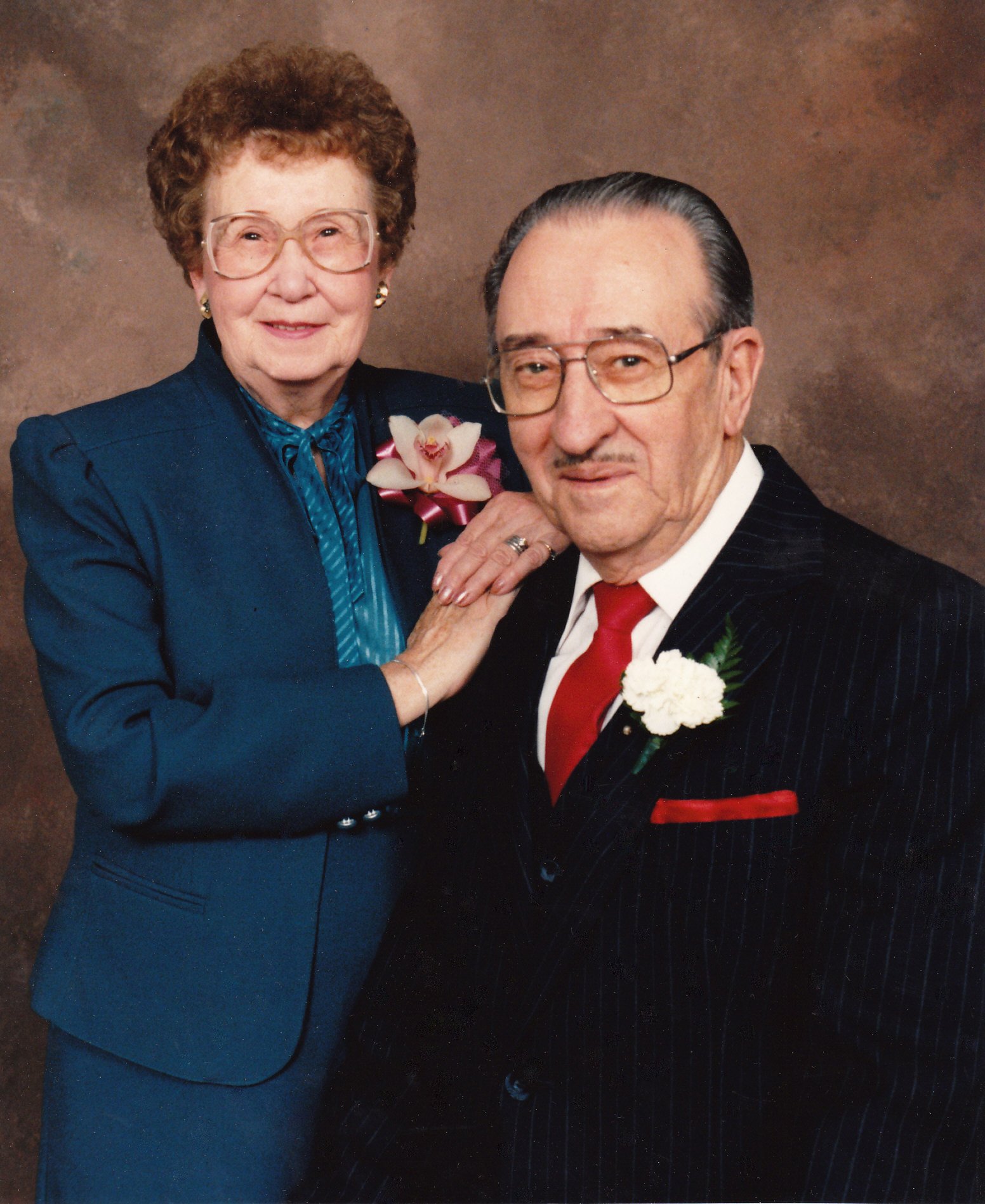 LoveChild 3: I Meet My New Parents