Winner of the 2009 Leslie K. Tarr Award as well as a number of individual The Word awards, author of eight books as well as ten technical manuals and more than 1,000 editorials, newspaper features, and columns, Fergus Ontario’s Ray Wiseman, like The Little Engine That Could, kept plugging away, overcoming obstacle after obstacle.

The son of an English Boer-war veteran and his third wife, Ray was born in England during the Depression. He was two when they returned to their farm home in Alberta, six when his father was hospitalized. His mother managed to raise her two sons and baby daughter on her own, but life was hard.

Young Ray loved making up stories. “I always wanted to write. I’d write short stories and stuff them in a drawer, then throw them away months or years later.” But school was difficult. “I failed grade two because I could not copy from the blackboard. I would transpose numbers and letters.” Years later, he learned about dyslexia, but back in those days, you simply coped. He left school after grade nine to get a job and help his mother.

While a teen, Ray and his family moved to London, Ontario where he worked in a radio shop. His boss recommended a correspondence course from Radio College of Canada. They were reluctant to take him, but Ray completed the 18-month course in 12 months.

Two years later, Ray met his future wife, Anna, in Woodstock, Ontario. Shortly after their marriage, they began an electronics business in Woodstock, but despite its success, Ray wanted more.

In his late twenties, Ray and Anna and their two young sons moved to Briercrest Bible College in Saskatchewan. While there, Ray wrote his first published piece, a letter to the editor.

Next, Ray pastored a church for two years, but finding it impossible to care for his growing family (now four sons) on the small salary, he took a job with the cable company in London, Ontario.

But in 1971, again feeling a call to full-time ministry, Ray and his family moved to Africa to work with Africa Evangelical Fellowship. They returned to Canada and the cable company in 1976.

Ray still felt restless. Most of all, he wanted the education he had missed. He earned a Bachelor of Arts degree from the University of Waterloo by taking correspondence courses. He also upgraded his Briercrest diploma to a degree. During this time, the writer within Ray began to re-emerge. “You do a lot of writing when studying this way and I honed my skills on essays.”

His new abilities didn’t go unnoticed. Rogers Engineering asked Ray to take over the technical writing and publications. “I didn’t have the confidence to ask for the job, but they came to me!” He wrote ten technical manuals.

Soon he was also writing and editing for Partners Magazine, published by Partners International.

Then Ray took a giant step. “One day I read a secular publication intended for seniors. It was so negative! I wrote a series of upbeat columns. They rejected them, but our local paper accepted them."

Ray continued writing weekly and monthly columns for the Guelph Mercury and The Wellington Advertiser for about 11 years. However, in 1993, Ray left Rogers to write and speak full-time.

Writing became the ministry Ray sought after. His desire, for both Christian and secular audiences, was “to communicate positive messages firmly grounded in a Christian world view.”

Ray gave special credit to three women for helping him become a writer.

I (N. J.) first met Ray at a God Uses Ink conference in Toronto back in the late 1980s. We seemed to have the same independent spirit and he was a few steps ahead of me. From then on, we always managed to have at least one meal together at the annual conferences we attended.

When I decided to republish my first book independently after getting the rights back, it was Ray who shared what he'd learned about publishing the books with Partners International. He also introduced me to his distributor, who accepted my books. We later both moved to a new distributor when the first one wasn't able to keep going in the competitive market. Ray and I, and sometimes other authors, did a number of book signings together, and on occasion I stayed with him and Anna and they stayed at our house.

I think part of what drew me to Ray was that my dad had also been dyslexic (which led at least one teacher to call him stupid), and he, too, had fought hard to have a successful life as a businessman even though both reading and writing were difficult for him. But, unlike my dad, I could talk to him about virtually anything and get a well-thought-out response.

The other non-writing thing we had in common was that we each had four sons (which makes for a lively family!) His sons were older than mine, but we always checked on how each others' family members were doing. And Ray always updated me on how the young woman who had become his and Anna's "adopted" daughter was doing, too.

Ray and I were both founding members of The Word Guild, which took over the God Uses Ink Conference in the fall of 2001, and eventually changed the conference's name to Write! Canada. Ray was a member of the first Board, and he soon became a speaker and mentor at the annual conferences. We were two of a small group of writers and editors who made the conference a priority each year. Anna would often come over, too, after the conference ended up in Guelph. Not to attend classes, but to help out so others could attend them.

While I knew Ray first, after The Word Guild started, my husband, Les, became involved as the treasurer. He started coming to our conferences and so forth, and thus also came to know Ray, not only as a friend but also an editor and mentor after Les decided to do some writing of his own.

I was honoured to write the foreward to Ray's memoir, A Difficult Passage: From prairie poverty to heights beyond. I still love the book. One of the disadvantages of indie publishing is not getting the attention your work might deserve.

I copied the foreward I wrote and posted it below. 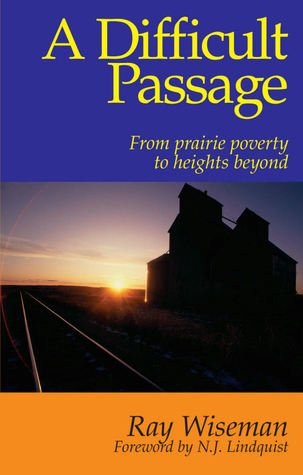 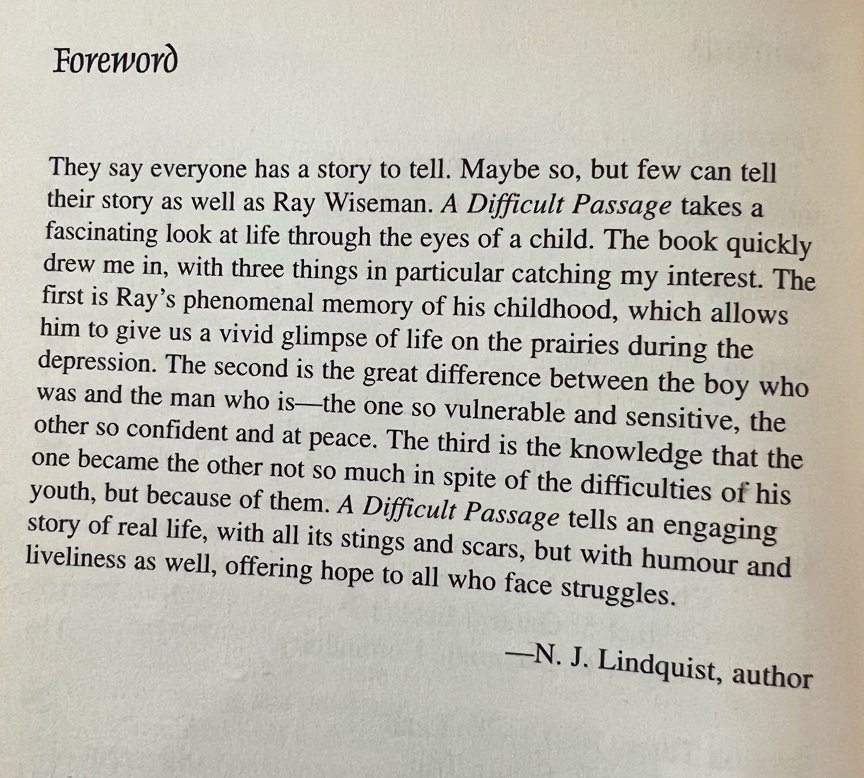 On June 17, 2009, at the Gala at the World Vision headquarters in Mississauga, Ontario, Ray received the 2009 Leslie K. Tarr Award for Outstanding Career Achievement. Named in honour of its first recipient, the late Leslie K. Tarr, a Toronto journalist, editor, and teacher, the Tarr Award celebrates a major career contribution to Christian writing and publishing in Canada. Previous recipients include author Rudy Wiebe and poet Margaret Avison, both two-time Governor General's Literary Award winners, and Janette Oke, whose inspirational novels have sold over 28 million copies.

Because Anna was so integral to Ray's career, largely because of his dyslexia, she was given her own award. 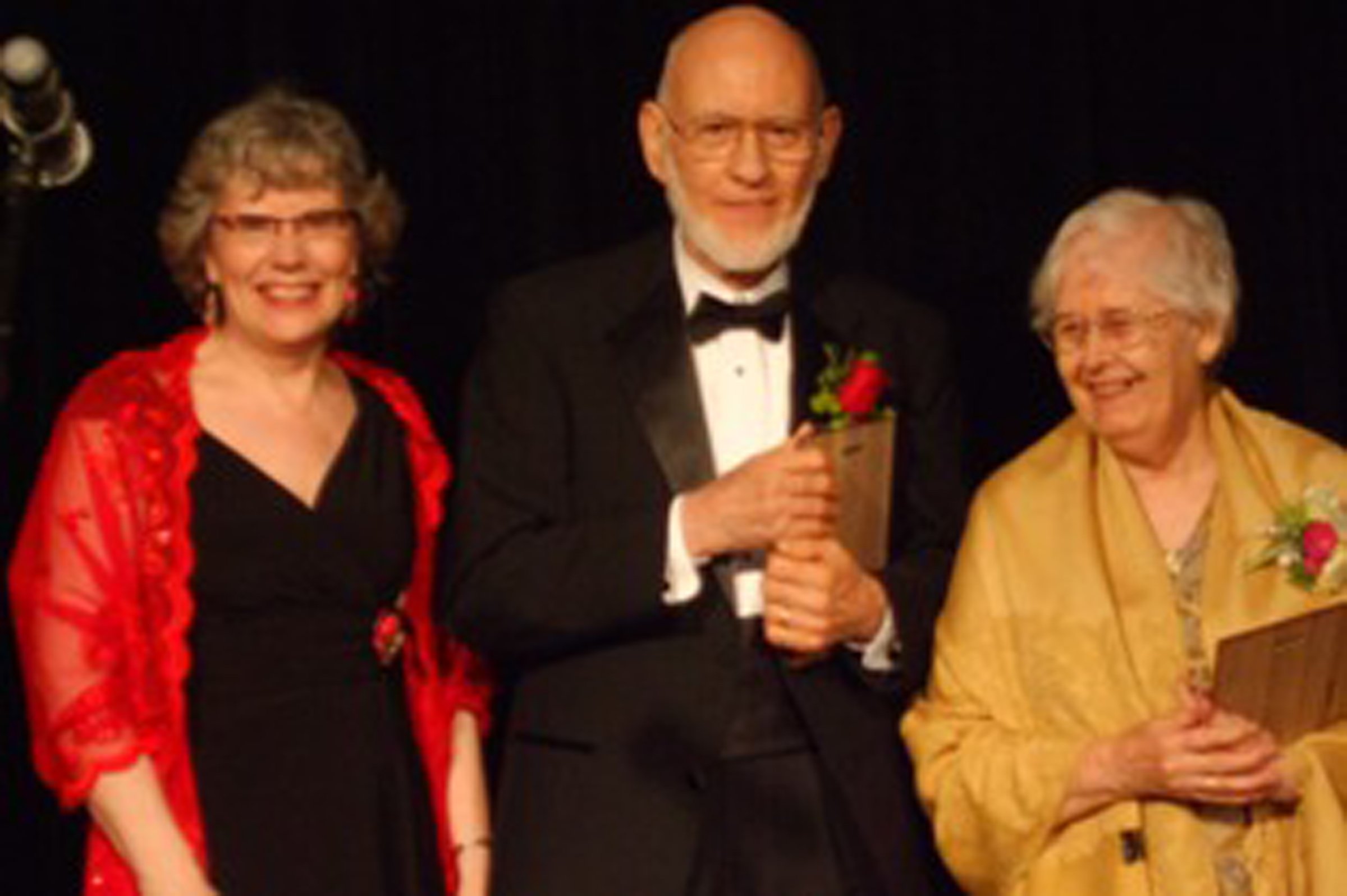 I was pleased to present Ray Wiseman with the 21st Leslie K. Tarr Award. Because of her contribution to his writing, his wife Anna received a special award, too!

Parts of the above were taken from a story I wrote on Ray in 2003 for my column "The Inside Story" in Christian Week. Here are a few things Ray told me that didn't get into that story (750 words is so short!):

And I'll add that he kind of liked being called a "curmudgeon" although anyone who knew him well knew that at heart he was actually more like a teddy bear.

In her latter years, Anna was diagnosed with Alzheimers and eventually had to be put into a nearby long term care home. She passed away on July 24, 2018.

One of Ray's last stories was "'Til Death Do Us Part," which was published in Hot Apple Cider with Cinnamon in 2017.

Here is a short excerpt:

“Don’t you love me any more? You don’t show affection; you never hug me.” The note inscribed in Anna’s flawless handwriting contained no salutation or signature. She had left it with the pen on her bedside table as though planning to return and write more. But the chances of that happening were one in a billion. She would no more remember writing the note than she would remember my hug that morning, or the “I love you” I had whispered in her ear.

When she wrote that note, I had loved Anna unconditionally for more than 60 years. But she had forgotten. And I had much more to learn about love....

Those of us who knew Ray and Anna will miss them both. But at the same time, we're happy they're no longer apart.

The last picture I have of Ray was taken December, 2017, at Roxanne's Reflections Book & Card Shop in Fergus, Ontario. We were promoting our latest anthology with some of the contributing writers. 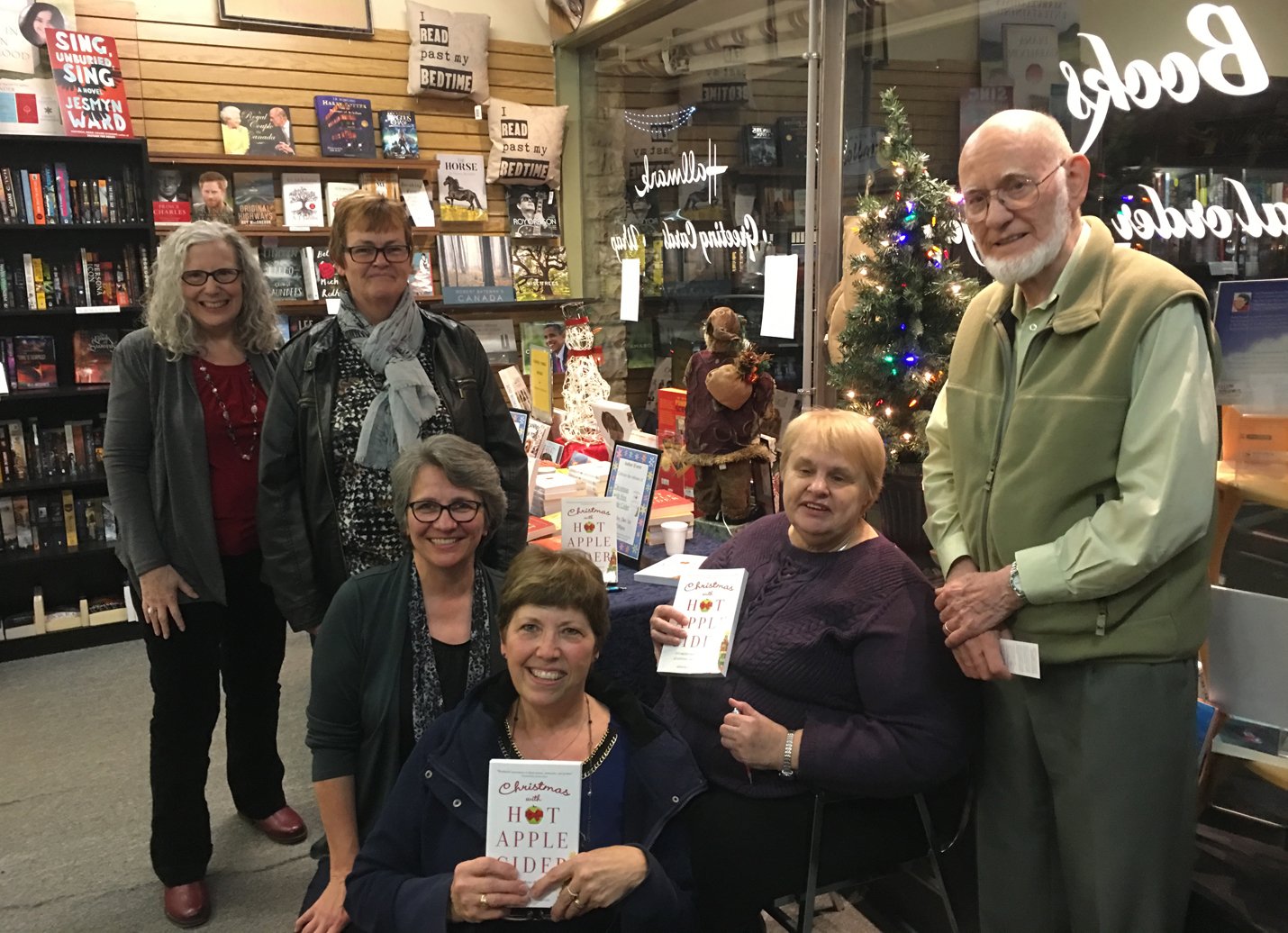 The Girls Who Went Away, part 2 – the effects of adoption on baby boomer birth mothers