Writing fiction would be easier if I wasn’t a Christian. I’d just sit down and write whatever I wanted. No problem. But I am a Christian. And it’s frequently been a problem.

When I began writing more than 35 years ago, I had a BA in English and the English medal for my graduating class. I also had a very s 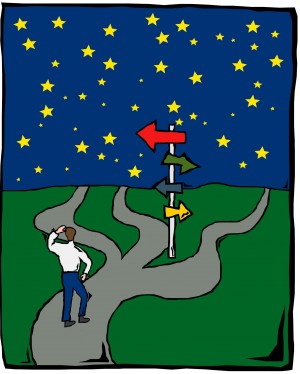 trong faith in God. It seemed natural to me to combine my knowledge of good literature with my faith.

I soon found, however, that not all fiction written by Christians was for me. Some books, like the Narnia series, delighted me. A few, like In His Steps, challenged me. But many of the others seemed trite and unrealistic. How could I write in a genre that I couldn’t whole-heartedly endorse? (Of course I didn’t like a lot of mainstream books either!)

As a Christian, did I need to write for the Christian market? Or should I just try to write great fiction, regardless of content or theme?

Over the years, I tried various things. Some worked and some didn’t. Eventually, I realized it wasn’t simply a Christian/secular issue, but a far more complex one. I had to understand the various kinds of fiction, determine whether I was going to write for the market or for myself, and strive to achieve excellence in all my work.

To begin with, I sorted the possible fiction markets into four categories and I decided I wouldn’t limit what I write but simply determine which ideas fit best in each category and write accordingly.

That which is commonly known as Christian fiction—stories that are comfortable and safe for evangelical Christians to read—no overt sex or violence or swearing, solid hope-filled themes, Christian characters another Christian can relate to, plot-lines which teach something good for a person who is already a Christian. Likely to be found primarily in Christian bookstores.

Many Christian writers, including myself, still sometimes find writing for category A frustrating. The restrictions can be stifling. Sometimes a character really needs to swear. Sometimes there can be no happy ending.

A surprising number of the Christian writers I’ve talked to (especially in Canada) say they don’t read a lot of Christian fiction because in the past so many of these stories have placed the message above the character and plot. These writers say they care more about well-written stories than stories with a Christian message. But the same authors who may not read much Christian fiction may still want to include a Christian perspective in the stories they write. Perhaps the hope is that the level of quality will be raised, and perhaps that is indeed happening.

Stories where the main theme or themes fit with Christianity—redemption, salvation, etc.—but the story may have elements that some evangelical Christians would be uncomfortable reading. Some will be close to category A (e.g. the Narnia books, the Mitford series), but others will have swearing or other unacceptable things in them. While some will be found in Christian bookstores, most will be found in secular bookstores or public libraries. (e.g. Susan Howatch.) These may be published by Christian companies, secular companies, or companies that have divisions in both areas.

Stories written by Christians but not specifically dealing with any Christian issues or themes. May be light or heavy. Likely to be found in only secular bookstores. (e.g. Dorothy Sayers, P. D. James). They are normally published by secular companies.

Stories with at least one character who comes to have a faith (or a stronger faith) in God. The evangelistic overtones can be overt or subtle. The goal is normally to have the reader make a similar decision. These stories are normally quite difficult to get published, especially if they are overtly evangelical. They are not really targeted for Christians and therefore may not interest Christian publishers, yet may be too Christian for a secular publisher/bookstore.

While many Christian writers veer toward this type of book, few publishers are actually looking for this kind of story.

As I struggled over the years to decide which of these categories is the best one, I finally realized that none of them is any better or more sacred than the others. In other words, God calls Christians to write in every one of these categories. Some of us will stick to a single category; others will write in two or even three categories; a few of us will write in all four. But every Christian doesn’t have to write Christian fiction; and every book written by a Christian doesn’t have to have the gospel message in it. If we seek God’s direction, strive for excellence, and ask him to use not only our writing but every part of our lives, we will be fulfilling his call to be fiction writers.

Re-posted from January 2006. Copyright N. J. Lindquist, 2013. This article was first published in Exchange magazine in 2002. Not to be reprinted without permission.

You might also want to read a similar article I also wrote for Exchange magazine: Walking the Fiction Tightrope: Writing with Faith and Honesty.