A Second Cup of Hot Apple Cider wins another award! 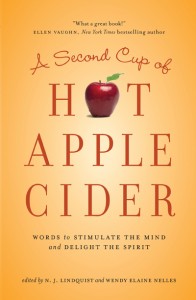 A Second Cup of Hot Apple Cider has broken records by being nominated for 27 awards—the most ever for a single book—in The Word Guild Canadian Christian Writing Awards!

The judges shortlisted 16 articles and stories by 15 writers.

Yes, one of them is my short story, "Twenty-five Years Later," which chronicles the reunion of four women in their 40s who haven't met since they graduated from college.

Plus, of course, I edited all the other entries, so I'm doubly pleased.

The award winners will be announced June 13 at The Word Guild Awards Gala at World Vision in Mississauga, Ontario.