I’m sitting here drinking lapsang souchong tea (the result of reading a book by Ron and Janet Benrey entitled Dead as a Scone, which is set in a tea museum in England (one of my all-time favorite cozy mysteries!).

I actually bought the tea thinking my husband would like it (he likes smoked meat and it has kind of a smoked flavour). He hates it: I love it: go figure.

I’m listening to John Berry sing “O Holy Night” on YouTube. Currently listening for the seventh time this morning. I watched the first couple, too. :) You can also hear it at his website. I love John Berry’s voice, but I also love the way he sings. It’s about the words and the song, not so much about him.

And I’m chatting via instant messaging with a close friend. Not idle chatter – we’re discussing interesting things – called ideas. I love talking with creative people who aren’t afraid to dream and envision and put varied thoughts together. Very cool.

My dog is in my room on her blanket, snoring slightly. She’s 16, blind, and pretty well deaf. We live in a three-story house (four if you count the basement) and she can go up the stairs but can’t find them to go down, so we have to watch she doesn’t accidentally fall down them – which explains the large boxes across the basement stairway and the fact I keep my second floor office door closed so she can’t leave without my knowing).

I have become a 24/7 caregiver for a dog. Not terrific, but she follows me wherever I go, does tricks for her cookies at night, pushes her popcorn bowl around the room when it’s empty (how many dogs do you know who have their own popcorn bowl?), and tosses rawhides in the air and then sniffs around until she finds them (unless they’re on top of a table or the piano, in which case we have to help). So she may be elderly, but she’s still doing pretty good, though we know it’s kind of week to week at this point. 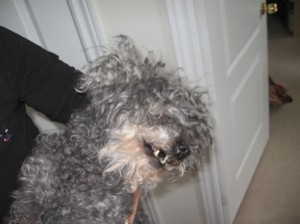 My oldest son just learned that the Lasik surgery he had on both eyes yesterday is successful and he can now legally drive without glasses. When you consider that he could barely walk across the room without glasses before, this is amazing!

My husband is at a fun swim meet he goes to every year, where participants swim all four strokes – freestyle, backstroke, breaststroke and butterfly – and then you add the times to get placings for each age group. He usually does well.

At 12:30. the Raptors are playing. What can I say? Since the moment Jay Triano was hired as an assistant coach, I’ve been waiting for him to get the opportunity to be the head coach. I’m hoping for good things. Now all we need is Steve Nash – could Steve and Jose platoon?

While Raptor watching, I’m going to do some editing on The Misadventures and Tribulations of Princess Persnickety and Her Friend Stefan. The story I started at the request of my granddaughters has somehow morphed into a 35,000 word chapter book with 27 chapters. Both my granddaughters will get copies for Christmas. Then I’ll have to decide what to do with it next.

Ahh. My idea of a perfect morning.