“To get through the hardest journey we need take only one step at a time, but we must keep on stepping."

My paternal grandmother was Mary Jane Sherritt, who was often called Jennie.

Unlike my paternal grandfather, who was born in Ireland and came to Canada on his own, Jennie was born in Canada to parents who were second and third generation Canadian.

You may recall from my last post that the Plantation of Ulster began as a political move by England (under King James VI) to retain his authority in Ireland by taking land from the Irish Catholics who had fought against English rule, and giving it to Scottish and English Protestants who had shown their loyalty to England. (Yes, it’s a lot more complicated than that! And plantation was a particularly nice word. Google it and you'll find many articles and whole books on the subject.) Here's one link.

Like my paternal grandfather's ancestors, Jennie's ancestors didn’t own their land, but were tenant farmers under Scottish and British landowners.

(Note: If you read historical novels, notice that very few of them are actually written about the tenant farmers and their families. Rather, they tend to show up as background characters, often uneducated or subservient. Hmm.)

The map below is free at Irish-Genealogy-Toolkit. (Click on the map to enlarge it.) 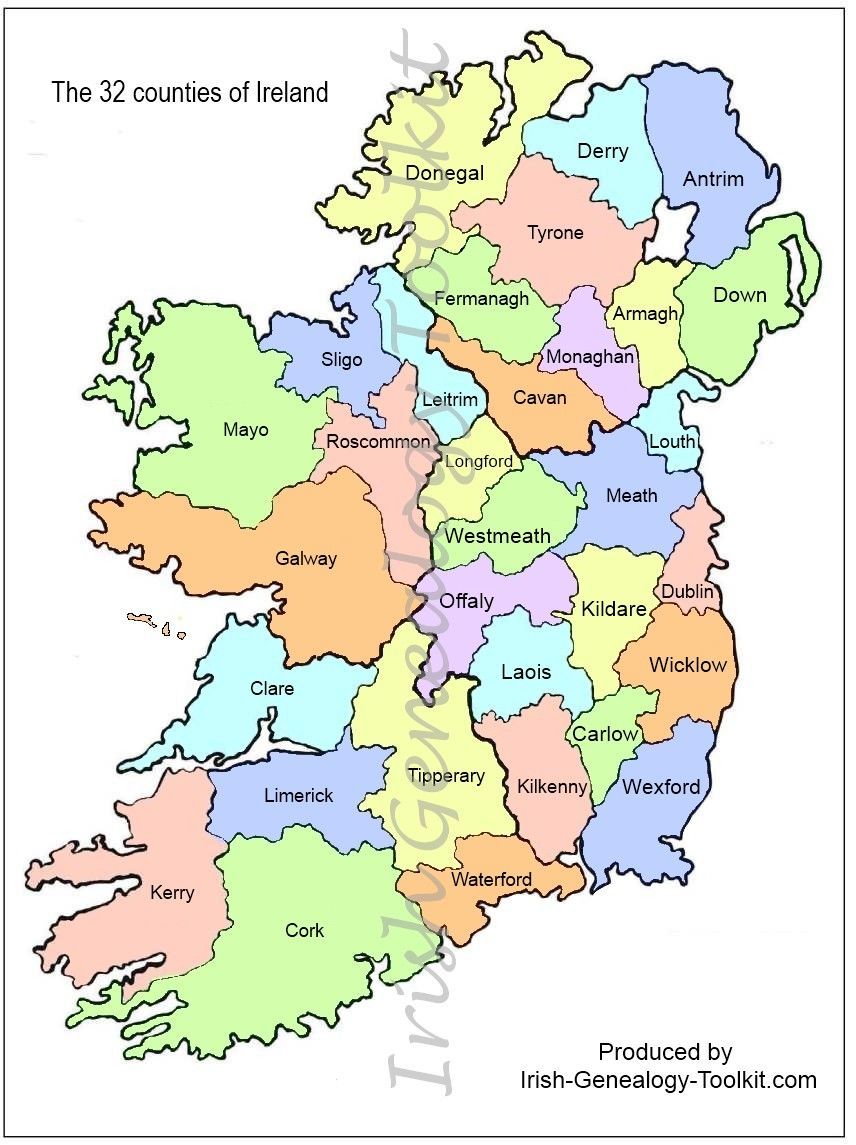 Since most land-owning families in Ireland had taken their estates by force in the years before the Plantation of Ulster, very few of them... had proper legal titles for them. As a result, in order to obtain such titles, they were required to forfeit a quarter of their lands. This policy was used... to break up Catholic Irish estates (especially the Gaelic ones) around the country... Small plantations were established in a few other areas, including County Leitrim (where some of my paternal grandmother's mother's family lived).

The early plantations in the 16th century tended to be based on small "exemplary" colonies. Plantations in 16th- and 17th-century Ireland involved the confiscation of land by the English crown and the colonization of this land with settlers from the island of Great Britain. There had already been smaller-scale immigration to Ireland as far back as the 12th century, which had resulted in a distinct ethnicity in Ireland known as the Old English, or Hiberno-Normans. Unofficial plantations carried out privately by landlords also took place, such as those in County Antrim and County Down (where my paternal grandfather's ancestors lived after coming from Scotland).

County Monaghan, where my paternal grandmother's father's ancestors lived, although not part of the province of Ulster, and not a plantation county, did receive Scots settlers in the 17th century as witness the First Monaghan Presbyterian Church in Monaghan Town which celebrated its Tercentenary in 1997.

Before I get into the actual families, a few thoughts that stood out to me as I researched their history:

But this wasn't new. Their ancestors had come to Ireland (whether by choice or not) to settle on land that had been taken from others.

And, quite possibly, further back, their ancestors had come from Normandy in the Norman conquest.

And before that? Who knows.

Right or wrong, throughout history, people have been pushed out of their homes, either by circumstances (famine, climate change, etc.) or by being forced out by other, more powerful, people.

And it continues to happen.

Maybe it's time we came up with a plan to help people who, like my parents' ancestors, were just trying to survive and care for their families.

I traced the Sherritt line back to John and Rachael Sherritt, but found nothing more on either of them or their ancestors. Not even Rachael’s maiden name.

It’s likely the Sherritt family came to Ireland from England, as I indicated above. It’s also very possible that they originally came from Normandy during the Norman invasion of England. Their original name could have been Sherard, Sherrard, Sherrat, Shirrard, Sherar Sheritt Sherrit, Shiel, Sheals, Shipp, Sirart, Scirart, or another variation.

In any case, there were Sherritts in the county of Cheshire, in North West England, during the Middle Ages. And a number of people from that area did moved to Ireland during or after the Plantation of Ulster.

(More about the Sherritt family history.)

John Sherritt was born around 1772 in the Townland of Drumucker, Carrigallen, County Leitrim, which is in the north of Ireland, just below County Fermanagh. I assume Drumucker was a farming area near the village of Carrigallen.

Rachael, his wife, was born in 1773, and without doubt came from the same area since farmers and farm labourers rarely moved around in those days.

According to the Irish census of 1821, which is at the Leitrum Geneology Centre, John and Rachael then had six living children ranging in age from eighteen to two. All of the children were born in Drumucker, which I assume means they had home births.

Jane’s parents appear to have been Edward Fee (1795-1830) and Margaret Fox (1795-1850). However, since Edward was presumably born in County Antrium and Margaret in County Leitrim, that may not make sense. Although it is possible that one of the families moved or that they met at a mutual friend or relative's home. The country was already struggling with lack of food by then so Edward's family might have moved further south.

Edward Fee’s father seems to have been a Thomas Fee (1750-1812), and his father might have been Peter Fee, but I found myself constantly getting lost in a maze trying to find out more about them, so I've given up for now. Let's just say there were several Fees with similar names and ages. And more than a few of them crossed the Atlantic.

More about the Fee family history

A Side Note: The Irish Potato Famine

It's important to note that the 1800s were very difficult for those in Ireland, with the Irish Potato Famine creating chaos in the mid-part of that century. Farming had always been a struggle, but in the middle of that century it became really bad. According to Britannica.com, as many as one million people in Ireland died from starvation or famine-related diseases. Up to two million people emigrated. By 1921, when Ireland was given independence, the population was half of what it had been in the early 1840s. 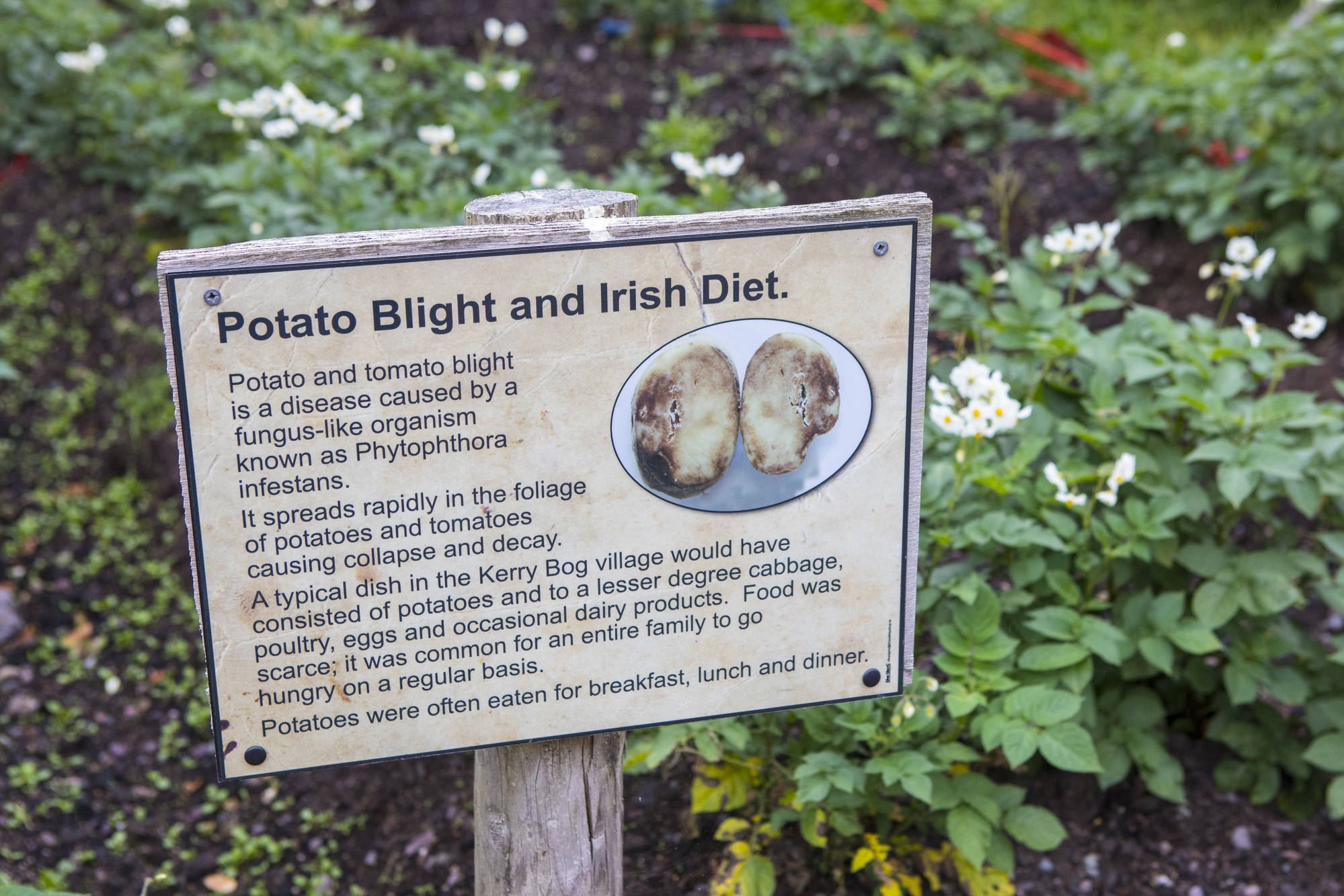 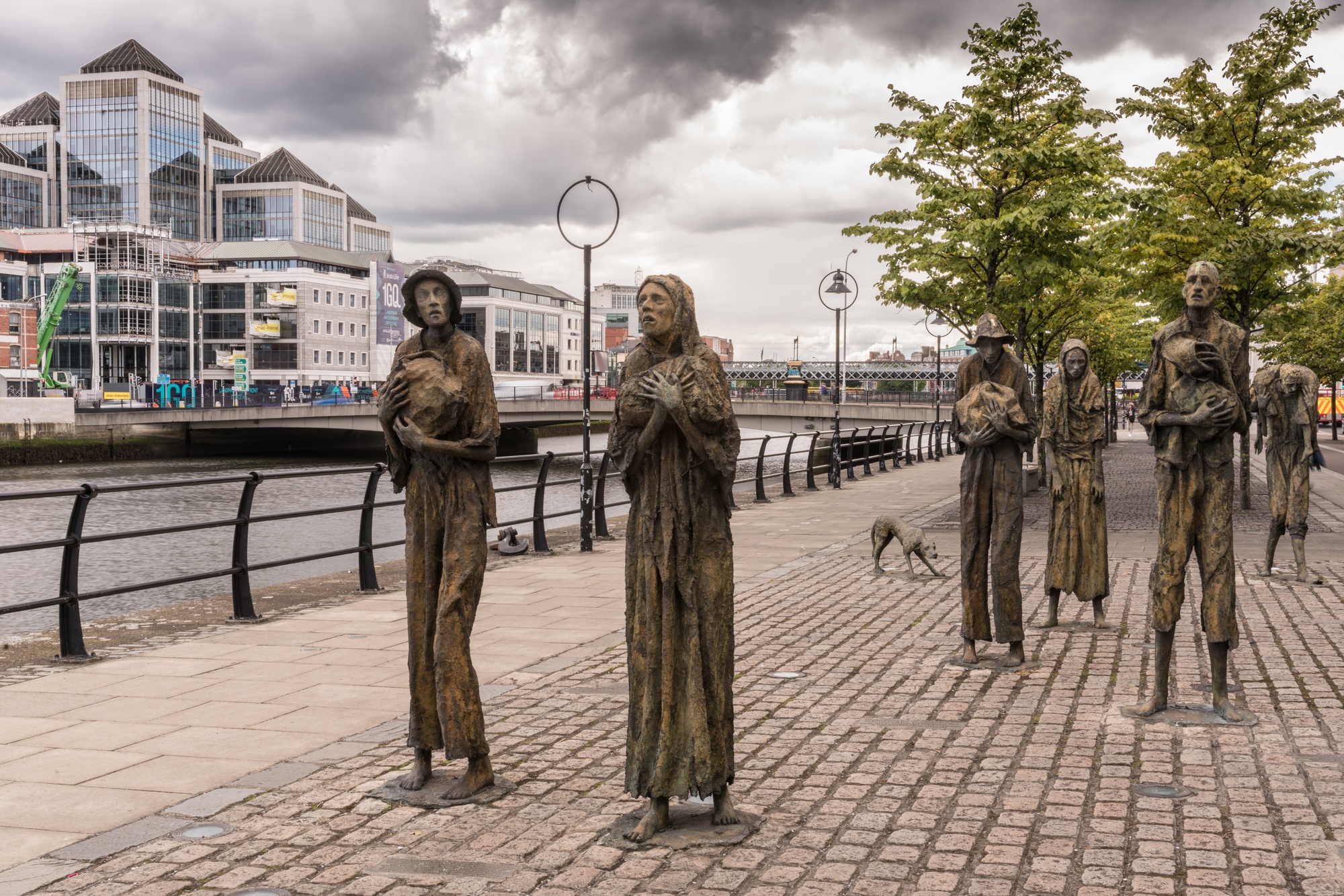 Thomas and Jane Sherritt came to Canada in about 1847, during the height of the Irish Potato Famine. On a ship similar to the one below.

Their youngest child, Jane, was baptized in England in 1845. In the baptismal record, her parents are called "travellers or sojourners." I wonder if the family had already begun the journey that would lead them to Canada.

"The Great Irish Potato Famine of 1847 was the cause of death, mainly from starvation, of over a million Irish. It was also the motivation behind the mass exodus of hundreds of thousands of Irish to North America. Because passage to Canada was less expensive than passage to the United States, Canada was the recipient of some of the most destitute and bereft Irish.

Passage was difficult for those making the 3,000 mile voyage from Ireland. Crammed into steerage for over six weeks, these "Coffin Ships" were a breeding ground for many diseases. The primary destination for most of these ships was the port of Québec and the mandatory stop at the quarantine island of Grosse Île. By June of 1847, the port of Québec became so overwhelmed, that dozens of ships carrying over 14,000 Irish queued for days to make landing. It is estimated that almost 5,000 Irish died on Grosse Île and it is known to be the largest Irish burial ground exclusive of Ireland.

The above is from the Library and Archives Canada website 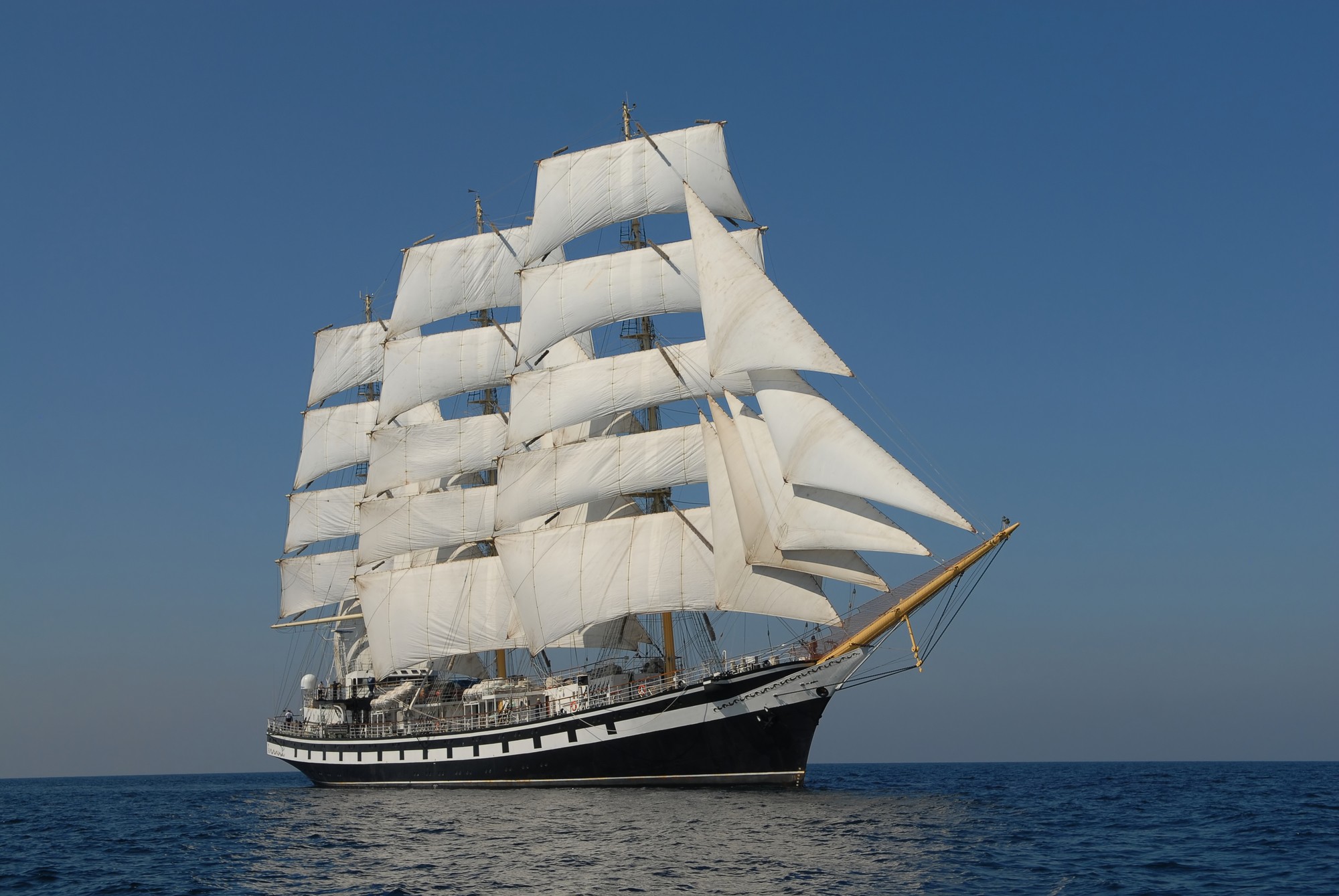 It would appear that Jane’s parents, Edward Fee and his wife Margaret emigrated as well, because they both died in 1850 in South Durham, a small farming community in the Eastern Townships of Quebec, south of Drummondville and east of Montreal. They were both 55. They might have died in an accident, but many immigrants died from illnesses exacerbated by their poor health.

There is also a Morgan Fee, who was married with four children, who died in Drummond in 1850, on Nov. 12. But he was 40, which would have made him too old to be their son Morgan. He could have been a brother of Edward's, or cousin.

My best guess is that the Sherritts and Fees had made their way to South Durham because they had family or friends who had homesteaded there earlier. However, they didn't stay. They likely made their way by boat, by wagon, or by walking, to Toronto, and from there to Hay Township.

For some reason, I assumed that all the ships coming to Canada were from the UK. So looked for more information. And got a surprise.

In 1878 Canadian-registered ships numbered 7196 and totalled 1 333 015 tons. Among the nations, Canada stood fourth in seagoing tonnage.

Hay Township, Ontario, was an area east of Lake Huron up to what is now Highway 4, and roughly between the towns of Grandbend and Goderich. It was opened up to settlers in 1835.

The 1851 Census also includes a new family member: one-year-old George (who would become my great grandfather).

In the same Census, and in fact on the same page as the Sherritts’ names, are listed several Fees.

Since Jane had an older brother named William and younger brothers named Edward and Walter, these might very well have been her brothers. It wasn’t at all unusual for related family members to emigrate together and settle near each other.

Thomas and Jane had one more son, born in April of 1854. He was followed, in January of 1858, by a daughter. Unfortunately, both mother and daughter died in July of that year, Jane on the 7th and her baby on the 25th.

Jane would have been 42 when she died. She had given birth to at least eight children, struggled through the Potato Famine, crossed the ocean as a refugee seeking a country where they might own their own home, homesteaded (likely living in a small log cabin), and looked after her husband and children while pregnant and after giving birth. I can’t begin to imagine how difficult that must have been.

In the 1861 Ontario Census, there are a large number of "Shirrels" (no doubt spelled the way the Census taker thought it sounded).

It appears that Thomas, now 46, may have remarried. It lists a Mary Sherritt, age 47.

A William Sherritt, the right age to be Thomas’s brother, is also in the census.

Two years earlier, on September 3, 1873, George Sherritt, the youngest living child of Thomas and Jane, and the first of their family to be born in Canada, married Sarah Jane Baird.