How Are You, Really?

You know you’re a writer,” said the toastmaster at a banquet I attended recently, “if, when you ask someone how they’re doing, you actually listen to the answer.”

But even though I'm a writer, I don’t always listen. I live, as you do, in a busy, multi-tasking world where the art of listening to one another seems to be dying.

An incident from twenty years ago still rattles inside my mind. 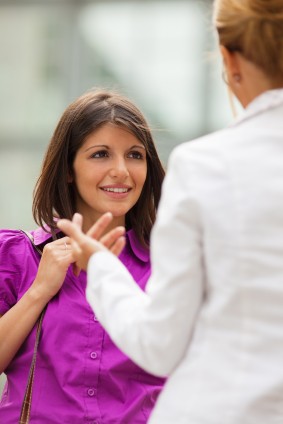 I'd dragged myself to church that day, overwhelmed by my responsibilities for my children, my mother, and my home; worried I was losing track of who I was; wondering if I’d ever feel on top of things again.
While I stood in the hallway wondering if I should stay or turn around and go back home, a smiling woman came up to me. “Hi," she said, "how are you? You look so nice today. Great outfit!” Without pausing for my response, she continued on her way.

I stood there, silently crying out after her. You didn’t see me. You only saw my clothes. Don’t you care about who I am inside the clothes? I was overwhelmed by a sudden longing for a church where people would look past my outward appearance and ask how I really felt.

Now, in all honesty, I have to admit that if I’d had time to respond, I likely would have said, “Fine!”

​I even said that at a doctor's appointment once, before catching myself and thinking, Wait a minute. If I was really fine, I wouldn't have made this appointment!

Of course, every culture has some form of greeting, and “How are you?” is as good as anything else. But the problem is that while we no longer expect a thoughtful response and would be shocked to get one, most of the time we’re actually longing to share our inner feelings with someone who wants to know—if only we could find that someone.

We all know people who are willing to engage in one-sided conversations where they talk about themselves but never listen to us. We know people who ask questions with the goal of learning things they can pass on to the world. But where do we find those who want a caring, two-way relationship?

Years ago, when I was coping with small children, a busy husband, and many responsibilities, I had a very sympathetic doctor who would ask, “How are you doing?” as if she expected an honest answer. When she said that, my tears would often start to flow—not because I was doing all that badly, but because it was so unusual to have someone who was genuinely concerned, and who wanted an honest answer.

But nice as it was, it was still one-sided. She was my doctor. It would have been weird for me to ask her how she was doing!

Some time ago, I heard psychologist and author Larry Crabb tell a story about passing a student in a hallway and offering the old faithful, “Hi, how are you?”

The student responded, as per custom, with a simple, “Fine,” and they both walked on.

But something prompted Larry to stop and call back, “No, I mean it. How are you, really?”

The student turned back and began to share with Larry the difficulties that were plaguing him. They ended up spending several hours together, sharing their hearts and encouraging one another.

I wonder what it would be like if, instead of asking the superficial, “Hi, how are you?” and accepting the “Fine” response, we occasionally stopped and asked, “No, how are you, really?”

And then we could look into the other person’s eyes and listen to the answer.