When N. J. started her cancer treatments in December of 2018, several people told us to expect “chemo brain”—a common side effect of chemotherapy treatments where the victim—oops, I mean “patient”—has difficulty focusing and thinking clearly.

What neither of us expected was that something like “chemo brain” would happen to me, her caregiver. 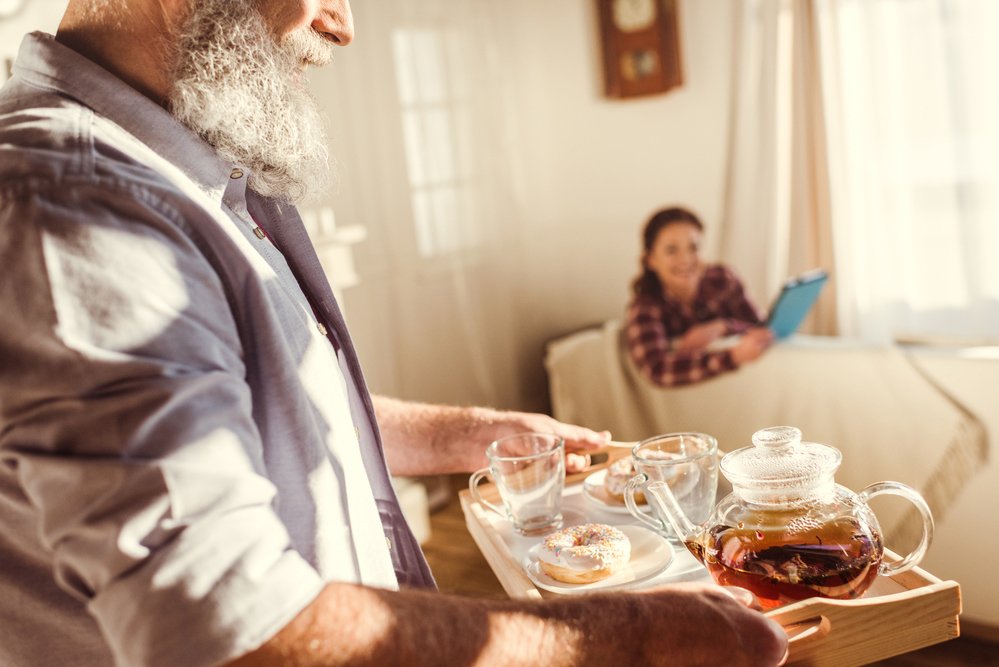 No, this isn't us! Sadly, no pictures like this were taken in our home.

I found that I could function well on tasks that are habitual, including talking to people. (I doubt if people I talked to realized how I was feeling.)

I managed to juggle times and locations so I could continue training four days a week for two Masters Provincial swim meets in the spring, while still being available when N. J. needed me. Since I’ve been swimming four times a week since I was in university, that was one of the things I needed to keep doing for both my physical and mental health. (Yes, I did well in both swim meets.)

I felt that I was doing a reasonable job of looking after N. J.:

But when it came to some of the other things that I wanted (needed) to do—things that required what I consider my strong points: creativity, problem solving, persistence—I found myself coming short.

I had a long list of items that I really wanted to do, but I couldn’t get anywhere with them because, honestly, I just didn’t care enough.

The apathy I felt toward those things was really disturbing. I didn’t feel sad, or gloomy. I. Just. Didn’t. Care.

For example, there was a point in the spring when I had a letter that I should have written and sent two weeks earlier. But it wasn’t ready and I didn’t care. Well, I guess I did care intellectually, but not enough to actually focus on finishing the letter and sending it.

I’d sit down to work on it and be immediately distracted, and end up doing something mindless—reading, watching a movie, watching sports on TV, playing Wordscape, etc. I called it being distracted. And that was clearly a symptom. But it was more than that.

One day, I started thinking I should invite some of our grandsons over for a play day—how many grandparents have a drum set and a Lego room in their basement? But I had no energy to even set something up, and, although I love spending time with my grandkids, I didn’t care.

That was the moment when I realized what was happening.

Before I left IBM in the spring of 2009, I’d gone through a long, difficult time at work, mostly due to ongoing conflict with my boss because of tasks that didn’t fit my skills.

Unfortunately, it led to my neglecting my job.

Then, one Tuesday in January of 2009, I heard Clara Hughes (winner of multiple Olympic medals) talking about her experience with depression on Bell Let’s Talk Day (a national awareness day for mental health).

Clara started listing some of the symptoms of depression that she had experienced and I sat there going, “Got it. Got it. Got it….”

Until that moment, I’d believed depression was about feeling sad and sorry for yourself, and that wasn’t the case for me. I was frustrated and somewhat angry, but not sad. It was an eye opener to realize that I was experiencing depression.

I talked to our family doctor and he explained that I could get counselling or medicines to address it, but I found that, for me, just naming it was enough for me to deal with it.

I did some research on depression and one article hit home for me. The author said depression can be related to medical or psychological reasons, but sometimes it is just a kick in the pants to get out of a situation you shouldn’t be in. That was certainly the case for me at work.

I’m not sure how that advice fits the recent cancer situation, other than living with a cancer patient was definitely not a situation I wanted to be in, but since neither of us had any choice in the matter, we just had to get through it.

Anyway, because of that earlier experience, I was able to relax and accept what was happening to me this time—to realize that it wasn’t the time to do other things, and to just focus on what mattered—N. J.’s health.

Now, I wonder if perhaps the apathy I felt, rather than being a mental health problem, was actually a mental health solution—a coping mechanism. If I’d tried to do everything AND be a caregiver, I would probably have self-destructed.

What I needed to do was talk about it and set expectations with the people who normally counted on me. Thank goodness, “My wife has cancer!” gets pretty universal understanding. I stopped feeling guilty about using that excuse to explain my neglect of other things.

As I think about it today, I can see that there was a sense of internal prioritizing going on, maybe subconsciously.

Perhaps it was a way for my body/spirit to keep me from being overwhelmed by the emotions involved with having my partner go through such trauma. I was able to ignore things that weren’t actual emergencies without the feeling of responsibility (guilt?) that I would normally feel.

A good friend of mine died in his sleep two years ago. Although he was in his 80s, he was seemingly in good health, and his death was a great shock to his friends and family. I’d had coffee with him the day before he died and everything seemed fine.

His wife had had Alzheimer’s for a number of years, and even though he'd hired a caregiver for her, and the caregiver stayed on after he eventually had to put his wife into a nursing home, he still spent most of his time sitting with his wife in the home.

Just last week, I was talking to my friend's daughter-in-law, and she told me that she felt he had died from "caregiver burnout." I can see that possibility, especially since there was no hope for his wife's recovery.

Fortunately for us, there is light at the end of the tunnel. The side effects from the surgery, chemotherapy, and radiation have greatly lessened and N. J. seems to be returning to her usual self. 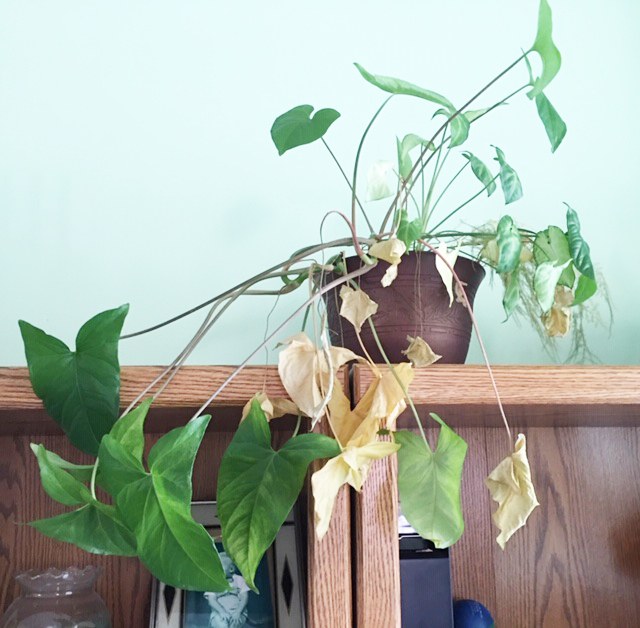 This picture of a plant from our family room illustrates what the last year has been like.

The dead leaves remind me of the areas of neglect that have been part of our lives for the past year.

But the green leaves demonstrate that there is still beauty and growth in our lives.

Now, our challenge is to trim the “dead leaves” from our lives and nurture the green ones.

My depression/apathy of the past year is pretty much over.

I’ve started to address some of the things that I had ignored for so long.

But I am going to miss having a good excuse for avoiding things I really don’t want to do. :)

Knowing what I know now, if I were to give advice to others who find themselves in a similar situation, I would say: 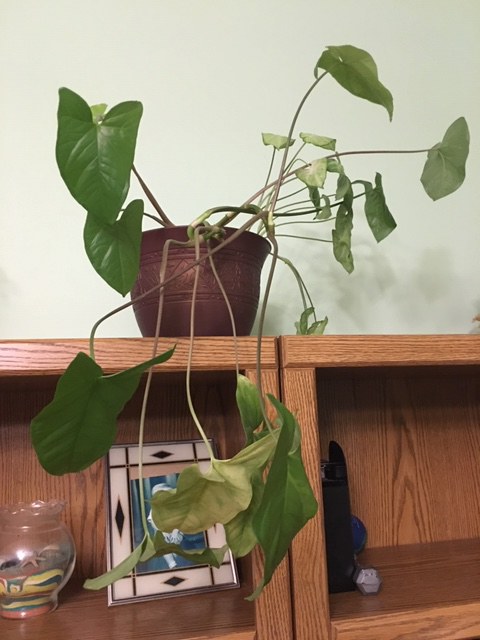 In case you were worried, the dead leaves are gone and N. J. has watered the plant a few times.