A Fun Memory from an Early God Uses Ink Conference (Before It Was Called Write! Canada)

In the fall of 1995, when Audrey Dorsch resigned as the editor of Faith Today and director of the God Uses Ink Conference, I was part of the planning committee.

Even though Faith Today was short-staffed and assistant editor Marianne Meed Ward knew she couldn’t handle the workload of both putting out the magazine and organizing the conference, we decided to go ahead and hold the 1996 conference. Larry Matthews, the editor of The Canadian Baptist, had been part of the committee, and agreed to be the conference director that year. But things were a bit rushed.

Back then, the conference didn’t actually start until 5:00 pm on Thursday. A few years earlier, we’d started having an early bird workshop for those who wanted to come earlier. We would charter a bus for an off-site trip to an interesting location, and then give people an hour or so to write something based on what they’d seen and heard. Then the organizer would judge the stories and we’d give prizes. I remember going on field trips to a mission in downtown Hamilton, The Hamilton Spectator, an historic church, and a book distributor’s warehouse.

Anyway, we decided we didn’t have time to organize a field trip for this year, so I volunteered to do something on-site (which was then Redeemer College in Ancaster.)

A brand new writer whose second novel had just been published had written to say she was interested in coming to the conference and could possibly teach a workshop. She added that she’d be willing to do whatever we wanted.

I phoned her and asked if she’d be willing to be interviewed at our “early-bird” workshop—with the goal of teaching people how to interview someone. Then I’d have the participants either write a profile on her based on the interview or an article on how to do a good interview. She said sure. I asked her if she could act a little. She said she was game to try.

Fast forward a few months to Redeemer College in Ancaster on a Thursday afternoon in June, at 2:00 pm. 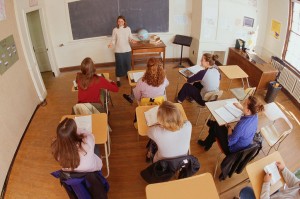 Picture a large, brightly-lit college classroom with the participants at desks. The only entrance to the room is a door on the wall to the right, about mid-way. I’m at the front of the room with a blackboard on the wall behind me. I’ve moved the podium to one side and set up two chairs at the front for the interview. About 25 or 30 people are present.

I begin by talking about some good habits for writers.

“Read a lot. Read articles and books on writing; great literature; popular work; and of course, read whatever you want to write. Always have a notebook with you so you can jot down any ideas you get. Be attentive. Eavesdrop on people’s conversation when you’re in malls or standing in line at Tim Horton’s. Notice things you’ll be able to use la—“

There’s a sharp knock at the door.

I walk over and open it. A woman is standing there. I ask if she’s come for the workshop and she says. “No, I was using the room earlier and I think I left my Bible in it. I’m so sorry to bother you, but, please, can I just grab it? I won’t take a second.”

I tell her to go ahead. She walks to the front right corner of the room, and takes a Bible from a shelf inside the podium. The entire time she’s in the room, she’s apologizing to the room at large and telling everyone about leaving her Bible and just wanting to get it and go. She finally walks out the door and closes it after a last apology.

As the group looks back at me, I say, “We were just talking about noticing things. So what I want you to do is to write down everything you noticed about that woman and what she did.”

I give them a few minutes to write, and then have them share what they recalled. Few of them get the clothing right. Some get her hair colour right, but many don’t. Most don’t remember what she was looking for or what she said.

I go to the door and the woman is standing on the other side. I ask her to repeat what she did while people go over what they remembered. She not only repeats what she did and said, but does it perfectly. At the end, instead of leaving, she comes to stand beside me. One woman brings down the house by asking, “Are you sure that’s the same person who was here before?”

Powers of observation. Yes, very important for a writer.

I then introduce the women. She is Linda Hall, a Canadian author living in New Brunswick, who has three books out: a science fiction novel called The Josiah Files and the first two books in her RCMP mystery series, August Gamble and November Veil. I let them know that Linda has agreed to be interviewed by me so that we can go over the techniques of doing an interview while learning about a Canadian author. Linda and I sit down on the two chairs at the front.

I pull November Veil out of my briefcase and say, “I see you have a new mystery out. Is it your first book?”

She says no and tells us a little about The Josiah Files.

I say, “So, the new book is science fiction, too?”

She patiently explains that the new book is a mystery.

“I really wish I’d had time to read if before today,” I say. “Way too busy getting ready for the conference.” I look at the back of the book and read a bit of the description aloud. Then I say, “Oh, yes, it says here that it has an RCMP officer in it. So it takes place in Canada?”

“Yes,” she says. “It’s set in Alberta, where we lived before moving to New Brunswick.”

She begins to tell me, but I’m thumbing through the book and notice something interesting. “Where did you get the idea for this character?” I ask. “You know, I’m working on a mystery myself. About a body found in a Japanese garden.”

“So, have you always lived in the Maritimes?” I ask.

Linda is about to answer (patiently, I might add) when a young man seated in the middle of the room holds up his hand.

“Yes,” he says. “Have you ever done an interview before?”

There are sharp intakes of breath throughout the room. A few people’s eyes throw imaginary daggers at the rude young man.

“Well, I find that hard to believe.”

The young man leaps to his feet, comes right up to the front of the class, and sits in my chair. I look at him for a moment and then walk down the side of the room to a desk at the back, where I sit down.

The young man then proceeds to do a great interview, asking all the right questions. He’s actually read the book! And Linda responds beautifully, giving interesting, informative answers. At the end, I come up and introduce the young man, who is, in fact, my son Mark, a student at Providence College at that time, studying music and drama.

I thank Linda and Mark for participating in the workshop and for demonstrating amazing acting skills at the same time. How they both kept a straight face throughout the entire time is beyond me! (Yes, it was all planned ahead of time!)

I then let the participants know they have an hour to write something based on the interview. Half write about Linda, but the rest write about what they learned about interviewing someone. And all of them say they had a good time, though a few were apparently ready to defend me and confront the young man despite my appalling interview.

And that is one of my fondest, “fun” memories of the conference, as well as the way I met Linda Hall, who’s been a good friend of mine ever since.

Check out Linda’s books. There are a lot more now!

As for Mark, he’s currently working on two books, and we’re hoping for publication one of these days.