Review of the book, Off the Map

If you’ve ever watched in frustration wondering why on earth someone in an abusive relationship didn’t get out at the first sign of trouble, I have a book you need to read.

The title is Off the Map: Follow Me Out of Domestic Abuse. 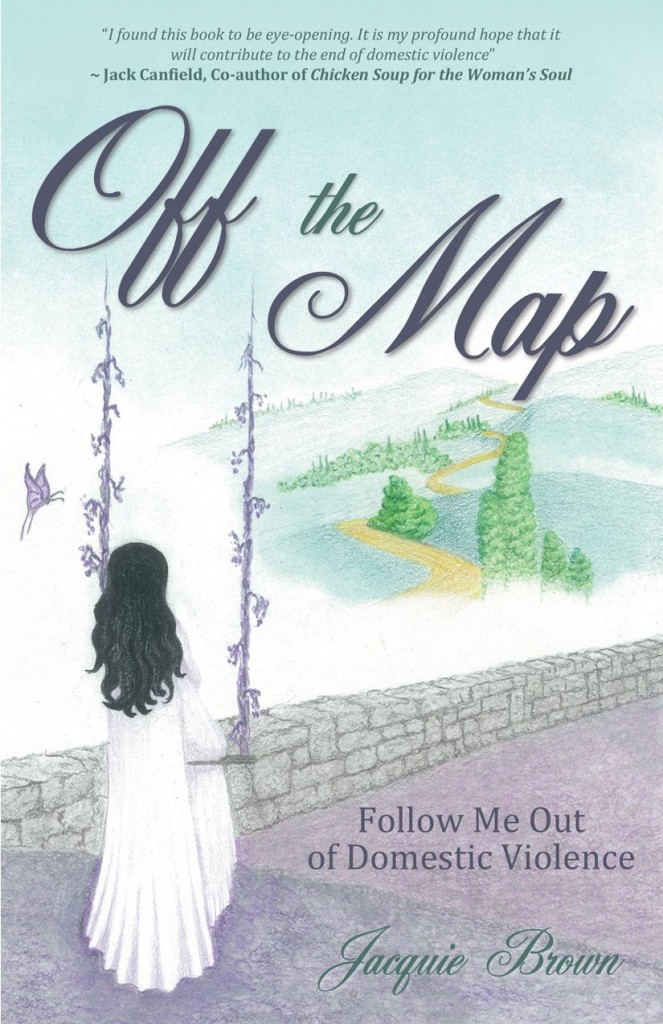 Jacquie Brown, the woman who wrote the book, says she was in an abusive marriage for “decades” – which means at least 20 years.

I can’t imagine being in that kind of situation for an hour, never mind more than 20 years.

Why didn’t she run for help the first time her husband hit her? If that wasn’t possible, why not escape the first time he left the house? Why not phone the police, call her parents, do whatever was necessary to get herself, and eventually her children, out of the situation they were in? A situation that only got worse, not better.

As I read this book, I found answers for all my questions.

And the answers all made sense, and led me to much greater understanding of abuse victims.

How I found the book

I first met Jacquie Brown when she became a member of The Word Guild volunteered to help organize Write! Canada 2012. Since Jacquie lived in Alberta, all of our conversations were either through email or online. She came across as intelligent and capable.

When she mentioned she was self-publishing a book about domestic abuse, I have to say I had the usual reaction I have when someone tells me they have a book they’re self-publishing. I cringed just a little. But of course, I didn’t say anything. I’m always encouraging, and hoping for the best.

The good news was she seemed to be doing the right things in terms of learning about marketing, and she’d selected Word Alive Publishing, which in my opinion does a far better job than most self-publishing companies. But still… I imagined a sad tale of abuse and despair, with hopefully a happy ending.

Write! Canada 2012 came and went, and although she’d been helpful in some of the planning, she wasn’t able to come.

Since Write! Canada 2012 was the last conference of the 11 I directed, I literally pushed all thought of it out of my mind in order to focus on other things. I lost touch with Jacquie.

Fast forward a year, to the 2013 Word Awards Gala, sponsored by The Word Guild, and an attractive woman comes to speak to me. She says, “I’m Jacquie and I was part of your planning team for Write! Canada 2012.” Then she introduces me to her husband, a tall, nice-looking man. My mind is blank. I have no idea what she’s talking about. I smile and say something polite.

A short time later, I walk by the table featuring all the books that are short-listed for awards, and right at the front I see a name, “Jacquie Brown.” And then the title and the words “domestic abuse.” Doh! Facepalm.

I take a quick look at the book and am immediately impressed. She’s not only finished her book, but it looks good!

I have to wait until the end of the awards program, but then I rush to find Jacquie, explain my momentary amnesia, and talk with her and her husband for a while.

Later, I buy her book, and am blown away.

Instead of a soppy story of another abuse victim, she’s written a brilliant show and tell explanation of why women who are in abusive relationships have so much difficulty getting out.

First she gives us a chapter showing us a glimpse into her life; then she has a chapter that explains what she calls the “underlying dynamics or aspects of domestic violence.” Then another part of her story, and another explanation, and so forth, right up to the very satisfactory but not the least bit soppy happy ending.

In her introduction, Jacquie says: “Off the Map demystifies domestic violence. It brings to light how we are ensnared and why we stay trapped. It also reveals our self-destructive coping mechanisms and ultimately the way out of the dungeon to discover the treasure of life.” (p.xiii)

She also explains that all violence isn’t physical beatings. There are many other ways an abuser can hold someone captive.

The book offers a number of very helpful lists, including:

As someone who’s never been in an abusive domestic relationship, and found it difficult to understand how an intelligent person could allow herself to be trapped in this way, I found the book eye-opening, and I began to understand to a much greater degree than before how pretty well anyone could wind up be abused without necessarily realizing what was happening.

One thing that particularly caught my attention were the relationship of domestic abuse to things like the Stockholm syndrome, and how there can be a cycle of kindness mixed in with the abuse that creates dependency and keeps the victim ambivalent about the abuser and unable to break free.

The most mind-blowing part for me was when Jacquie linked long-term abuse to C-PTSD (Complex Post Traumatic Stress Syndrome). On page 93, Jacquie says, “A woman suffering in a relationship of domestic violence is similar to a soldier’s experience as a prisoner of war. Both undergo prolonged exposure to traumatic experiences and both can develop C-PTSD.”  She then goes on to explain how chemicals in the brain (such as serotonin, dopamine, noradrenaline), are impacted, and how this can lead to a variety of negative things, including forgetfulness, depression, detachment, self-condemnation, loss of identity, hopelessness, etc.

Why everyone needs to read this book

I highly recommend this book to anyone who:

If you didn’t fit into any of the above categories, Yes, I recommend it for you, too!